The Fokker D.VIII (also EV ) was a German fighter aircraft in World War I in 1918. The single-seater came to the front too late to have a decisive influence on the course of the air war. The high-decker was designed by Reinhold Platz at Fokker .

Fokker D.VIII, the "flying razor" of the German air force in 1918

At the end of 1917, the Allies reached such high production numbers that the Germans could no longer hold air sovereignty. In January 1918, more and more modern Allied machines reached the front, forcing the Germans on the defensive.

The Germans therefore announced a competition for a new hunter with the 160 hp Mercedes D III in- line engine . The clear winner was the Fokker D.VII , which went into production immediately. However, Daimler engine production was limited - in April 1918 it was therefore decided to start developing a machine with alternative engines in parallel.

At the second comparison flight in Berlin, Fokker showed his test aircraft V.26 and V.28, the former, however, with a weak 110 HP Oberursel UR.II rotary engine . The wing layout of the V26 was similar to that of the V25, but was now mounted in a high-wing arrangement, which improved the view below. The V.28 was equipped with the Oberursel UR.III (145 HP) or Goebel Goe.III (160 HP) rotary engines. This design was able to achieve the performance of the fastest Allied fighters due to the low air resistance.

Many machines took part in the comparison flight, with Fokker's V.26 monoplane showing outstanding performance. It received the designation Fokker EV. Only the double-decker construction Siemens-Schuckert D.IV could still beat the EV after the competition.

The D.VIII was very similar to the D.VII. It could reach 6,000 m in 16 minutes and was very maneuverable, even though the Siemens-Schuckert proved to be even more agile. Shortly before the end of the war, 400 machines with UR III and Goe III were ordered, but all machines built were ultimately equipped with the weaker UR II engines.

The first production machines reached Jagdstaffel 6 at the end of July 1918 and went to the front almost immediately. On August 17, 1918 Emil Rolff achieved an aerial victory with an EV. Two days later, however, he died of a broken wing of the machine. Two other machines also crashed with surface breaks. On August 24th the EV was withdrawn from the front. The grand pianos had been made for Fokker by the Perzina brothers . The problem with the breaks was that when it rained, the wings quickly soaked up with water and lost their stability.

However, after improvements in the treatment of the wing wood, production was resumed in October 1918 and the aircraft was now called the D.VIII . On October 24th, the first machines started for aerial combat. Soon the Allied pilots referred to the extremely dangerous EV in aerial combat as the “flying razor” . 85 machines were probably delivered, but the war ended three weeks later.

A total of 289 machines were built.

Eight machines went to the Polish Air Force after the war and fought in the Polish-Soviet War of 1919–1920. The Red Army captured a machine. There were other aircraft in Holland, the USA, Italy, Japan and England. 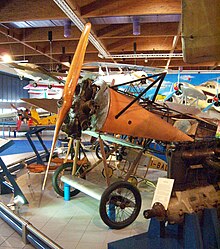 The body of a machine is now in the Museo dell'aeronautica Gianni Caproni in Trento , Italy . It is the world's only preserved original hull of the machine.

A complete machine is now in the Army Aviation Museum in Fort Rucker, Alabama , United States .

List of aircraft types made by the manufacturer Fokker