The Pfalz D.XII was a fighter aircraft of the Pfalz Flugzeugwerke , which was used by the German air force in the final phase of the First World War .

At the beginning of 1918 the Idflieg ( inspection of the air force ) sent a detailed study of the French fighter plane SPAD S.VII and its wing construction to the German aircraft manufacturers. The 15-strong engineering team of the aircraft manufacturer Pfalz, led by the Eversbusch brothers and chief engineer Geringer, had been working on eleven different designs since November 1917, and designer E. Eversbusch finally presented a prototype based on the Pfalz D.III with wings that replicated those of the SPAD were.

As with the D.III, the designers also used the Mercedes D IIIa engine for the new prototype , albeit in the more powerful 180 hp D.IIIaü version. This machine, known as the Pfalz D.XI , had the very stable plywood hull with an oval cross-section, which is typical of the Pfalz D.III, but, in contrast to its predecessor, had an automobile front cooler instead of the wing cooler, similar to the Fokker D.VII . The prototype made its maiden flight in March 1918, but did not go into series production.

Under the impression of the dominating Fokker D.VII, further modifications were made, and from May 27 to June 21, 1918, two Pfalz D.XII prototypes with Mercedes D IIIa and BMW IIIa engines and two air-cooled, synchronized LMGs were built MG 08/15 ( 7.92 mm ) made available for the second fighter aircraft competition in Adlershof , where these were compared with the various types of fighter aircraft by experienced front-line pilots. The type test for official acceptance took place on June 19, 1918. After the numerous test flights, only Ernst Udet spoke out in favor of the D.XII with a BMW engine. He preferred it to the Fokker D.VII, and the Bavarian government also put pressure (the Pfalz (Bavaria) belonged to the Kingdom of Bavaria ), so that Pfalz received a large order of 500 pieces for the D.XII. Since the BMW engines were preferentially assigned for the construction of the Fokker D.VII, Pfalz had to install the somewhat weaker Mercedes D III engine.

The required monthly installment of 150 pieces did not reach the production of the Pfalz-Werke, although the production of the Pfalz D.IIIa had been stopped in favor of the D.XII. Problems with the radiator, which used vertical tubes instead of the usual honeycomb cells, delayed delivery of the first D.XII until the end of June when the first machines were delivered to the front. The first 200 copies had a rectangular tail fin, while later aircraft received a larger and rounded rudder. Production increased in August and September and more than 200 aircraft per month now left the assembly halls.

The D.XII arrived at the front in July 1918. The D.XII flew ten fighter squadrons, including the four of the Bavarian Jagdgeschwader IV. Often the units were mixed with other types, only the Jastas operating on quieter front sections were uniformly equipped with D.XII.

The D.XII was a significant improvement over the outdated Albatros DV , Fokker Dr.I and Pfalz D.III , but the fighter pilots generally preferred the Fokker D.VII . Lieutenant Rudolf Stark, leader of the Jasta 35, instructed his pilots to always remain under the squadron's Fokkers as a precaution. The pilots of the 71st squadron refused to take over the Pfalz D.XII so decisively that a works pilot had to compete in a mock dogfight against the squadron leader with his Fokker D.VII and was defeated. Outwardly, however, the Pfalz D.XII could quickly be confused with the Fokker D.VII. The machine was very stable and experienced pilots could keep pace with the Fokkern or even overtake it. However, the Pfalz D.XII fighters were heavier, climbed more slowly, showed themselves to be less agile, lost height in turns or even tilted and reacted clumsily and clumsily to the control stick than the sensitive Fokker.

She needed a longer take-off run, and the landing was difficult, especially since the undercarriage was not particularly stable. The mechanics complained about the cumbersome bracing of the two-legged wings, which meant significantly more maintenance than the tension-free Fokker with its self-supporting wings.

After the war, some D.XII made their way to Poland, where they were used in the war against Russia. About 175 Pfalz D.XII were handed over to the Allies, some of them ended up in the USA and Canada for technical tests . Two D.XII were sold to Crawford Airplane & Supply Co. in Venice / California. These machines, used in the Hell's Angels and Dawn Patrol films, are on display today at the National Air and Space Museum and the Seattle Museum of Flight. The Musée de l'Air et de l'Espace in Paris and the Australian War Memorial in Canberra also have a Pfalz D.XII. 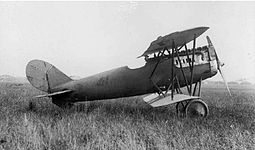 As a variant of the D.XII, the Pfalz D.XIII and Pfalz D.XIV appeared with the much heavier 200 HP Benz Bz.IVü engine and therefore extended wings with a larger span and extended ailerons. The prototypes were sent to Adlershof for the aircraft competition in October 1918. The D.XIV was a bit more manoeuvrable, but difficult to land and, overall, did not promise any significant improvement over the D.XII. In addition, the Benz Bz.IV engine was required for the heavy reconnaissance aircraft. Palatinate received a production release, but production did not take place.

As a variant of the D.XIV, various prototypes of a Pfalz D.XV with 185 HP BMW IIIa engine were developed. The machine was similar to the D.XII, but the lower wings were suspended on N-shaped struts below the fuselage. A week before the end of the war, two test aircraft were tested at the third fighter aircraft competition in Berlin-Adlershof; they were found to be extremely maneuverable and capable, but difficult to land. The intended order was no longer carried out due to the end of the war.