This article deals with the British fighter plane, for the band named after it see Sopwith Camel (band) . 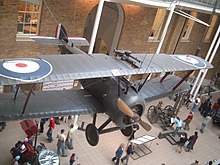 The Sopwith F.1 Camel is a biplane and is considered the most successful British fighter aircraft of the First World War . It was designed and built by the Sopwith Aviation Company . With it, Allied pilots succeeded in shooting down 1,294 aircraft of the Central Powers.

The Camel was a larger and heavier development of the Sopwith Pup . The official name was Sopwith Biplane F.1 ; The plane got the nickname Camel because of the hump-like fairings of the two machine guns. At a not exactly known time, the nickname became the official name.

The first flight was in December 1916.

A total of 5490 pieces of this aircraft were made, some of which still exist today.

The hull was made of wood. The planking consisted of metal in the front area, while the area behind the cockpit was planked with plywood. The rest of the fuselage was covered with fabric.

The plane was a single-handled biplane . The wings were made of wood with fabric covering and had two spars. All wings were equipped with ailerons.

The tail unit was constructed in a braced normal construction. Wood was also used as a material. The covering was made of fabric.

The aircraft had a rigid landing gear with a continuous axle and a tail spur .

The concentration of the masses (engine, pilot, armament and fuel) around the center of gravity resulted in an extremely manoeuvrable aircraft - at least when it flew clockwise with the rotational direction of the rotary engine . Not all pilots could handle it; the pattern was considered very difficult to fly, and losses in training were higher than combat losses.

On July 19, 1918, seven camels loaded with bombs from the first aircraft carrier, HMS Furious, launched an attack on the German airship hangars in Tondern . The airships L 54 and L 60 and their halls were destroyed in the attack. This was the first carrier air strike in history.

The name of the Canadian flying ace Major William George Barker , who scored a total of 52 kills, remains associated with the Camel . He got 44 in the Camel with the serial number B6313, most of them in Italy in the fight against Austria-Hungary. This made the B6313 the most successful single aircraft of the First World War. 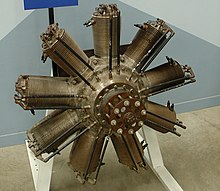 The Sopwith Camel plays a role in the comic series The Peanuts . The dog Snoopy uses his dog house as a Sopwith Camel and denies the First World War aerial combat against the Red Baron .

The Sopwith Camel is mentioned several times in the book Percy Jackson - The Curse of the Titan by Rick Riordan .

The Sopwith Camel was recognized in Microsoft Flight Simulator 3.0 .