The Viking Museum Haithabu was opened in 1985 in Busdorf near Schleswig and is now part of the Schleswig-Holstein State Museums Foundation (see Gottorf Castle ). The museum is located near the historical settlement site and is dedicated to archeology and the Haithabu settlement , which was partly built as an open-air museum.

View of the museum complex; the shape of the building should be reminiscent of upturned ship hulls .

The partly reconstructed long ship Haithabu 1 in the ship hall 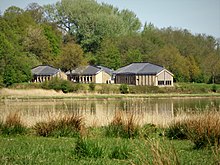 Cast fibula from the 9th or 10th century, exhibited in the museum

2016, life in the Haithabu open-air museum

The Viking Museum Haithabu was opened in 1985 in Busdorf near Schleswig . The museum is dedicated to the archeology and history of the Haithabu settlement . The museum is located near the historic settlement area with ramparts, on which an informative open-air museum was built in 2005 . Archaeological excavations have been carried out in the settlement, on the fortifications and on the burial grounds since 1900 . The port area was investigated between 1979 and 1980 . The museum's permanent collection provides information on the results of the research using these archaeological finds. The most spectacular exhibit is the long ship Haithabu 1 , which was rebuilt in the ship hall and found in the port of Haithabu.

On March 27, 2010, the museum was reopened by Schleswig-Holstein's Prime Minister Peter Harry Carstensen after a six-month renovation, during which the ship hall was redesigned . In 2017 the museum building was closed again for renovations and alterations. The new opening took place in May 2018.

The excavation site in September 2017

During the reconstruction phase, a new excavation was carried out, which was based on the investigations from 1938 and continued.

In the meantime, research into the early medieval trading center has progressed so far that it was decided to rebuild part of the city and the port facility on the original square for the 20th anniversary of the museum. During the preparatory work, virtual 3-D reconstructions were carried out intensively with the computer. Since, in addition to around 12,000 individual finds of wood scraps, entire wattle walls and rafters that had fallen over and sunk in the silt , it was possible to reconstruct the height of the house structures, their roof inclination and the other details.

Seven houses, parts of which were found and excavated, were rebuilt, as well as the typical boardwalks in the shape of the old wooden walkways as well as a pier , a paved stream and a landing bridge . While otherwise only materials and tools from the Viking Age were used for construction, concrete had to be used for the construction of the landing bridge to protect against the shipworm .

Only highly specialized craft firms were commissioned to rebuild the wooden structures. Nevertheless, the work was difficult, as many of the craft techniques common in the early Middle Ages have been lost and are no longer practiced today. Although the saw was known in the Viking Age, the wood was only split with an ax because of its better stability, or used in a relatively natural way, as far as the rafters and the support timber as well as the lath construction for the clay walls.

The reconstructed seven buildings are located about 1.4 km from the museum in the middle of the semicircular wall on the museum open space close to the bank and can be reached via a footpath. Small reconstructed Viking ships lie in the water and dugout canoes on land at the port facility. The buildings are filled with life, especially on weekends, as craftsmen sometimes relive the Viking Age with their families.