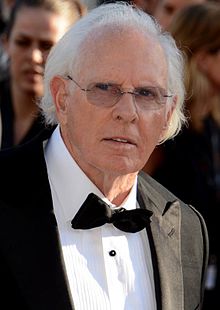 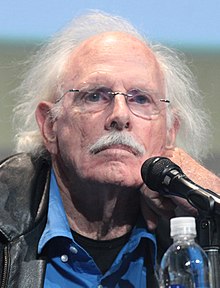 Bruce Dern is of German and Scottish descent. His grandfather George Henry Dern (1872–1936) was the son of German immigrants from Hausen near Gießen ; he was governor of the US state of Utah and between 1933 and 1936 American Secretary of War under Franklin D. Roosevelt . Bruce Dern's godmother was Eleanor Roosevelt .

Dern was married to Marie Dawn Pierce from 1957 to 1959 and to actress Diane Ladd from 1960 to 1969 . The couple's first daughter (* 1960) drowned in a swimming pool at the age of 18 months, while the second ( Laura Dern , * 1967) became a Hollywood star in the 1980s with films such as Blue Velvet , Wild at Heart and Jurassic Park . Dern has been married to Andrea Beckett since 1969. The passionate runner has already completed several ultra-marathons .

Bruce Dern was a television actor from 1960 and regularly played smaller roles in well-known television series such as 77 Sunset Strip or Bonanza until the early 1970s . In 1964 he made his debut as a film actor in two psychological thrillers. In Alfred Hitchcock's Marnie he played a sailor, in Lullaby for a Corpse he played a married lover of Bette Davis whose head is chopped off.

In 1966 he starred alongside Peter Fonda , Nancy Sinatra and his wife Diane Ladd in the hit rocker film The Wild Angels , which sparked a short-lived motorcycle film wave. From 1967 Dern was in demand as a supporting actor in westerns , especially in rogue roles - among others in The Powerful (1967), Wasserloch Nr. 3 (1967), Hang Him Higher (1968) and Even a Sheriff Needs Help (1969) and several times at the side of John Wayne . He was one of the few actors who shot Wayne on screen in The Cowboys (1972). The year before, Dern had his last TV appearance for the time being, as he now concentrated on his now successful film career.

With films such as They Shoot Horses (1969) or Silent Running (1972), the tall actor established with blonde curly hair as a prominent and prolific character actor of the New Hollywood -Kinos. He often played eccentric, psychotic or neurotic characters and was used by well-known New Hollywood directors such as Sydney Pollack , Bob Rafelson and Hal Ashby . Until the mid-1970s, his career was similar to that of Jack Nicholson , with whom he is well known and has also collaborated several times, for example in Drive, He Said (1971) or in The King of Marvin Gardens (1972). But while Nicholson - he considered Dern the best actor of his generation - rose to become a leading Hollywood star, from the 1980s on Dern was rarely able to build on his earlier successes.

In the 1970s, Bruce Dern frequently took on roles in commercial films such as Mass Murder in San Francisco (1973, as a police detective alongside Walter Matthau ), as a terrorist in Schwarzer Sonntag (1977) or again as a police detective in Driver (1978). In 1974 he starred alongside Robert Redford in The Great Gatsby in the role of Tom Buchanan. In addition, critics noted that Dern would have been more suitable as a cast of the internally torn main character than Redford, who was more known as a romantic hero. Bruce Dern played one of his best-known leading roles as a taxi driver (and unsuccessful actor) in Hitchcock's last film, the comedic thriller Family Grave, in 1976 .

In 1978 Dern starred in the anti-Vietnam War film Coming Home alongside Jane Fonda and Jon Voight as the bitter military. For this role he received his first Oscar nomination (the award went to Christopher Walken ). The Great Gatsby and Coming Home also earned the actor Golden Globe nominations. In the psychological thriller Tattoo - Every great love leaves its mark (1981), which failed the criticism, Dern took over the lead role. At the 33rd Berlinale , the actor was awarded the Silver Bear as best actor in 1983 for the film Saison der Sieger .

From the mid-1980s onwards, the character actor, for whom there were hardly any high-profile cinema roles, became quieter. Dern now mostly took on smaller parts in films that received little response from critics and audiences, and from 1985 also worked as a TV actor again.

In 2012, Dern had a brief appearance as a sadistic slave owner in Quentin Tarantino's Django Unchained . The following year he was able to achieve greater success again; for his portrayal of "Woody Grant" in the film Nebraska , he received the award for best actor at the Cannes International Film Festival and a nomination for an Oscar in the same category. He has received numerous international film awards and has been awarded a Golden Globe three times. Even at over 80, he remains true to his acting work. Every year he can be seen in several film or TV productions, twelve films with Bruce Dern were recorded in 2017 alone.

In November 2010 he was honored with a star in the category film (6270 Hollywood Boulevard ) on the Hollywood Walk of Fame .