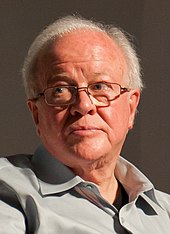 Trumbull is considered a pioneer of modern animation technology and many of his films have become classics. He worked on 2001: A Space Odyssey in 1968 as a special effects supervisor and is responsible for the famous so-called slitscan effect in the latter part of that film. He has received five Oscar nominations for his work on other films and received a lifetime achievement award.

Trumbull was born in 1942 to an engineer father and a painter mother. After dropping out of architecture studies, he applied unsuccessfully to all animation studios until he was hired by an animation company as a painter for backgrounds. Just one year later he headed the background department.

Trumbull was a major contributor to US Air Force and NASA films and worked with science filmmaker Con Peterson . His breakthrough came with the 15-minute animated film To the Moon and Beyond , which IBM showed at the 1964 New York World's Fair .

After 2001 , he turned down an offer to direct the special effects for Star Wars , but put him in touch with his former assistant , John Dykstra , for whom working on the Star Wars franchise was his final breakthrough in the industry. Dykstra later brought Trumbull to Industrial Light & Magic (ILM) to design animation sequences for the first Star Trek film and for Blade Runner . The rotating depiction of the Wildfire laboratory in the film Andromeda is considered the first CGI effect in a film.

In 1972, Trumbull shot the impressive science fiction film Silent Running on a relatively low budget . This film used, among other things, special effects that were developed for "2001" but did not find their way into the film. However, Lautlos im Raum was a flop at the box office and did not find its way into German cinemas. His second film Projekt Brainstorm also flopped.

Trumbull is credited with inventing the Showscan process, which uses 65/70mm film at 60 fps .

Trumbull later focused on developing technology for exhibitions and amusement park rides . In 2002 he held a board seat at IMAX .

In 2010 he was inducted into the Science Fiction Hall of Fame. On February 7, 2022, Trumbull passed away after cancer and a stroke, just weeks before his 80th birthday.