Kirk Douglas (* 9. December 1916 as Issur Danielowitsch Demsky in Amsterdam , New York ; † 5. February 2020 in Beverly Hills , California ) was an American actor and writer . He was a leading Hollywood star in the 1950s and 1960s and was often featured in westerns and adventure films. Mostly he cultivated the image of the tough man with a strong masculine charisma, but also played fragile characters. Douglas was one of the most versatile stars in Hollywood. In his private life he was one of the more liberal representatives of his field. This is often reflected in the choice of his film roles, although he often produced these films himself, such as Paths to Fame (1957) and Spartacus (1960), his most famous role. Douglas saw himself as an outsider in Hollywood, also because of his Russian-Jewish origins, despite all his successes. He was the father of actor Michael Douglas and film producer Joel Douglas .

Kirk Douglas was born as the son of the Jewish emigrants Bryna "Bertha" (nee Sanglel, 1884-1958) and Herschel "Harry" Danielowitsch (approx. 1884-1950) from Tschawussy (today in Mahiljouskaja Woblasz , Belarus ). Since his parents spoke Yiddish , Douglas spoke German well . His parents took the surname “Demsky” from his father's brother, who had previously emigrated and adopted this name in the USA. During his childhood, Kirk lived with his parents and six sisters in a New York poor neighborhood. While his father made his way as a rag picker, Kirk Douglas had to earn a hard living attending school and college. He received a wrestling scholarship and was able to study chemistry and English literature at St. Lawrence University . In 1939 he graduated with a bachelor's degree . In order to be able to pay the study costs, he worked as a caretaker. Only a second scholarship for the American Academy of Dramatic Arts finally brought him to Broadway .

During the Second World War , he served in the United States Navy from 1941 . When he entered the military, he changed his name to Issur Danielowitsch Demsky in "Kirk Douglas". After the war, he returned to the theater on Broadway. 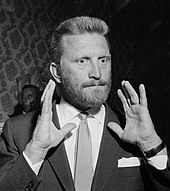 Kirk Douglas 1955; he wore his atypical beard for his title role in the film Vincent van Gogh

One of his former classmates, Betty Joan Perske (later Lauren Bacall ), eight years his junior , recommended Douglas to producer Hal B. Wallis and thus helped him to get his first film role. Kirk Douglas made his film debut in the film The Strange Love of Martha Ivers (1946) at the side of the established actress Barbara Stanwyck . Good reviews helped him to his next big role as Whit Sterling in Golden Poison (1947) and as Noll Turner in the film Fourteen Years of Sing-Sing (1948). In the first years of his career he was seen more often as a film villain before he played mainly heroic roles from the early 1950s. For his role in the film Between Women and Ropes (1949) he received his first Oscar nomination. Over the next five years he played more than twelve leading roles, including in The Man of Her Dreams , 20,000 Leagues Under the Sea and The Voyages of Odysseus .

In 1955 Douglas founded his own film production company, which he named Bryna Productions after his mother . Until 1960 he worked in such well-known films as Paths to Fame (1957), The Vikings (1958) and The Last Train from Gun Hill (1959). The most outstanding portrayal is generally considered to be his title role in Vincente Minnelli's biopic Vincent van Gogh - A Life in Passion (1956), for which he received the New York Film Critics Circle Award and the Golden Globe for best actor; at the Academy Awards he was left behind Yul Brynner ( The King and I ) . Douglas took on another title role in Stanley Kubrick's large-scale production Spartacus (1960), in which he embodied the Roman slave and gladiator of the same name and which he also co-produced . Douglas engaged the screenwriter Dalton Trumbo , who was suspected of communist sympathies and had been blacklisted in Hollywood . In retrospect, the actor described the decision for Trumbo as the most important of his career. Even the film adaptation of the material by the former communist writer Howard Fast had to make him suspicious in conservative circles.

Douglas acquired the rights to the 1962 novel One Flew Over the Cuckoo's Nest, written by Ken Kesey in the early 1960s . In the theatrical version written by Dale Wasserman , which premiered on November 13, 1963 on Broadway in New York, Douglas played the rebellious McMurphy, Gene Wilder was seen in the role of Billy Bibbit. Douglas did not succeed in getting a film studio to film the novel. He eventually left the film rights to his son Michael. He produced the film, which was released in 1975, together with Saul Zaentz ; The co-producer was Fantasy Films , which had a distribution agreement with United Artists . The film received a number of awards, including no less than five Academy Awards : Best Picture, Best Director ( Miloš Forman ), Best Adapted Screenplay, Best Actor ( Jack Nicholson ), Best Actress ( Louise Fletcher ). After It Happened in One Night (1935) by Frank Capra, the film was the second film to  win an Oscar in the five most important categories - the so-called Big Five . The role of McMurphy was taken on by Jack Nicholson in the film because Kirk Douglas was considered too old for the role in the mid-1970s.

Douglas directed twice, first in 1973 in the adventure film Scalawag and two years later in the film Men of the Law . Douglas had his last role in the film Murder at the Empire State Building (2008). In 1988 his autobiography was published under the title The Ragman's Son, which was followed in March 2007 by the sequel called Let's Face It: 90 Years of Living, Loving, and Learning . Douglas also wrote several novels. On February 13, 1991, Douglas survived a helicopter crash; The two passengers died when the helicopter collided with a sports aircraft. In 1995 he suffered a stroke . In the Simpsons episode Who Invented Itchy and Scratchy? Douglas was heard in 1996 as voice actor for the character Chester Lampwick.

At the 2011 Academy Awards , he presented the Best Supporting Actress award to Melissa Leo . At the 2018 Golden Globe Awards , he sat in a wheelchair next to his daughter-in-law Catherine Zeta-Jones as the presenter for the Best Screenplay category .

Douglas last lived in seclusion with his second wife in his home near Los Angeles , California . He died there on February 5, 2020 at the age of 103.

In the German-speaking countries, Douglas was repeatedly dubbed by René Deltgen , Gert Günther Hoffmann and Wolfgang Kieling in the 1950s , until Arnold Marquis was able to establish himself with Spartacus , who with a few exceptions (including several times Heinz Drache ) remained the regular speaker until his death. Although Marquis was one of the busiest German dubbing actors, the identification was so strong that he also dubbed Douglas when another actor appeared who had also been dubbed by Marquis on several occasions (e.g. Robert Mitchum in Der Weg nach Westen ) .

Kirk Douglas star on the Hollywood Walk of Fame

Kirk Douglas was in his acting career three-time Oscar nominee for Best Actor (between women and ropes, The Bad and the Beautiful , Vincent van Gogh - A life of passion ). But he never got it; it was not until 1996 that he received the honorary Oscar for his life's work. Kirk Douglas also received the following awards:

Kirk Douglas is ranked 17th in the list of the "Top 25 Male Film Stars" published by the American Film Institute .

A character from a novel is shown on the cover picture of Perry Rhodan's booklet No. 149, Battle for the Dog Sun World (1964), created by Johnny Bruck . She has the features of Kirk Douglas.

In the Asterix band Obelix on a cruise , one of the main characters, the Greek Spartakis, who is the leader of a group of revolting slaves, is both modeled after the actor Kirk Douglas and an allusion to his role in the film Spartacus .

In 1978 Volume 1 of the comic album series La découverte du monde en bandes dessinées published by the French publisher Larousse was published . For the story about Odysseus contained therein, the draftsman Enric Sió gave the hero the appearance of Kirk Douglas. A Spanish edition was published in 1981 by Editorial Planeta as Volume 2 of the series Grandes héroes - el descubrimiento del mundo .