The title of this article is ambiguous. Further meanings are listed under Spartacus (disambiguation) . 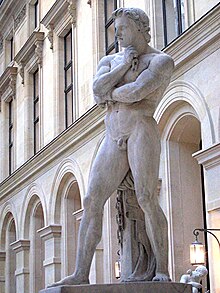 Spartacus , German Spartacus (died 71 BC in the Second Battle of the Silarus ), was a Roman slave and gladiator . He achieved historical importance as the leader of a slave revolt named after him in the Roman Empire of antiquity during the late Roman Republic .

According to the sources of Roman historians , Spartacus came from Thrace , which ultimately remains only a guess. In historical research there are hardly any reliable findings about his early life, the known sources are very vague. Appian describes him as a Thracian who once fought on the side of the Romans, but was then captured and sold as a gladiator in Capua . Plutarch writes that this Thracian had not only a strong body but also a strong spirit, was very educated and intelligent, and suspected that this slave had a cultured parentage. However, “Thracians” can refer to both the Thracian people and a heavily armed gladiator type.

Spartacus escaped after a rebellion with about 70 other gladiators (the numbers vary in the sources) in 73 BC. From the gladiator school of Gnaeus Cornelius Lentulus Batiatus in Capua and was able to collect numerous other slaves, especially from large farms, the latifundia . In addition, he received a considerable influx from the ranks of the impoverished, landless free. As the leader of the rebellious slaves in the third slave war (73-71 BC, also known as the Gladiator War or Spartacus Uprising ), he achieved numerous military successes with his (liberated) slave army against the Roman legions on his march from southern to northern Italy. And this despite the fact that individual departments split off from his army several times and were then destroyed. Other slave leaders of the uprising were Crixus , Gannicus, and Oenomaus .

After breaking out of the gladiator school, the escaped slaves plundered the area around Capua and withdrew to Vesuvius , from where they carried out raids into the surrounding towns and cities. They defeated at the end of 73 BC. BC also two Roman armies, which did not consist of regular soldiers, but of militia troops.

In the spring of 72 BC BC Spartacus began to move with his troops towards Gallia Cisalpina . The Roman Senate sent two Praetorian armies to meet him . They were defeated by Spartacus, who lost his general Crixus. Spartacus moved as far as Mutina (today Modena ), where he defeated another Roman army, around 10,000 men strong.

For an unknown reason, Spartacus did not move further to Gaul , although the way across the Alps would have been free. Instead, he marched with his army in 71 BC. Back to the south.

The Senate had meanwhile given Crassus command of eight legions with the task of destroying the rebel army. Crassus defeated Spartacus in several battles and pushed him further and further into the south of Italy until the rebel army was on the Strait of Messina . Spartacus paid Cilician pirates there to take him and 2,000 of his men to Sicily. However, he was betrayed by the pirates who took his money but then abandoned the rebels.

Spartacus withdrew with his troops to Rhegium and Crassus' troops built several fortifications to starve the rebels . In the meantime, Pompey had returned from Spain and was sent south by the Senate to support Crassus. Even Marcus Lucullus had been called by the Senate to help and ended up with troops from Macedonia in Brindisium . However, both generals no longer intervened in the fight with Spartacus, as he had heard of the approaching legions and decided to break through Crassus' fortifications and face his troops.

In the following battle the rebel army was completely wiped out, Spartacus himself fell. 6,000 rebels were captured and crucified by Crassus along the Via Appia from Rome to Capua. About 5,000 rebels managed to escape after the battle, but on the way north they met the legions of Pompey and were "completely massacred".

Its role in Roman history

Karl Marx called Spartacus a "true representative of the Roman proletariat". In other contexts, too, his name appears again and again as a symbol against oppression and bondage. This history of reception, which is very comprehensive for an ancient slave, is explained by the peculiarities that differentiated the Spartacus uprising from the numerous other armed slave uprisings of his time (sometimes with thousands of participants).

A few sparse references from the ancient authors are helpful: For example, Appian mentions that under Spartacus the booty from the campaigns was evenly distributed to all members of his army; by no means a matter of course for the time (usually the general received the largest part). He also forbade his fellow combatants from owning gold and silver. From this, for example, the Marxist, Russian ancient historian AW Mischulin deduced that Spartacus strived for something like a “ communism of consumption ”. However, his goal was not to establish a new social order in Italy, but to flee home. According to Appian, he is said to have said to his fellow sufferers in the gladiatorial school (mostly Gauls and Thracians): "One must not use life for drama, but for freedom." This project alone called the social order of Rome into question. Because without the work of the slaves it was inconceivable. This also explains the harsh actions taken by the Romans after their victory - although Spartacus for his part had forbidden senseless looting and murder in his army. He also ordered that all goods, such as metals for making weapons, were paid for by his fighters; this should probably ensure the slaves the necessary support in the rural population.

Research always points to the excellent organization of the uprising. This is where it differs from many forerunners. For example, Spartacus took care of the procurement of weapons and other material; In order to guarantee supplies, he insisted on treating the population fairly. Plutarch mentions that Spartacus' wife was a seer who prophesied a great and at the same time dark future for him. This is not surprising, because seers were significantly involved in all of the major slave wars of antiquity.

The sources of Spartacus himself are relatively sparse, as many authors only mention him very briefly in other contexts. Overall, however, more than 30 ancient writers wrote about him - certainly a considerable number for an ancient personality. This illustrates the great importance that was attached to it at the time.

Of the most important authors, Sallust is one of the most important Roman historians at all, but only a few fragments of the Spartacus uprising have survived. Likewise, only fragments of Florus have been handed down (of summarized Livy texts that are no longer available in the original). Plutarch reported on Spartacus in one of his double biographies (about Crassus). Appian wrote about him in his Roman History (1st book on the civil wars).

There is a considerable number of historical publications on Spartacus. Marxist historiography in the Soviet Union and later in the GDR dealt with him particularly intensively . Spartacus served as a prime example of the class warrior in antiquity. However, he was mostly denied an objective that would transcend the system (since the objective conditions, i.e. the development of the productive forces , prevented this). AW Mischulin is an exception.

In the West, Spartacus found particular attention in the context of the so-called "Mainz Slavery Project" initiated by Joseph Vogt . But there are also contributions from other countries, such as Great Britain, France and Italy (Brisson, Guarino, Mitchell and others).

The figure of Spartacus was, among other things, the subject of drafts for dramas by Lessing and Grillparzer in the 18th and 19th centuries . Arthur Koestler's novel The Gladiators , published in 1939, was a parable of a revolutionary society that defends itself against oppressors and sees itself wrongly or understandably forced to organize itself as tyranny. Koestler processed his own experiences with the Stalinist Soviet Union as well as his experiences in the Spanish civil war. Aram Khachaturjan wrote the ballet Spartacus (Scenes from Roman Life) about Spartacus in 1954 .

In a letter to Friedrich Engels on February 27, 1861 , Karl Marx stated that Spartacus was "the most famous guy that all ancient history has to offer", while Pompey was a "pure bastard". This positive view should prevail in the communist movement. In the Russian form Spartak ( Russian Спартак "Spartacus") his name was adopted by numerous sports clubs in communist countries.

In 1933, the Scottish socialist and co-founder of the Aberdeen Soviet in 1917, James Leslie Mitchell , wrote his novel Spartacus. This novel has long been overshadowed by Howard Fast's novel .

Howard Fast's novel Spartacus , published in 1952, portrays Spartacus as a protocommunist fighting the wealthy Roman establishment by freeing the slaves. This novel was filmed in 1960 under the title Spartacus by Stanley Kubrick with Kirk Douglas in the title role. In 2004, directed by Robert Dornhelm, a remake was made based on the same model for television, with Goran Višnjić as Spartacus.

Howard Fast's novel and its film adaptations can only interpret the figure of Spartacus very freely and speculatively, since beyond the marginal data only a few historical facts about the freedom fighter are considered certain. With a view to contemporary society, they serve primarily to glorify Spartacus with a romantic tinge. The crucifixion of Spartacus himself depicted in Kubrick's film is historically incorrect; in fact, he died in battle. The encounter with his later adversary Crassus is also very unlikely.

The 1992 released concept album Jeff Wayne's Musical Version of Spartacus from Jeff Wayne tells how in 1975 already the album Spartacus the German progressive rock band triumvirate , the story of Spartacus. The album had only moderate success.

The main inner belt asteroid (2579) Spartacus was named after him.

During the First World War , Marxist opponents of the war in the SPD formed the Spartacus group under their protagonists Rosa Luxemburg and Karl Liebknecht , from which the Spartacus League emerged in November 1918 . In his name, he cited the slave leader as a symbolic figure for the uprising of the oppressed against their exploiters . On January 1, 1919, during the revolutionary upheavals in Germany, the Communist Party of Germany (KPD) emerged from the Spartakusbund together with other left-wing revolutionary groups .

The January uprising from January 5 to 12, 1919, a general strike initiated by revolutionary trade unionists , the revolutionary stewards with armed struggles against counter-revolutionary tendencies of the incumbent government in the further course of the November revolution in Berlin is sometimes (like the ancient slave uprising) also referred to as the Spartacus uprising , although the Spartakusbund or the newly founded KPD played an involved, but not a triggering or leading role.

In the 1970s and 1980s, the Marxist Student Union Spartakus (MSB Spartakus) was a left-wing socialist student organization close to the DKP , which saw itself in the tradition of the Spartakusbund and also referred to the ancient rebels in its name. The MSB Spartakus was represented in many general student committees (AStA) of German universities .