The Albatros DV was a fighter aircraft from the Albatros Flugzeugwerke . The aircraft was in the First World War by the German air force used.

With the Albatros DV, Ing. Thelen largely followed the concept of the successful Albatros D.III . Compared to it, there were only minor modifications to the DV.

The DV was preceded by the Albatros D.IV prototype at the end of 1916 . From the start, this was not intended as a series prototype, but as a pure test aircraft for the installation of the new, more powerful Mercedes D III engine with 170 hp. The prototype D.IV received wings of the same depth as on the DI and D.II , but already showed the essential modifications to the fuselage and rudder surfaces that were transferred to the DV. The Albatros D.IV was used by the Albatros Flugzeugwerke until at least April 1918 as a test aircraft for various engine types.

The prototype of the DV (factory designation L 22) was probably tested in February or March 1917, and the first 200 cells were ordered in April.

The fuselage, which is typical for Albatros and is aerodynamically built in plywood shell construction, was much more oval shaped on the DV than on the predecessor D.III. The water cooler , mounted centrally in the upper wing of the D.III, was moved to the side in order to protect the pilot from scalding from splashing water in the event of hits in the tank. The upper wing was also moved about 10 cm down, which improved the visibility of the pilot. A high headrest was attached behind the cockpit, but was later omitted because it obstructed the view to the rear. Furthermore, the rudder was more rounded, and the control cables for the ailerons were relocated to the upper wings.

This last change was withdrawn from D.Va (factory designation L 24); the control cables were relocated back to the lower wing. The D.Va also had a reinforced but slightly heavier hull and an even more powerful engine. 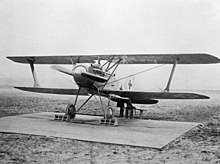 Prototype of the Albatros DX, 1918

In close reference to the DV, two three- decker prototypes were created, the Albatros Dr.I (factory designation L 36) and in 1918 the Dr.II (factory designation L 39), the latter with a Benz engine, as well as the prototypes D.VI , D. VII , D.VIII , D.IX , DX , D.XI , D.XII , D.XIII and D.XIV . None of these machines were ordered by IdFlieg anymore .

Due to the success of the D.III, which had gained air supremacy on the western front in the spring of 1917 , but now had to take on at least equal or even superior enemy fighter aircraft such as the Sopwith Camel , the SE5 or the SPAD S.XIII , the Idflieg ordered a large number of their performance-enhanced successor. Obviously, the order was only preceded by inadequate acceptance tests, which would later take painful revenge.

The DV and D.Va reached the front in July and November 1917, respectively; In November 1917, 500 DV / D.Va were already in use, in May 1918 approx. 1,000. Because of its widespread use, this pattern was flown by many successful fighter pilots, including Manfred von Richthofen , Ernst Udet , Fritz Rumey , Josef Jacobs , Ulrich Neckel , Eduard von Schleich and Julius Buckler .

At the front, however, the aircraft did not meet expectations. Compared to the D.III, the DV showed only a slight improvement in performance, especially since armament with double MG had meanwhile also become standard for allied fighters; after all, it was more motorized and therefore faster than its predecessor. On the other hand, however, it suffered all the more from a dangerous structural weakness: the lower wing had only one main spar, which had already led to wing vibrations on the D.III under high load. The load limit of the stronger DV was exceeded: On February 18, 1918, a pilot of Jagdstaffel 5 broke the lower wing of his DV in a dogfight; he managed to save himself by making an emergency landing. The officer got away with horror; after all, in his DV the aileron control led through the upper wing. The breaking of the lower wing in a dogfight, especially during a dive , almost inevitably had to be fatal with the D.Va.

Albatros made some reinforcements, which, as inspections on front engines showed, were not implemented adequately. So the dive behavior of the machine remained an ongoing risk. Of necessity, the fighter squadrons ("Jastas") at the front finally managed to connect the front wing edge to the wing strut with a small support strut, which significantly reduced the vibration and thus the risk of breakage.

The disappointing experience reports from the front even briefly led to the discussion about discontinuing production in full swing in favor of the tried and tested D.III - for example, the very successful licensed version of the Albatros D.III was produced by Oeffag in Austria-Hungary ( Oeffag D III ) until the end of the war. Changes in the current production would, however, have endangered the growth of the German fighter pilots' associations, which was urgently needed as part of the “ America program ”, and so one relied on the makeshift improvements made by Albatros. The Albatros DV and D.Va became the most popular German fighter aircraft during the war with 900 and 1,012 respectively built; In May 1918, 131 DV and 986 D.Va were still in use, many of which remained in use until the end of the war.

Albatros D.Va at the National Air and Space Museum Washington

Of all the Albatros fighter machines produced, only two copies of the type D.Va still exist: "Stropp", an aircraft with the serial number D.7161 / 17 is exhibited in the National Air and Space Museum in Washington, DC, while the number D.5390 / 17 is part of the collection of the Australian War Memorial in Canberra, Australia.

There are also some airworthy replicas of the Albatros DV, one of which in the markings of Eduard Ritter von Schleich is used for flight demonstrations in the Old Rhinebeck Aerodrome near New York .