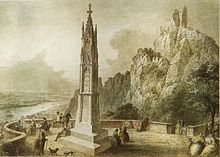 Landsturm monument on the Drachenfels

The Landsturm was in the military since the 15th century "the last contingent" of all conscripts who do not belong to the land army or the navy to ward off an enemy incursion.

The following important information is missing from this article or section:
Landsturm in the coalition wars (see mention in Joseph Glänz and [1] ) - Flominator 11:05, Aug. 18, 2013 (CEST). Addition: The same applies to the land storm during National Socialism. - Merkið ( discussion ) 17:25, 19 Mar. 2016 (CET)
Help Wikipedia by researching and pasting it .

In Prussia, according to the Landsturm Edict of April 21, 1813, the entire defensible male population between the ages of 17 and 60 who were not in the standing army or in the Landwehr was obliged to obey the mobilization of the Landsturm. In a way, it formed the last reserve of the country.

The North German federal law of November 9, 1867 on the obligation to military service and the Reich law on the Landsturm of February 12, 1875 limited this obligation to the period from 17 to 42 years of age.

In the Bavarian Army , the oldest conscripted age groups since the army reform of 1868 were called Landsturm.

In Lübeck , the term Landsturm, in contrast to the usual usage, referred to the Landwehr , a component of the Lübeck Citizens Guard , which represented the military force in the area around the city.

Prussian Landsturm on the Eastern Front, 1915

When the German Reich was founded, the Landsturm consisted of all conscripts between the ages of 17 and 42, provided they did not serve in the army or the navy. The call had to be made by imperial decree.

With the law on changes to conscription of February 11, 1888, there were two mandates: Landsturm I included all men between the ages of 17 and 39, Landsturm II all older people as well as those compulsory military service who had reached the age of 39 Had served in the Landwehr second contingent. Section 24 of the law extended the duty to land storms up to the age of 45. The members of the Landsturm, who had already been trained in the army or navy , were immediately put on active service, while all those who had not been trained were first subjected to a drafting and drafting . Therefore, all men of the respective age groups had to be registered in the local land storm role after the call.

In the event of war, the Landsturm could be used to supplement the army and navy and could also be used outside Germany.

With the mobilization on August 1, 1914, many Landsturm units were set up and mobilized, and more during the First World War .

In the further course of the war, as early as 1915, many conscripts assigned to the Landsturm in peacetime ( Unserved Landsturm ), especially younger generation, came to the front troops to replace personnel.

Austria since the 15th century

In Austria-Hungary , the Landsturm was regulated by the law of June 6, 1886. According to this, all citizens who were fit for military service and not in active military service were subject to the compulsory military attack (19–37 and 38–42 years of age) as well as all retired officers and military officials up to the age of 60. In contrast to regular military service, compulsory military service only occurred in exceptional cases when an enemy incursion threatened or invaded parts of the Reich. The Landsturm received military badges when used against the enemy and thus came under international law protection; like the army, it was formed into units. In cases of extraordinary need, the Landwehr could be supplemented from the Landsturm, but only if all years of the Landwehr and the usable teams of the replacement reserve had already been called up. The recruitment took place according to year class, starting with the youngest. If the Landsturm was not called out, those obliged to do so were not subject to any military control. In Austria the Landsturm Act of June 6, 1886 was only formally valid for the countries represented in the Reichsrat; The Landsturm laws in force in Tyrol and Vorarlberg (see Standschützen ) as well as in Hungary, however, agreed in all essential points with the aforementioned law, as did the implementing ordinances of January 1887.

The sub-authorities of the Landwehr commandos for the Landsturm system were called Landsturmbezirkskommands . The Royal Hungarian Landsturm was called Honvéd and was also an active force. In Bosnia and Herzegovina there was no compulsory land storm.

The Landsturm in Austria existed long before the Landsturm Act of 1886. The Landsturm included all citizens fit for military service. In Tyrol, the Landsturm was traced back to the military rights agreed with Emperor Maximilian I around 1511 , the so-called Landlibell . In the history of Austria, the Landsturm was repeatedly used against Hungarians, French and Turks in times of war over the centuries. In the Breisgau and the Black Forest, the Landsturm, also known as the Landfahne, operated against the Swiss, Swedes and French. The Luttingen pastor Johann Caspar Albrecht , who commanded the Hauensteiner Landfahne from 1688 , became legendary as a military chaplain. From July 14 to 16, 1796, the Freiburg Landsturm defeated the advancing French under Victor Moreau near Herbolzheim . An imperial medal and a plaque on Freiburg's Martinstor from 1798 commemorate the fighting. In 1809 in Tyrol, too, the Landsturm was actually called up. Napoleon had conquered Tyrol and attached it to the Kingdom of Bavaria . After five years of oppression, the abolition of the Tyrolean constitution and forced recruitment for military service under foreign powers, the Tyrolean Standschützen and the Tyrolean Landsturm , under the leadership of Andreas Hofer, rose up against Bavaria in order to reconnect with the Austrian Empire . But even in 1915 when Italy declared war on the Central Powers, it was Tyrolean, Vorarlberg and Salzburg Landsturm units (rifle companies) who held the front until the regular units were ordered from the eastern front to the southern front.

In Switzerland at the beginning of the 20th century, all citizens who were fit for military service between the ages of 17 and 50 were required to take part in a land storm unless they belonged to the exodus or the Landwehr .