Ernst Udet (born April 26, 1896 in Frankfurt am Main ; † November 17, 1941 in Berlin ) was a fighter pilot in the air force of the German Army during the First World War . After Manfred von Richthofen , he achieved the highest number of kills among German fighter pilots. After the First World War he was active in aerobatics and sightseeing flights. During the time of National Socialism , Udet was responsible for the technical equipment of the Air Force in the Reich Aviation Ministryand from 1939 held the post of general air master of the Wehrmacht , most recently with the rank of colonel general .

Ernst Udet's parents were the engineer Adolf Udet and his wife Paula, née Krüger. He grew up in Munich, where he attended the elementary school in Stielerstraße and, from 1906, the Theresien-Gymnasium in Munich .

Udet got enthusiastic about the still young aviation from an early age . In 1909 he became a member of a model aircraft club , and in 1910 he attempted gliding . In addition, he worked in his father's boiler workshop and obtained his one-year certificate in 1913 .

Thanks to his flying skills, he was a star at many air shows of his time. No one except himself managed to pick up a handkerchief from the floor with the wing of his machine. Udet also promoted the career of the German record pilot Elly Beinhorn .

After his rather average performance in school, he volunteered in the military at the beginning of the First World War . After a short period as a motorcycle reporter in the 26th Reserve Division on the Western Front , he financed pilot training at the flight school of the Gustav Otto Flugmaschinenwerke in Munich. In April 1915 he acquired a civil pilot's license, which led to his being transferred to the Army Air Force. From June 1915 he served in the ground company of the Griesheim air replacement unit. In a two-seater, he flew observation flights over the western front until 1916 after completing his field pilot examination . 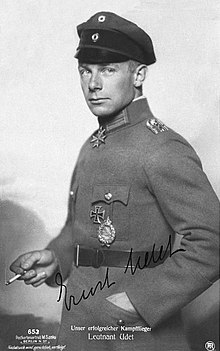 After several risky flight maneuvers and a crash, he suffered a nervous breakdown . In March 1916 he was transferred to the 206 artillery aviation division stationed near Kolmar in Alsace , which was equipped with Fokker E.III fighter planes.

After Richthofen fell, Udet took control of Jasta 4. In August 1918, he shot down 20 enemy planes. He scored his last two aerial victories a month later. Ernst Udet survived the war as first lieutenant and second most successful German fighter pilot; he was able to record a total of 62 kills for himself.

After the First World War, Udet earned his living with sightseeing flights and as a pilot for Rumpler Luftverkehr . In the summer of 1921, despite the restrictions of the Versailles Peace Treaty , he founded Udet Flugzeugbau GmbH with funds from the American financier William Pohl , which he left in 1925. Then he devoted himself more to art and exhibition flights, in which he often performed spectacular flight maneuvers. In 1925 he founded Udet-Werbeflug GmbH and in 1927 Udet Schleppschrift-GmbH. In 1929 Udet worked in the silent films of mountain film director Arnold Fanck The White Hell from Piz Palü and in 1930 in Storms over Mont Blanc as a mountain pilot. He got further film assignments from 1930 to 1932 in Fliehende Schatten , 1932/1933 in SOS Eisberg and 1935 in Wunder des Fliegens . He always played the savior in need who frees other people from dramatic situations through his flying skills.

Udet was able to attend the demonstration of the dive-ready Curtiss Hawk II in the United States in the early 1930s and managed to get the Air Force to finance the purchase of two copies for private use on the condition that they could be studied in detail after delivery. He was so impressed by the effectiveness of the dive bomber concept that he later postponed all bomber projects that were not suitable for dive combat.

In April 1933 he received the appointment of flying commodore of the German Air Sports Association , and on May 1, 1933 Udet joined the NSDAP . At Göring's instigation, Udet joined the newly established Air Force on June 1, 1935 with the rank of colonel . On September 1, 1935, he became inspector of the fighter and dive fighter pilots. As the successor to General Wimmer , he became head of the technical office of the Reich Aviation Ministry . He also organized sightseeing flights, among other things as part of the 1936 Olympic Games . On April 1, 1937, Ernst Udet was appointed major general and on November 1, 1938 promoted to lieutenant general. He is considered the inventor of Jericho Trumpet , a siren that the dive-bombers of the type Junkers Ju 87 gave ( "Stuka") on the steep nosedive a typical intimidating noise. 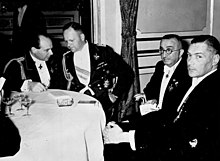 Udet (l.) In conversation with Erhard Milch (2nd from left) and Ernst Heinkel (3rd from left)

Udet is considered to be partly responsible for the misguided German air armament during the first years of the war, which suffered mainly from its enormous inefficiency and the fact that the political objectives and the actual course of the war were completely contrary. On February 1, 1939, Göring gave him the new post of general air master . In this function Udet was subordinate to the State Secretary of the Reich Aviation Ministry and Inspector General of the Air Force Erhard Milch . This expanded the competence of the Technical Office, now headed by Udet, which was not only responsible for the entire aircraft development and production, but also for procurement, supplies and supply. If it was a wrong decision to let Udet head this office, this was all the more true now that Udet had trouble filling the position beforehand. From then on he was subordinate to 26 departments with 4,000 officers, civil servants and engineers who were responsible for everything, but not responsible for anything. The office of general air master meant a further curtailment of competencies for Erhard Milch, who stated with resignation: "Everything turns to dust in Udet's hands."

Udet became the plaything of the particular interests of Messerschmitt , Heinkel and Junkers , who repeatedly succeeded in getting him excited about their projects regardless of the actual benefits and costs, so that Udet did not adequately fulfill his actual task.

On July 19, 1940, after being awarded the Knight's Cross of the Iron Cross , he was promoted to Colonel General. In the last years of his life, Udet consumed an increasing number of luxury and intoxicating substances such as tobacco , alcohol and pervitin . He drew numerous caricatures of his employers and himself with caustic mockery. Among other things, he caricatured himself as an aviator chained to his desk in the Reich Aviation Ministry .

Udet is buried at the end of November 1941 with Hermann Göring (r.) And Adolf Galland to the left of the coffin.

After the failures in the Battle of Britain and the associated hostility from Göring and a few other Nazi figures, Udet shot himself on November 17, 1941 in his apartment in Berlin. On the front wall of his bed he wrote the reproach directed at Göring: “Eiserner, you have left me!” “Eiserner” was Göring's nickname.

Hitler arranged for a state funeral . The suicide was kept secret. The Nazi propaganda let the public know via the press , which was switched to the same level , that he had died of a serious injury while testing a new weapon. For propaganda purposes, the newly established air force training and test area in the district of Warthenau in occupied Poland was named after him Udetfeld .

Udet was buried in the Berlin Invalidenfriedhof . While traveling to the state ceremony, Werner Mölders was killed in a plane crash on the Breslau airfield on November 22, 1941 . He then found his final resting place in the Invalidenfriedhof, opposite Udet's grave. Shortly afterwards, Jagdgeschwader 3 was given the traditional name “Udet”. 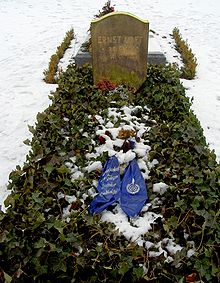 Ernst Udets grave in the Berlin Invalidenfriedhof. Behind the grave of Werner Mölders .

The title character General Harras of the play Des Teufels General is based on Ernst Udet, with whom the author Carl Zuckmayer was friends (they met each other during the First World War). The play was in 1955 with Curd Jürgens in the title role filmed .

In the American film The Great Waldo Pepper ( Reckless Fliers ) starring Robert Redford , the role of the German flying ace "Ernst Kessler" is based on Udet.

Udet described his fight against the French flying ace Georges Guynemer as an example of the chivalry that was sometimes exercised during the First World War . According to Udet's report, Guynemer fought doggedly with the German in June 1917, but, despite his superiority, did not shoot him down when he noticed that Udet had jammed. So Guynemer flew to Udet's plane, tossed him a chivalrous greeting, and then disappeared again over Allied territory.

The interpretation probably also preferred by Udet was that the fighter pilots saw themselves as modern knights of the sky. They did not want to be lacking in fairness and chivalry in the fight with the enemy . According to the pilots' unwritten code of honor , fighting a defenseless enemy was also considered dishonorable. However, there is no description of this incident by Udo's opponent Georges Guynemer. This alleged incident has popularized the stereotype of the chivalry of WWI aviators through later films.

Udet was close friends with the actor Heinz Rühmann , with whom he shared a love for flying. From 1919 until the divorce in 1923 he was married to Eleonore (Lo) Zink. A daughter, actress Dinah Hinz, comes from a liaison with actress Ehmi Bessel . His partner in recent years was Inge Bleyle.

Colonel-General and Admiral General of the Wehrmacht and Waffen-SS