A Squadron SE5a (the serial numbers were removed by the censorship, but the conspicuous markings of Squadron 32 of the RAF were retained) 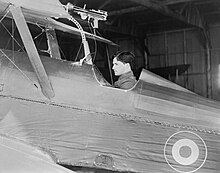 Albert Ball in the cockpit of his SE5

SE5 in the Australian War Memorial

Replica of an SE5a

Replica of an SE5a 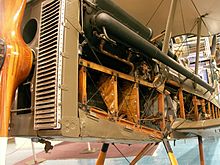 The Royal Aircraft Factory SE5 was a British biplane - fighter plane and arrived in 1917 in the First World War for use.

Under the terms of FE10 and SE5 ( S cout E xperimental 5 was) by Henry P. Folland, J. Kenworthy and Major FW Goodden at the Royal Aircraft Factory in Farnborough two types of aircraft for installation of the new 150  hp (110  kW ) strong Hispano Suiza 8a V8 engine developed. Numerous combat two-seaters such as the BE2 , FE2 and RE8 had already been developed there.

The first prototype flew on November 28, 1916. However, the engine was unreliable and not yet ready for use. The first two prototypes crashed. The test pilot Major FW Goodden was killed on January 28, 1917 when the wings of his SE5 broke off. However, the revised third prototype based on the SE5 turned out to be an exceptionally stable aircraft that withstood extreme dips at top speed, so that the machine could go into production.

The SE5 was one of the first British aircraft to be armed with a synchronized machine gun: the 7.7 mm (.303-inch) Vickers machine gun was mounted on the left side of the fuselage. A 7.7 mm Lewis machine gun was also mounted on a Foster mount above the upper wing, which also made it possible to aim upwards so that enemy aircraft could be attacked from below. So the machine remained ready for action even if the still unreliable synchronization gear failed. The first 25 machines had a semi-closed cockpit glazing, which was later omitted, and a wingspan of 8.53 m, which was later shortened. The cockpit was behind the wings, which made it difficult to see over the long nose, but otherwise the view was good. For attacks on ground targets, Cooper bombs could be placed under the wings.

After 77 SE5s had been built, the more powerful SE5a went into production . which usually received a four-blade propeller. It differed from the SE5 in that it had a longer nose, radiator fins and elongated exhaust pipes. In addition, the pilots often removed the neck rest to improve all-round visibility. From December 1917, the front struts of the V-chassis were reinforced. With the introduction of a 200 hp (147 kW) Hispano-Suiza or Wolseley-Viper engine (engine from Hispano-Suiza with increased compression), the initial engine problems were solved and the speed increased by 45 km / h.

Some machines were converted to training two-seaters , and Curtiss planned to build 1,000 SE5s in the United States , but only the first of these was completed by the end of the war.

The SE5 came from March 1917 to No. 56 Squadron of the Royal Flying Corps  - at a time when German fighter pilots were dominating the air over the trenches in Flanders. The squadron leader Major Bloomfield had the oversized windbreak glazing attached initially removed to reduce the risk of injury in crash landings. On April 7th, the first aircraft was relocated to France and on April 22nd, 1917 the first patrol flight on the Western Front took place over France . The more powerful SE5a was used from June 1917.

Although the pilots were initially skeptical, they soon gained confidence in the stability and good flight characteristics of the SE5, but complained about the insufficient engine performance. Squadrons 40 and 60 also received some SE5. The 56th remained the only squadron that was fully equipped with the 150-hp SE5 - all other SE5 squadrons already received the 200-hp SE5a, including Squadrons 15, 24, 40, 41, 56, 60, 68 and 84. Due to bottlenecks in the delivery of Hispano-Suiza engines with reduction gears - the engines to be supplied by French suppliers were needed at the same time for the French SPAD S.VII and S.XIII - fewer SE5a than Sopwith Camel reached the front, see above that many units had to wait until the beginning of 1918 for their obsolete Airco DH5 and Nieuport 24 to be replaced. As an alternative, the 200 hp Wolseley Viper engine with direct drive was ultimately used, which proved its worth, was finally installed in all SE5a and gave the aircraft its typical look with its angular front radiator.

In 1918, 21 British and two US squadrons were equipped with SE5s. About 38 Austin-made SE5a were adopted by the American Expeditionary Force mostly for the 25th Aero Squadron.

From the summer of 1917 onwards, the Sopwith Camel and the SE5 made a significant contribution to gaining air supremacy for the Allies on the Western Front and maintaining it until the end of the war. Many of the allied flying aces flew the SE5, including Albert Ball , Andrew Beauchamp-Proctor , Billy Bishop , Raymond Collishaw , Cecil Lewis , Edward Mannock and James McCudden .

The SE5 was one of the fastest aircraft of its time and reached 222 km / h - so it was in the range of the SPAD S.XIII . Although it did not achieve the maneuverability of the Spads, Nieuports and Sopwith Camels in combat on corners, it was easier and safer to fly even in the hands of inexperienced pilots and the German Albatros D.III and DV as well as the Pfalz D.III and the Fokker Dr. I think about it. However, their long nose made landing difficult, especially in poor visibility or darkness. When the German Fokker D.VII later proved to be superior to the Sopwith Camel with its excellent high-altitude flight characteristics, the SE5a was still on par. The successful British fighter pilot James McCudden wrote of the SE5a:

"It was very fine to be in a machine that was faster than the Huns, and to know that one could run away just as things got too hot."

"It was very good to be in a machine that was faster than the Huns and to know that you could escape if things got too hot."

The squadron commander of the RFC's 84th Squadron, Sholto Douglas , listed the following characteristics about the aircraft:

SE5b
A prototype converted from an SE5a as a one-and-a-half-decker with a streamlined bow and retractable radiator and a propeller hood. The aircraft was fitted with conventional wings again in January 1919 and was in service until the 1920s.

Eberhart SE5e
Conversion of the SE5a by the American Eberhart Steel Products Company with 180 HP Wright Hispano E engine; 50 aircraft were converted, but only one was completed, which made its maiden flight on August 20, 1918.

After the war, some of the planes cost five pounds.

Four original hulls are in the Science Museum , London, the Royal Air Force Museum in London, the South African National Museum of Military History in Johannesburg / South Africa and the Australian War Memorial in Canberra.

Three detailed replicas named Se.5a-1 were made by The Vintage Aviator Limited in New Zealand and taken over by the Hood Aerodrome in Masterton. Another SE5a was rebuilt in the 1980s by John Tetley and "Bill" Sneesby according to original plans and handed over to the Memorial Flight in La Ferte Alais / France , where it was supplemented with original parts (engine, tank, instruments) and in the colors of the SE5a was painted, the Lt. HJ "Hank" Burdensof had flown in April 1918 with the 56th Squadron.