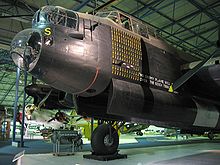 The Royal Air Force Museum is the United Kingdom's air force museum . It is located at Hendon Airport in the North London borough of Barnet . There is also a branch in Cosford , Shropshire .

Around 100 aircraft are on display in five large buildings , along with memorabilia, photos, etc. a.

The machines come not only from their own country, but also from the USA , Germany , France and Japan .

Due to the longstanding exhibition "Battle of Britain", German aircraft from World War II can still be seen:

In the museum in Cosford there is a Fieseler Fi 156 Storch , which was flown in England until 1955 when spare parts problems began to emerge. The Focke-Achgelis Fa 330 can also be seen there . It was one of three of the autogiros that were stored in Farnborough in the 1960s, they came shortly to Hendon and later to Cosford.

In 1912, the country's first flight school was founded on the site . After World War I , Hendon was the location of the popular Hendon Air Show . The museum was opened on November 15, 1972 by Queen Elizabeth II .