The title of this article is ambiguous. Further meanings are listed under Vickers (disambiguation) .

Vickers Limited was a major British engineering and defense company founded in 1828 . In 1927 he merged with Sir WG Armstrong-Whitworth & Co., Ltd. to Vickers-Armstrongs, Ltd. and was nationalized in the 1960s. Parts of the company formed from 1977 to 2003 Vickers plc .

In 1828 the miller Edward Vickers founded the cast steel factory Naylor Vickers and Company with his father-in-law George Naylor in Sheffield . Naylor was then co-owner of the smelter Naylor & Sanderson , while Vickers' brother William, a rolling mill operation. Edward Vickers himself had become wealthy from doing business in the railroad industry . The new plant initially made a name for itself by casting church bells.

Vickers' sons Thomas and Albert joined the company in 1854. In 1863 the company moved to a new location in Sheffield on the River Don in Brightside.

1867, the company was in a corporation converted and received the new designation Vickers, Sons & Company Ltd .

From now on the company opened up numerous new business areas. In 1868 the production of ship shafts was started, from 1872 ship propellers were cast and in 1882 a forging press was put into operation. The first armor plates were made in 1888 and the first guns in 1890 . In 1897 Vickers acquired the Barrow Shipbuilding Company in Barrow-in-Furness , the former Naval Construction Yard , and the weapons manufacturer Maxim Nordenfelt Guns And Ammunitions Company , now called Vickers, Sons & Maxim . From then on, Vickers was able to offer a complete range of products from shipbuilding to armor and naval guns.

In 1901 the Royal Navy's first submarine , the Holland 1 , was launched at the Naval Construction Yard. In 1902, Vickers acquired half of the shares in the major shipyard John Brown & Company in Clydebank . Another business area was opened up in 1905 when the Wolseley Sheep-Shearing Machine Company took over the automotive industry , from which the Wolseley Tool and Motor Car Company emerged . In 1911 control of Whitehead & Company , a torpedo manufacturer, was gained. In the same year, the group took on the name Vickers Limited and entered the aircraft industry. In 1919, the British Westinghouse electrical company was taken over and renamed the Metropolitan-Vickers Electrical Company , or Metrovick for short. In contrast, the car maker Wolseley was sold to the Nuffield Organization in 1926.

In 1928, Vickers-Armstrongs took over Carden-Loyd Tractors Ltd. who had developed the Carden-Loyd Tankette , and thus entered the tank industry .

In 1929, the Metropolitan Cammell Carriage and Wagon (MCCW) was formed by merging the railroad activities of Vickers and Cammell, Laird & Company . According to the then State Secretary of the Reich Chancellery Hermann Pünder , Vickers-Armstrongs donated money to the NSDAP in the early 1930s .

In 1960 the aircraft construction of Vickers, Bristol , English Electric and Hunting Aircraft was combined in the British Aircraft Corporation (BAC). Vickers and English Electric each owned forty percent of the new company and Bristol the rest. BAC, in turn, had a seventy percent stake in Hunting. In 1965, BAC gave up the Vickers brand name. Due to the Aircraft and Shipbuilding Industries Act of 1977, BAC was nationalized and part of British Aerospace , later BAE Systems .

The same act resulted in the spin-off of the Vickers shipbuilding subsidiary and merger with the state-owned British Shipbuilders Corporation . In 1986 this area was privatized again and renamed Vickers Shipbuilding and Engineering Ltd (VSEL), later came into the possession of Marconi Marine, a GEC subsidiary, and is now part of BAE Systems as BAE Systems Submarines .

Steel production was transferred to British Steel . Vickers plc has formed the remaining activities since 1977 .

In 1980 Vickers plc acquired the vehicle manufacturer Rolls-Royce and in 1990 the engine manufacturer Cosworth . In 1998 both companies were sold to Volkswagen .

With the purchase of the Royal Ordnance Factory in Leeds in 1986, Vickers expanded its military division. The Vickers products of that time included the Challenger 1 and Challenger 2 main battle tanks . In 1999 Vickers acquired the South African defense company Reumech , whose subsidiary Land Systems OMC was renamed Vickers OMC . In 2004, Vickers OMC went to BAE Systems .

The engine manufacturer Rolls-Royce , the sister company of the car manufacturer privatized in 1987, acquired the Vickers Group in 1999, but was only interested in the marine equipment division. In 2002, Rolls-Royce sold the armaments division, now renamed Vickers Defense Systems , to Alvis , which gave its new daughter the name Alvis Vickers . Vickers plc was renamed Vinters plc the following year .

In 2004, BAE Systems acquired the Alvis Group and brought Alvis Vickers into its BAE Land Systems military division . With that, the name Vickers finally disappeared after 176 years. 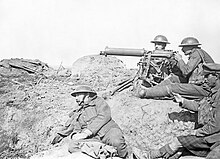 Vickers produced the Maxim machine gun in collaboration with its developer. The company was later taken over and the weapon developed into the Vickers machine gun . This became the standard weapon in the British Empire and the Commonwealth for the next fifty years . The Vickers MG was offered with different calibers and sold worldwide. For installation in aircraft later the air-cooled 7.7-mm MG emerged Vickers K and 40-mm machine gun Vickers S .

Vickers developed a number of well-known types of bombs , including the Upkeep , Highball , Tallboy, and Grand Slam . Later the UB.109T , Vickers Vigilant and Red Dean emerged .

A number of tank designs emerged between the world wars. The British Army procured the Medium Mark I and the Mark II from it . The Vickers 6-ton was the most successful design and was copied abroad under license. The Vickers A1E1 Independent was only built in one copy, but it had a major influence on the tank development of other countries. The Vickers Mark 7 from the 1980s was also only built as a prototype, combining the chassis of a Leopard 2 with a tower similar to that of the Challenger 2 .

Vickers began developing a rigid airship for the British Admiralty in mid-1909 . The prototype was lost on September 23, 1911, shortly after the maiden voyage. The non-rigid airships developed at the same time turned out to be less of a problem. The last aircraft of this type was built for the Japanese government in 1921. Between 1923 and 1935, the subsidiary Airship Guarantee Company Limited existed in Howden (Yorkshire) and developed the six-engine civil airship R100 . The R100 drove for the first time on December 16, 1929 and made several transatlantic voyages until it was scrapped in 1931.

Vickers created the Vickers Ltd Aviation Department in 1911 and built one of the first machine-gun aircraft, the FB5 Gunbus biplane . During the First World War, the company built the Valentia and Viking flying boats and the Vimy heavy bomber . A converted Vimy made the first non-stop flight across the Atlantic in 1919. From this model the Virginia was later developed, one of the most important aircraft of the Royal Air Force in the interwar period.

Before the Second World War, the Wellesley was built and developed into the Wellington bomber . The Valiant , one of the V bombers, came from the Cold War era .

With the converted Vimy bombers, Vickers was one of the first manufacturers of commercial aircraft. This activity continued with the Vickers Viking . The Viscount and Vanguard turboprop aircraft followed later . BAC developed the VC-10 jet aircraft .

Armstrong Whitworth's aircraft manufacturing business was sold to Hawker Aircraft . Vickers (Aviation) Ltd was established in 1928 and was incorporated into Supermarine Aviation Works (Vickers) Ltd after the takeover of Supermarine Aviation Works . In 1938, the successor company Vickers-Armstrongs (Aircraft) Ltd was founded , which retained the old brand names. In 1960 aircraft construction was transferred to British Aircraft. 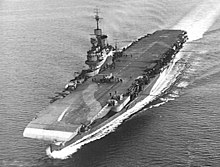 Vickers went into shipbuilding in 1897 by purchasing the Barrow Shipbuilding Company, later the Naval Construction Yard in Barrow-in-Furness , Cumbria . This shipyard was taken over in 1977 by the state-owned British Shipbuilders Corporation , privatized in 1986 as Vickers Shipbuilding and Engineering Ltd (VSEL) and today forms BAE Systems Submarines .

Vickers-Armstrongs was one of the few British manufacturers of marine diesel engines, including for the S-Class submarines of the Royal Navy from 1931 and the T-Class from World War II.