The title of this article is ambiguous. Further meanings are listed under Sheffield (disambiguation) .

Sheffield [ ʃɛfiːld ] is an English town in South Yorkshire , in the region of Yorkshire and the Humber in the United Kingdom . Its name is derived from the River Sheaf , which is formed by the confluence of the Totley Brook and the Old Hay Brook . With 582,506 inhabitants (2018) it is one of the largest cities in England . Sheffield has City status and is a Metropolitan Borough in Metropolitan County South Yorkshire. The metropolitan area of ​​Sheffield has around 1.2 million inhabitants. Sheffield was one of the origins of the Industrial Revolution and a world-renowned center of the steel industry for more than a century . The city was hit hard by the structural change following the decline of heavy industry in the 1970s and 1980s, but has been experiencing a renewed upswing since the turn of the 21st century. Sheffield is also important in the field of music.

The metropolitan area of ​​Sheffield includes the neighboring cities of Rotherham , Doncaster and Barnsley . A hilly mountainous area stretches across the urban area, the highest point of which is 548 m and the lowest point 29  m ASL . Five rivers cross the urban area, the Don , Sheaf , Rivelin, Loxley, and Porter. To the west of the city is the Peak District National Park and the southern foothills of the Pennines Mountains . With over 170 forests and 88 public gardens and parks, it is the greenest city in Europe in relation to the number of inhabitants.

The Sheffield area was populated very early. Traces of Stone Age cave dwellers have been found in nearby Creswell Crags ; tools made of stone, quartz, bone and mammoth ivory. In July 2004 the so-called Church Cave was discovered in the same place , a cave with wall paintings , which is also called the “Sistine Chapel of the Ice Age”. Although comparable, older caves in Spain and France are even more artistically painted, the Church Cave is very remarkable due to its location in the north.

A 150,000 year old hand ax was found 22 km south of Sheffield in 1955 , and a stone circle in the northern suburb of Deepcar . A grave with two urns from the Early Bronze Age was discovered in the suburb of Crookes, and further graves in the suburb of Lodge Moor.

In the 1st century BC A fortress was built near Wincobank (in the northeast of the city). It was built by the Celtic tribe of the brigands , who tried in vain to prevent the expansion of the Romans . A smaller Roman road ran through the northern part of the city, but Sheffield did not develop into a full-fledged settlement, at least not until the time of the Anglo-Saxons .

They founded a settlement on the Sheaf River, which they called Scafield or Escafield . In the south-western suburb of Dore, King Eanred of Northumbria submitted to the West Saxon King Egbert in 829 , whereby Egbert was able to secure the supremacy of Wessex over the areas north of the Humber . Wessex was the only significant kingdom on the island that was not conquered by the Vikings . In the 9th and 10th centuries, however, Sheffield was part of the Scandinavian Danelaw . Many expressions of Scandinavian origin have survived in the local dialect from this period.

In the early 12th century, under the rule of liege William de Lovetot, a church was built that would later become Sheffield Cathedral . He also had a wooden castle built, which was replaced by a stone structure around 1270. This castle was where Mary Queen of Scots was imprisoned from 1570 to 1584 . During the English Civil War , Sheffield was conquered several times by both parties to the conflict and finally fell into the hands of the Republicans under Oliver Cromwell , who destroyed the castle in 1648 . 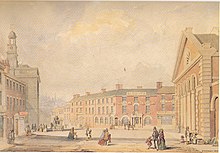 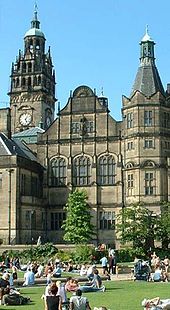 Town Hall with the Peace Gardens

Knives had been made in Sheffield since the 13th century, as one knows from a line in Geoffrey Chaucer's " Canterbury Tales ". From the late 18th century, Sheffield developed into a major industrial city and center of steel processing . Many medieval buildings have been replaced by more modern ones. On March 11, 1864, large parts of the city were flooded after the Dale-Dyke Dam broke ; 800 houses were destroyed and 270 people were killed.

The steel industry was characterized by particularly bad working conditions; It is therefore no coincidence that the country's first trade unions were founded here. Around 1860 there were the so-called Sheffield Outrages , clashes between factory owners and militant trade unionists, which culminated in bomb explosions and assassinations.

The Sheffield steel mills were at the forefront of the advancement of steel, with Harry Brearley inventing stainless steel in 1913 . Sheffield was best known for steel knives. Other important industries were coal mining and quarries. So was z. For example, the Westminster Palace in London was built from limestone from the nearby Sheffield village of Anston. Due to the important war productions in Sheffield, the city was repeatedly a victim of German air raids, as a result of which the old and inner city as well as some industrial plants were badly devastated. Today the stock of old buildings is nowhere near as rich as it was before the Second World War .

In the 1970s many steel mills closed and mass unemployment resulted. Today Sheffield has developed into a service-oriented city. In 2003, a study by Barclays Bank found that Sheffield-Hallam constituency is the wealthiest district in the country outside of south east England.

Sheffield is a major center for pop and rock music . The most famous representatives include The Human League , Pulp , Def Leppard , Joe Cocker , Arctic Monkeys , Malevolence and Bring Me the Horizon . In 1989 the record label Warp Records was founded in the city , which had a great influence on the development of electronica music with its releases . The label's early releases were also referred to as Sheffield Sound by music journalists . The work of the designer collective The Designers Republic, which is still based in Sheffield today, in contrast to Warp Records, can be seen in connection with the work of the label .

The National Center for Pop Music has been in Sheffield since 1999. The museum housed there was not as successful as hoped, so the building was sold to Sheffield Hallam University . Today the University's Students' Union is located in the building. It also serves as a venue for concerts and student events.

Sheffield is the birthplace of actor Sean Bean and Monty Python comedian Michael Palin . The world-famous film All Or Nothing is about Sheffield unemployed stripping.

In 1984 the performance group Forced Entertainment was founded in Sheffield .

Cathedral of St. Peter and Paul

The historic Church of St. Peter and Paul, Anglican since the Reformation , has been the cathedral of the newly founded diocese of Sheffield since 1914 . The Roman Catholic St. Mary's Church , built in 1846 for the congregation that had grown through immigration of Catholic Irish and through conversions , became the episcopal church of the Diocese of Hallam in 1980 .

Sheffield has a long sports tradition. Sheffield FC was founded in 1857 , the world's first football club . Five years later there were 16 clubs. Well-known clubs today are Sheffield United and Sheffield Wednesday (which plays in Hillsborough Stadium ).

The annual World Snooker Championship has traditionally been held in Sheffield at the Crucible Theater since 1977 , with the final always taking place on the first Monday in May, which is a public holiday in England.

Sheffield has one of the best long-distance indoor swimming pools (50 m) in the world. The “Ponds Forge international sports center” has often hosted international, national and regional competitions. In addition to the swimming pool, it is also home to Europe's deepest high diving pool (5.85 m). Many international events have also been held here. Several swimming world records have already been set in Sheffield, among others by Mark Warnecke and Sandra Völker .

Twice (2000 and 2011) World Championships in the short track took place in Sheffield .

The Sheffield Tigers are a well-known team in the British professional speedway league.

The motorway M1 connecting Sheffield with London and Leeds . Since 1994 the city has a tram network again , called Sheffield Supertram .

Sheffield once had two train stations. Sheffield Victoria station on the Manchester – Sheffield – Lincolnshire railway line was demolished. The other station, Sheffield Midland , was retained and is still used extensively today.

A curious thing of operating since 1997 and the airport is Sheffield City Airport. This was closed in May 2008 and gave way to a commercial area with Heliport . In 2005, Robin Hood Airport Doncaster Sheffield, which was previously used by the military, was opened for civil aviation near Sheffield in parallel .

→ Main article: List of famous people from the City of Sheffield