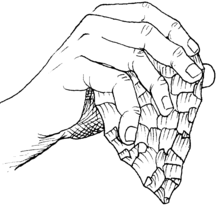 Possible handling of a hand ax

The hand ax is a two-sided stone tool and is therefore also known as a two-sided (French: biface ). Hand axes have a round base, the opposite side is pointed. While they were initially very large (> 20 cm), they became smaller in later periods of time. Processing also became more complex.

Hand axes are the main form of the Acheuleans , which began in Africa about 1.75 million years ago . After the choppers and chopping tools of the Oldowan culture, which are more than two million years old , hand axes are the oldest known tools of the homo genus . As the first manufacturer to concurrently existing in East Africa come Hominini - species Homo habilis and Homo rudolfensis and Homo ergaster and Homo erectus in question. In Eurasia , hand axes were only  detected much later, about 600,000 years ago more frequently - for Homo heidelbergensis . The Neanderthals and the anatomically modern man ( Homo sapiens ), who have been fossilized for about 200,000 years in Africa, also used hand axes until about 40,000 years ago.

For what purpose the hand axes of the Acheuleans in particular - around 1.5 million years in largely the same form - were made, "is uncertain." 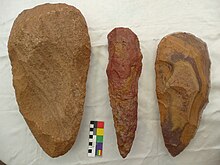 Hand axes are usually oval to pear-shaped. The average length of the hand axes is 100 to 250 millimeters, but there are also much larger examples. The material used was mainly very fine-grained rocks with a high quartz content such as quartzite and volcanite , less often flint and other pebbles such as chert and obsidian . Are extremely rare finds from bone , such as the mammoth - hand ax from Rhede , exhibited in the LWL Museum of Archeology .

There are so-called hand ax industries that have produced concise shapes and processing methods and were used to classify the oldest human cultures: Abbevillians , also called Chelléen (600,000 to 400,000 years ago), Acheuléen (up to 150,000 years ago), Micoquien (130,000 to 70,000 years ago) and Moustérien (120,000 to 40,000 years ago), all named after sites in France. However, it cannot be clearly proven whether these different forms actually hide different archaeological cultures or even different types of people.

Their distribution in Central Europe is an extension of the extremely rich occurrences in Western Europe. The limit of the hand axes of the Acheuléen lies on the Oder . Only late hand ax forms and related devices of the Micoquien, which are slammed on both sides, are also widespread in Eastern Central Europe and Eastern Europe.

Distribution area of ​​the hand axes with the so-called Movius line , which describes an archaeological limit of finds of hand axes

Hand axes were very common. The simplest and oldest forms were found in Africa . The currently most ancient finds of hand axes worked on both sides are assigned to an age of 1.75 million years. There are only very few finds east of the so-called Movius Line , in Southeast Asia and China. This can be explained by a research gap, a lack of raw materials and suitable alternative material such as bamboo.

The oldest European hand axes in the Mediterranean area are documented about 900,000 years ago, north of the Alps, however, earliest about 600,000 years ago ( Boxgrove Quarry site ).

The hand axes of the Acheuléen, which have been attributed to Homo ergaster / Homo erectus for thousands of years, were made for around 1.5 million years in the entire distribution area according to the same pattern. Smaller regional variants can be traced back to the different parent rock, so they are not considered evidence of intentional changes.