from Wikipedia, the free encyclopedia
Acheuleans

Hand axes first appeared in Africa in the Early Stone Age about 1.76 million years ago. They were preceded by the Oldowan's rubble tools as the oldest tools known to man. As a manufacturer of hand-ax cultures coexisting in East Africa come Hominini - species Homo habilis , Homo rudolfensis and Homo ergaster and Homo erectus in question. Hand axes are found throughout Africa and in most regions of Eurasia , where they were only detected much later, about 600,000 years ago.

In addition to hand axes, there are other typical stone tools in the Acheuléen. In Africa, the big chopping knife ( Cleaver ) and discounts , European Acheulean especially scraper and small hand axes, which also hammers are called.

The name is derived from the village of Saint-Acheul in northern France, near which hand axes of this culture have been found. 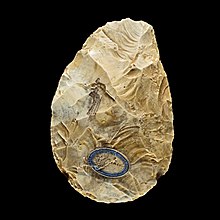 It is named after one of the earliest sites where hand axes were found , Saint-Acheul , a suburb of Amiens . This is where the Saint-Acheul Archaeological Garden is now located . The layers of the find, which are probably around 500,000 years old, were discovered in 1838 by Jacques Boucher de Perthes . Before that, John Frere had already submitted some hand axes from the Hoxne site to the Society of Antiquaries of London in 1797 , but these were not accepted by science. The finds from Boucher de Perthes were initially rejected until Jean Paul Rigollot found other hand axes in the same layers, the age of which was confirmed by the geologist Joseph Prestwich .

Starting in 1869, Gabriel de Mortillet created a classification and nomenclature of the periods of the Paleolithic , including the Acheulean, on the basis of eponymous sites in France . The European Acheuléen (from approx. 600,000 before today) was divided into old and young Acheuléen in 1924 by Hugo Obermaier (limit at approx. 300,000 before today). In 1964, Klaus Günther also introduced Spätacheuléen. Today there is a - chronologically unclear subdivision - into old, middle and young Acheulées.

The end of the Acheulean in particular is unclear, for example in sub-Saharan Africa with the Sangoan . It shows that many inventories of the "Lebenstedter Gruppe" of the Jungacheuléen, introduced by Gerhard Bosinski , can be dated today to the mean Würm Glaciation or Vistula Glaciation (60,000 to 50,000 before today) and the eponymous site of Salzgitter-Lebenstedt in the Micoquia is to be asked. In addition, during the early Glaciation of the Vistula, the boundaries between the Acheuléen and the Moustérien de tradition Acheuléen were vaguely defined (for example, the Ochtmissen site near Lüneburg ). The main characteristic is always the presence of hand axes , combined with a large-format cutting industry with scrapers . Both the evolutionist view of a primitive Acheuléen ( Abbevillien or Protoacheuléen), as well as the juxtaposition of inventories that are free of the wedge as Clactonia , are obsolete today. Although there is a general development trend towards regular and thinner hand axes, these can be found in isolated cases at least 500,000 years ago, for example Boxgrove Quarry , England.

Typical bifacial (that is, worked on both sides) hand ax of the Acheuleans

The geographical distribution of the Acheuléen is due to paleoclimatic and ecological factors, with both the ice ages and the desertification of the Sahara playing a role. Acheulean tools have been found all over the African continent, right up to the rainforest in the Congo . The spread to the north probably took place via Asia Minor and the Arabian Peninsula into what is now Iran and Pakistan to India and beyond. The so-called Movius line , which is said to show the widest geographical spread of the hand ax cultures in Asia, is now considered out of date, as hand axes were also found in Southeast Asia . New finds from southern China (for example the Bose region ) and from the Philippine island of Luzon show the spread of hand axes into eastern Southeast Asia and thus far beyond the Movius line.

In Europe, the introduction of hand axes in the Mediterranean region is documented about 900,000 years ago, north of the Alps, however, earliest about 600,000 years ago (Boxgrove Quarry site).

So-called protofist wedges in Africa are assigned to the level of the Old Acheuléen. The oldest finds, dated to an age of 1.76 million years, come from Kokiselei on the west bank of Lake Turkana in Kenya ; Finds of almost the same age, dated 1.75 million years ago, come from the Konso Formation in southern Ethiopia and - like the finds from Lake Turkana - were associated with Homo erectus .

The oldest finds in northern Alpine Europe come from the Boxgrove Quarry site . The majority of the European Acheuléen finds, however, come from the Holstein warm period and the subsequent cooling phase in the early Saale complex . The majority of the sites in the glaciation area were probably destroyed by solifluction from the subsequent Saale Cold Age (or Alpine Riss Ice Age ).

The hand ax represents the most important turning point in stone tools . For the first time, specialized types were produced for individual activities. Hand axes are often only a small part of the Acheulean deposits. Much more common are tees and devices made from them ( e.g. scrapers ).

In the Middle Acheuléen the find situation is improving. New and better edited devices were found. The hand axes are lance-shaped, the teeing devices numerous. There are scrapers, points, toothed tools and drills. As early as the Middle Acheuleans, some devices were manufactured using the so-called Levallois technique (shield core technique), which are typical of the Middle Paleolithic. The Middle Acheuléen is widespread in Western Europe, there are finds from all over France, England ( Swanscombe skull ) and Belgium.

In South Africa discovered 500,000 year old stone artifacts were in 2012 as projectile points interpreted; If this interpretation is correct, the finds from the site Kathu Pan 1 (KP1) would be the oldest evidence of the use of spears. 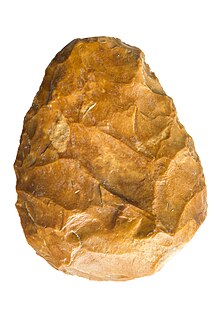 The transition from Homo erectus to Neanderthals occurs in the time of the Jungacheuléen, it begins in the late Riss glaciation and ends at the beginning of the last glaciation . The tools produced continued to improve in quality. There are lance-shaped as well as heart- and almond-shaped hand axes, which are characterized by finely worked out tips and straight side edges. The hand axes, some of which are designed beyond their functionality, are interpreted as signs of aesthetic awareness. The devices processed with Levallois technology often form a subset within the Jungacheuléen inventories. Teeing devices can often hardly be distinguished from the typical Moustérien . There are finds from France, England, Belgium, Portugal and Spain.

The last stage, the Spätacheuléen, was partly in the same period as the following stages of the Micoquien and the Moustérien. Simultaneously with the Acheuleans there are the cultures of the Clactonia and the Tayacia .

The sites of the Acheuléen provide information about the way of life of Homo erectus . Most of the sites are free-range sites. Only later were caves increasingly inhabited. The first traces of the use of fire can be found in the Mindel glacial period . Larger game, for example forest rhinoceros and forest elephants , has already been hunted regularly, as can be seen from the fairly frequent finds of bones together with tools from the Acheuleans. Graves have not survived. Nothing is known about the social organization or religious views of the people of that time.

Stone tools found by an American-Greek research team near Plakias on the southwestern coast of Crete in 2008 and 2009 suggest that early humans were possibly able to reach distant coasts as seafarers as early as 700,000 years ago.