Steinheim an der Murr is a town in the Ludwigsburg district in Baden-Württemberg . It belongs to the Stuttgart region (until 1992 the Middle Neckar region ) and the European metropolitan region of Stuttgart .

Steinheim is the place where Homo steinheimensis was found , which, with an estimated age of around 250,000 years, is the third oldest find from early human history in Europe.

The Murr near Steinheim

Steinheim lies on the lower reaches of the Murr at an altitude of 190 to 392 meters in the northeast of the Ludwigsburg district and has a share in the natural areas of the Neckar Basin and Swabian-Franconian Forest Mountains . The Bottwar flows through the town and flows into the Murr a little west of the town center.

The most important neighboring towns are Großbottwar in the north, Murr (immediately adjacent to the west) and Rielingshausen (district of Marbach am Neckar ) in the east. The Hardtwald also delimits the urban area in the east .

The Steinheim area was already settled in Roman times (90–260 AD), as evidenced by excavations of a Roman bath and several brick kilns. Around 500 AD a local nobility from Steinheim , the Lords of Steinheim , was installed by the Merovingians . This is how a Franconian village came into being. The lords of Steinheim had on today's castle hill , a fortress and waiting , which was built around 800 n. Chr.. It was probably completely destroyed in 1250. Steinheim is first mentioned in the Lorsch Codex , dated September 13, 832. In the 12th century, the Margraves of Baden built a manor on the remains of the Roman bath . In 1254 the knight Berthold von Blankenstein and his wife Elisabeth von Blankenstein (née Elisabeth von Steinheim ) founded the Mariental Monastery and donated it to a. the Steinheim parish church. When Pope Innocent IV approved the founding of the monastery , it is noticeable that on the same date, April 4, 1251, the Pope also approved the marriage of the monastery founders. For this reason, it is believed that the marriage permit was supported by the foundation of the monastery.

The monastery was in the former manor of Baden and became an influential convent of the Dominican Sisters , the u. a. also acquired lands in Esslingen am Neckar and held local rule from 1271. The city name was still "Steinen" at that time.

In the 14th century, Steinheim continued to develop and considerable financial resources had to be raised to build city walls and ditches. In order to make this possible, Emperor Charles IV exempted the Steinheimers from paying taxes until further notice, in order to be able to use the money available to build the buildings.

Emperor Karl IV waives the tax for the citizens of Steinheim so that they can use this money to build city walls and moats, April 21, 1365.

The Mariental monastery was secularized during the Reformation between 1550 and 1560 and burned down completely in 1643; Excavation finds can now be viewed in the Museum of the Monastery and Town History. Before the transition to Württemberg in 1564, the place was occasionally referred to as a city, but the city charter was not formally granted until 1955.

As a result of the administrative reform that came into force on January 1, 1818 , the Kingdom of Württemberg was divided into 64 higher offices . Steinheim was assigned to the Oberamt Marbach .

Towards the end of the 19th century, Steinheim developed into an important location for the Württemberg furniture industry, which today, however, hardly plays a role anymore. Steinheim belonged to the Oberamt Marbach and after its dissolution in 1938 came to the district of Ludwigsburg .

During the administrative reform during the Nazi era in Württemberg , Steinheim came to the Ludwigsburg district in 1938 .

One of the end-of-war crimes occurred on April 17, 1945 in the quarry on the road between Steinheim and Kleinbottwar . The Wehrmacht soldier Erwin Kreetz , who had learned of his wife's death, left the troops, was seized and, on the orders of Major General Kurt von Mühlen , commander of the 559th Volksgrenadier Division, shot in this quarry. A memorial stone has been commemorating this since 1989.

After the Second World War, Steinheim became part of the American zone of occupation and thus belonged to the newly founded state of Württemberg-Baden , which was incorporated into the current state of Baden-Württemberg in 1952.

Population figures according to the respective area. The numbers are census results (¹) or official updates from the Baden-Württemberg State Statistical Office (only main residences ).

Due to its affiliation with Altwürttemberg , Steinheim has been predominantly evangelical since the Reformation. There are three Evangelical Lutheran parishes in Steinheim an der Murr , responsible for Steinheim, Kleinbottwar and Höpfigheim. The parishes belong to the Marbach parish of the Evangelical Regional Church . There is also a Methodist community. After the Second World War, Catholic parishes also formed due to the influx of displaced persons and migrants. In 1954 the Catholic Holy Spirit Church was established. The Holy Spirit Congregation and the San Giuseppe Congregation for Catholics from Italy belong to the Ludwigsburg deanery . There is also a parish office of the New Apostolic Church .

George's Church in the Kleinbottwar district

In the mayoral election on December 14, 2008, Thomas Rosner prevailed against three competitors in the second ballot with 57.90 percent of the valid votes cast.

In the subsequent mayor election on November 6, 2016, Thomas Winterhalter prevailed with 75.2 percent in the first ballot against then mayor Thomas Rosner and two other competitors. 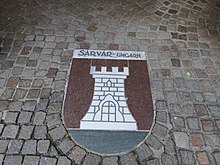 Floor panel of the twin city at the town hall

The blazon of the city's coat of arms reads: "In red under the orb-like golden mark, six silver stones stacked on top of one another (1: 2: 3)."

The coat of arms was featured in the municipal seal before 1558 . The first records of the imperial apple-like patch sign date from 1422. The city flag is red-yellow-white and has been in this color sequence since 1863.

Kleinbottwar and Steinheim were located on the Bottwarbahn , a narrow-gauge line from Marbach am Neckar to Beilstein , which was inaugurated in 1894. The Royal Württemberg State Railways built the station buildings as standard stations of type I or IIa. The route was later extended to Heilbronn-Süd .

In 1966, however, passenger traffic was discontinued and freight traffic was continued until 1989 after being re-tracked between Marbach and Steinheim. Until 2016, the locomotive 99 651 (popularly known as the “duck killer”) at the old station in Steinheim was a reminder of the era of the narrow-gauge railway. However, due to the high restoration costs, it was decided at a municipal council meeting on February 16, 2016 to transfer the locomotive to the Museum Association Öchsle Schmalspurbahn e. V. in Ochsenhausen.

Since the end of rail traffic, the public transport connection in Steinheim has only consisted of bus lines. Line 460 (Marbach – Beilstein) of the Stuttgart Regional Bus runs every half hour. During rush hour there is also line 461, which runs through the Horrenwinkel development area. 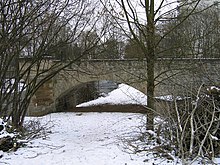 Wikisource: Steinheim  - in the description of the Marbach Oberamt from 1866