from Wikipedia, the free encyclopedia
This is the spotted version , flagged on July 25, 2020 . There is 1 pending change that has yet to be viewed.

This article deals with the community of Tamm in Baden-Württemberg, for other meanings see Tamm (disambiguation) .

Tamm is located 15 km north of the state capital Stuttgart at an altitude of 240 to 310 meters at the northern foot of the Hohenasperg . Neighboring communities are Bietigheim-Bissingen in the north, Freiberg am Neckar in the east, Asperg and Markgröningen in the south and the district town of Ludwigsburg . The economically important Ludwigsburg industrial area Tammerfeld connects Tamm geographically and infrastructurally directly to the district town. The municipal area is 8.78 km².

The village of Tamm and the hamlets of Fißlerhof and Hohenstange as well as the lost town of Brache (Brachheim) belong to Tamm .

Within the towns, a distinction is sometimes made between different residential areas, such as Länderrain , Egelsee and Brächter . A new residential area called Kernäcker Süd I is currently under construction .

Tamm was mentioned in documents in 1287, 1291 and 1293, which the place owes to the nobility in the person of Anselm and Eberhard von Damme. In 1298, Count Eberhard der Scheerer sold his bailiwick rights to the Bebenhausen monastery . From 1300 the place belonged to the imperial city Grüningen , today Markgröningen , in which the local nobility of Tammer resided for a time. In 1322 Tamm came with Grüningen to the Reichssturmfähnrich Konrad II von Schlüsselberg , who in 1336 was given by Count Ulrich III. was replaced by Württemberg . In 1351, Tamm was donated in full to the Counts of Württemberg . In Württemberg , Tamm belonged to the Grüningen office until it was finally dissolved in 1807.

After the defeat of the Protestant troops in the Battle of Nördlingen (1634), Tamm was destroyed by the imperial troops in the course of the subsequent siege of Hohenasperg fortress and remained almost uninhabited for a long time.

Senior official or district membership since the 19th century

History since the 19th century 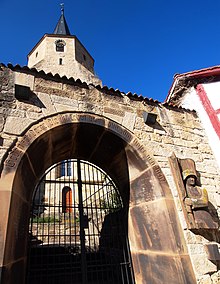 Because of the poor economic situation, at least 200 people emigrated in the 19th century. A gradually increasing prosperity only arose after the railway station on the Württemberg Northern Railway was opened in 1847 by the Württemberg State Railways . In 1906, Tamm joined the electrical power supply and in 1907 got a modern water pipe.

During the Second World War, Allied troops bombed Tamm for the first time on the night of October 12-13, 1941, which destroyed several houses and an agricultural property. Between 1943 and 1944, explosive and incendiary bombs were repeatedly dropped, most of which fell in the open, causing little damage. In April 1945, French soldiers carried out artillery attacks several times over a period of 12 days, in which residents lost their lives and numerous buildings were affected. On the night of the 21st to the 22nd of the same month, French prisoners of war took possession of the town hall for days. The French handed Tamm over to the American occupation forces in July. Since the place became part of the American zone of occupation in 1945 , it belonged to the newly founded state of Württemberg-Baden , which was incorporated into the current state of Baden-Württemberg in 1952.

Due to the admission of several hundred displaced persons, Tamm had a population of 3,905 in 1961. As a result, several new development areas were opened up in the north and east from the 1950s and the housing estate on the Hohenstange from the 1970s. 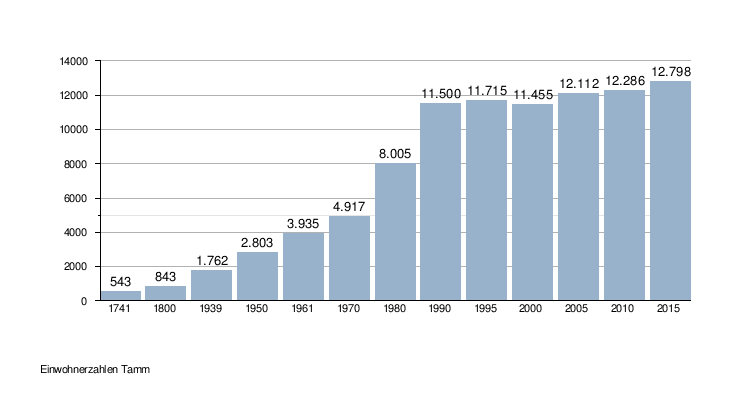 Tamm originally received spiritual care from Markgröningen , but had its own pastoral office since 1331, which until the Reformation belonged to the Land Chapter Grüningen in the Archdeaconate of Trinity of the Diocese of Speyer . With the introduction of the Reformation in Württemberg from 1534, Tamm also became Protestant . Even today, the place is predominantly shaped by Protestantism . Only with the influx of displaced persons after the Second World War did a significant number of Roman Catholic residents return who have had their own parish since 1974. The New Apostolic Church is also represented with two congregations, with divine services in one of the congregations being carried out in Italian. There are also the Jehovah's Witnesses .

A partnership with the Carinthian municipality of Althofen in Austria has existed since 1984 .

Panoramic view of the B 27 towards the Ludwigsburg -Nord entrance , the Tammerfeld industrial area with the Hohenasperg in the background and Tamm Hohenstange (from left to right)

Wine has been grown in Tamm since the late Middle Ages.

The federal motorway 81 can be reached in a short time via the Ludwigsburg-Nord junction (15). The federal road 27 Ludwigsburg - Heilbronn  is connected via the state road 1133 . Landesstraße 1110 connects Tamm with the neighboring towns of Bissingen and Asperg . Markgröningen and Bietigheim-Bissingen can be reached via Kreisstraße  1671 .

The Frankenbahn (Stuttgart– Würzburg ) runs through Tamm . The S5 line (Bietigheim – Stuttgart) of the Stuttgart S-Bahn stops at the station itself every half hour (every quarter of an hour during rush hour) . VVS tickets are valid for local transport .

The Marabu company has been producing drawing equipment and artist paints in Tamm since 1918 . It is one of the world's leading manufacturers of screen printing and pad printing inks. The largest baking factory in Europe is also located in the Laiern industrial area. Every day 200,000 toasted breads, 80,000 packs of wholemeal bread and 50,000 packs of bread rolls are produced here. The company PICO Food GmbH, a marketer of international products in the confectionery, snack and nutrient sector, is also based in Tamm. The Kreissparkasse Ludwigsburg operates a branch in Tamm which is part of the Bietigheim regional office.

The power grid in the city is operated by Netze BW GmbH. Stadtwerke Ludwigsburg-Kornwestheim GmbH operates the gas network . The drinking water is obtained from the Lake Constance water supply . The waste is taken from the Abfallverwertungsgesellschaft the district Ludwigsburg mbH (AVL), a 100% subsidiary of the district Ludwigsburg. AVL is commissioned to carry out the tasks of avoiding, recycling and disposing of waste on behalf of the Ludwigsburg district.

The center of cultural life is the former wine press, built in 1611, which was converted into a community center in 1985. The auditorium has space for around 200 people. In 2007 the new Tammer Bürgersaal was inaugurated, which serves as a new cultural center.

In the immediate vicinity of the wine press in the old town center there are other historical buildings, including the old town hall, the late Gothic St. Bartholomew's Church built around 1450 , a bakery and the historic Ochsen inn .

Newer landmarks of the place are the glass-framed station forecourt with the listed station and the citizens' hall. There are two water towers in the Hohenstange area . The small water tower with a height of 22 m was completed in 1963, the large one with a height of 61 m in 1974. The large tower is primarily necessary to supply the multi-storey residential development on the Hohenstange. The water in the towers comes from Lake Constance. Various cell phone systems are set up on the roofs of the towers.

The Egelsee , a natural city park-like area with gardens and orchards, offers a refuge for hares, hedgehogs and pond newts, which are particularly protected in Germany .

The Rotenackerwald with a structured network of paths is located on the western edge of the district.

Through the Green Neighborhood, founded in 1995 with the municipalities of Tamm, Bietigheim-Bissingen, Freiberg am Neckar, Ingersheim, Ludwigsburg, Remseck am Neckar and Kornwestheim, several projects have been implemented in Tamm. In 1997 a recreational meadow with a viewing hill and barbecue areas was created on an area of ​​around 7500 m². For this purpose, a so-called neighborhood forest was planted on the adjacent area to the east, which consists of different types of trees and shrubs. In 2005 a fruit variety garden was created on around 15 hectares. Rare types of fruit typical of the region were also planted. Editing courses for the public take place there every spring.

The 30 or so local clubs offer a wide range of leisure activities. Sports and tennis facilities as well as the club's own Egelsee sports hall can be used all year round. There are also two sports halls for school operations and a teaching swimming pool.

The largest clubs are VfB Tamm and TV Tamm. The basketball players of VfB Tamm are currently playing in the top league in a basketball community with TSV Bietigheim.

The most successful department of TV Tamm is the karate department. It provides German masters of various ages and disciplines and southern German masters. For several years, the JKA Karate Dojo TV Bushido Tamm has also provided young and successful national fighters of the DJKB German JKA Karate Association (DJKB); In 2012 Raphael Staubach and the German national team of the DJKB became vice European champion in the Kumite team in Prague / Czech Republic. He won all of his fights and was the best German athlete. In 2007, 2010 and 2015 the karate department hosted Germany's and Europe's largest karate training camps (Gasshuku).

The Tamm local group of the Swabian Alb Association was awarded the Eichendorff plaque in 2000.

The Tammer Fleckafescht usually takes place on a July weekend every year. Most of Tamm's associations are represented with a stand. The music stage is located on the Kelterplatz, where many music clubs and bands perform. Not least because of the bands that make music there again and again, the Fleckafescht is also popular and well attended with non-residents .

Personalities who lived or worked in the city

Wikisource: Thamm  - in the description of the Oberamt Ludwigsburg from 1859