Underside of a male 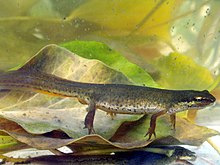 Young a few months after metamorphosis

The pond newt ( Lissotriton vulgaris , syn .: Triturus vulgaris , cf.: Triturus ) belongs to the class of amphibians and the order of the tail amphibians . In Germany it is the most common of up to five species of water newts; it is comparatively rare in Switzerland. The pond newt was proclaimed " Lurch of the year 2010" by the DGHT .

The pond newt is a small tailed amphibian with a body length of no more than eleven centimeters (less in southern Europe). The upper side is smooth-skinned and from yellow-brown to black-gray in color. The males have coarse, rounded, dark spots on it - particularly conspicuous during the mating season. In both sexes, light and dark stripes alternate on the sides of the head (hence the name "striped newch"); There are three longitudinal furrows on the upper side (compare title photo). The ventral side is orange in the middle, becoming lighter on the sides and also provided with dark spots - in the males these are large dots, in the females fine dots.

In their water load , which only develops after the animals arrive in the spawning waters, the males have a high, wavy to jagged (in southern subspecies also smooth-edged), flexible skin crest, which - in contrast to the crested newt - without notches on the tail root from the back of the head runs to the tail end. Their fin hem on the underside of the laterally flattened oar tail shows a bluish tinge. The hind feet show blackish swimming seams in this phase. The cloaca in the males is significantly more bulging and darker in color than that of the females. Overall, these look much more inconspicuous and usually have a slightly lighter, more brownish basic color. For the layman they are difficult to distinguish from those of the thread newt . Among other things, however, in contrast to that of the newt, the throat is usually also dotted. You can also see yellow pad spots under the soles of the feet of thread newts, which the pond newts mostly lack. In the national costume the skin becomes dry, fine-grained and water-repellent; the coloring is now very muted.

Distribution, habitat and way of life

Pond newts are widespread with several subspecies in almost all of Europe as well as in northwestern Western Asia. The only exceptions in Europe are the far north ( Scandinavia north of the Arctic Circle , Iceland ) and the south-west ( Iberian Peninsula , southern France , the Balearic Islands , southern Italy , Corsica , Sardinia , Sicily ). In Germany you can find them almost everywhere, but mainly in the lower elevations and only rarely above 1000  m . In the Austrian Carinthia , however, the species was still found at 2150 meters above sea level.

The pond newt prefers semi-open to open landscapes, but does not completely avoid densely forested mountain regions. In such areas, however, the mountain newt is found much more frequently and, especially in the west, the filamentous newt . In the lower elevations of Central Europe, the pond newt is by far the most common tailed amphibian and, alongside the common toad and the common frog, one of the almost ubiquitous amphibian species. In “toad fence” actions on roads to protect migrating amphibians, hundreds, in extreme cases even several thousand pond newts, are often registered.

Land habitats include , for example, grassland areas with hedges, forest edges, near-natural gardens and parks, abandoned gravel pits and the edges of bodies of water. The pond newt is considered to be a very adaptable amphibian and a follower of culture . It feeds on insects , worms and other small animals during the night ; During the day and in dry phases it hides under stones, leaves or roots. When they are in the water in spring and early summer, it is mainly small crustaceans , but also frog spawn , tadpoles and even eggs and larvae of their own species that are eaten. Smaller, at least temporarily sunny ponds, ponds and ditches are preferred as spawning waters, which are rich in underwater weeds. Thanks to their oar tails, the newts move quickly like fish underwater. They regularly swim to the surface to gasp for air. In the event of danger, they flee to the bottom of the water or between aquatic plants at lightning speed. By July, most of the pond newts had left the water to live on land. However, some remain more or less permanently aquatic (compare: Northern crested newt ). In October or November (Central Europe) the animals retreat to frost-proof terrestrial shelters; some also winter in the water.

In Central Europe, pond newts migrate to their spawning grounds very early after the end of the frost (in the lowlands often as early as February). The main spawning season then extends from late March to May, when the water temperature is at least eight degrees Celsius. In the water, the animals are both diurnal and nocturnal. If a male encounters a female in the water, it begins to sniff this and presents itself with its flank in order to attract their attention. If this succeeds, the male begins to bend his oar tail forwards and vibrate it. With these sometimes whip-like whipping movements, sexual scents are fanned out to the female . In between, the male shows himself from his broadside again to present his back crest and color. If the female responds to the courtship by swimming towards her partner, the male crawls backwards and waves his tail. If the female touches it with the tip of the snout, it deposits a spermatophore on the bottom. Now both move on until the female has reached her cesspool over the seed packet. Thereupon the male stops, stands across and pushes the female back a little with his tail. The spermatophore enters the female's cloaca.

A few days later, the female lays between 100 and 300 individual, brownish eggs with a diameter of 1.3 to 1.8 millimeters, which it attaches to aquatic plants or fallen leaves on the bottom of the water. With the help of the back legs, pockets are folded into the plant leaves and the eggs are literally wrapped. The embryo now takes, depending on water temperature between one and three weeks. The larvae, which are initially six to ten millimeters in size and unable to swim, soon switch to an active swimming phase with fin fringes on the oar tails. Their outer gill tufts remain visible behind the head. They “predatorily” feed on microorganisms, first developing thin front legs and later the rear legs, in order to complete the metamorphosis into land animals after about two to three months with a length of three to four centimeters . After two or three years, they become sexually mature themselves.

However, some animals also stay in the water and retain larval features such as the gill tufts until they grow up and beyond. This phenomenon of neoteny (also called pedomorphism) occurs occasionally in all newt species.

Pond newts and their developmental stages are eaten by many other animals. These include various species of birds (including herons and storks , but also chicken birds ), other amphibians such as the larger crested newts, fish in the water , dragonfly larvae , yellow beetles and other aquatic insects. In addition, there are threats from humans (see below ), so that they only have a short life expectancy of a few years in the wild. However, pond newts are already 28 years old in captivity.

Pond newts in the garden pond

Pond newts often colonize newly created garden ponds within a few years. Pond newts, like the other native newt species, prefer fish-free waters as a breeding habitat and avoid fish ponds. Big fish, e.g. B. Carp fish such as goldfish and koi , but also perch , can prey on newts (see section predators ), but also smaller fish (e.g. sticklebacks ) are food competitors of the newts and can prey on the newt larvae. Furthermore, the presence of rich stocks of submersed aquatic plants (such as. For example, from epidermis , water rating , milfoil , spawning herbs or Wasserpest ) that structure the underwater landscape of the pond, provide hiding places and oviposition used (see Section reproduction and individual development ), of great Meaning. Große (p. 129) names five characteristics that are of particular importance for the suitability of a body of water as a pond newt habitat. An important location factor is the sunny location of the water.

The terrestrial habitat of the newts, which is mostly in the immediate vicinity of the ponds (10–50 meters) and only extends over a maximum of a few hundred meters, should also be strongly structured. Numerous moist hiding places are particularly important here, but also frost-proof hiding places for wintering. Near-natural gardens with hedges, perennial plants, meadow sections, gaps in natural stone walls, open or semi-open piles of leaves or compost are favorable land habitats. Grosse emphasizes the importance of dead wood (tree stumps with loose bark, piles of scrub and brushwood, boards) and other loose ones on the Objects lying on the ground.

Human dangers for newts in the pond, garden and around the house

Basins at ground level (extinguishing and swimming pools) with vertical walls, but also ponds without shallow sections, become death traps for newts and other amphibians because they can no longer leave these bodies of water. Other death traps are light shafts in front of cellar windows, external cellar exits and manhole covers (see amphibian protection ). Steep-walled water basins should be provided with exit aids. Light shafts can be secured by covering them with very fine-meshed wire mesh (available for this purpose in building trade) without the cellar rooms being darkened significantly, and cellar exits should be checked regularly for trapped animals. This is particularly necessary during the amphibian spawning migrations (in warmer areas from mid / late February) and in the summer months when the young migrate to the land habitats. The animals caught in these structures often perish within a few days as a result of dehydration. The introduction of hiding places can provide temporary relief here, but does not replace regular checks.

Distribution of the pond newch

Until a further division of the genus Triturus was made in recent years , the pond newt was also listed in this genus, which comprised up to 15 species. However, the traditional name Triturus vulgaris is still used sometimes.

Within the total distribution area several subspecies are described, which can be very different from the outside (especially in the male species):

A grass snake as a predator of the pond newt

Despite the overall still good stock situation of the pond newch, local losses occur through water destruction or pollution, through artificial fish stocking in small bodies of water, through clearing of hedges and wooded fields, through road traffic (especially during migrations between the sub-habitats), through construction measures and, for example, through Cellar window light shafts and street gullies that act as traps from which the amphibians cannot find their way out again.

The high risk classification in Switzerland is probably to be seen in connection with the phylogeographic location on the edge of the area caused by the Alps .