The title of this article is ambiguous. Further meanings are listed under goldfish (disambiguation) .

Veiltail goldfish spawn. The transparent eggs are fertilized, the milky white one is unfertilized. Each egg pictured is about 0.9 mm in diameter.

Goldfish on an engraving in Bloch's Natural History of Fish, 1786 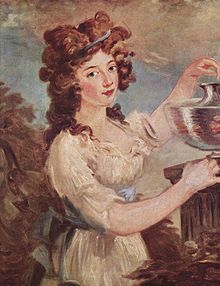 Carl Fredric von Breda , Portrait of a Young Lady with Goldfish , around 1800

The goldfish is a freshwater fish from the carp family (Cyprinidae) and is a domestic animal . Originated about a thousand years ago in eastern China through breeding selection , the goldfish is the oldest known domestic animal, which is kept as a keeping and breeding ground without any direct economic benefit.

Goldfish have a bony skeleton and, depending on the breed form, can reach a total length of up to 35 centimeters. Varieties bred for keeping in aquariums remain around a third smaller. The two-chambered swim bladder serves as a buoyancy mechanism, which is connected to the foregut in the rear part by an air bubble duct , the ductus pneumaticus . Like all carp fish, goldfish do not have a stomach . Goldfish jaws are toothless. However , there are strong fangs in the throat . The food taken in with the mouth that can be pushed forward is crushed between these gullet teeth and a very massive bony chewing plate opposite them, the so-called carp stone. The actual digestion takes place exclusively in the intestines of the fish. As with all members of the Carassius genus , the gills , which are particularly well supplied with blood, are adapted to oxygen-poor water due to their structure and permeability . The goldfish body is - with the exception of the variety group "Oranda", which has an unscaled head growth - completely scaled and equipped with a fully pronounced lateral line . Goldfish eyes have tetrachromatic color vision. That is, they have four different types of cones. In addition to three types of cones, which roughly correspond to those in the human eye, they have an additional UV cone. In addition, goldfish hear in roughly the same frequency range as humans. Sound waves are picked up by the swim bladder and conducted to the inner ear via Weber's apparatus .

Carl von Linné , the founder of binary nomenclature, is the author of the first scientific description of a goldfish. In his Systema naturae he gives it the species name Cyprinus auratus on page 527 . Linnaeus names rivers in China and Japan as their origin, but already refers to the common practice in China of keeping goldfish in ornate ceramic vessels. At that time, goldfish had been domesticated in China for 750 years. Linnaeus had given a domestic animal breed a scientific species name, which is not possible according to international rules for zoological nomenclature. The species name Carassius auratus, which is often quoted for the goldfish, is therefore not available, not even for any other species, and is invalid.

In his "Natural History of Foreign Fish", edited at the end of the 18th century, Marcus Elieser Bloch quotes Linnaeus and lists the goldfish on two plates (93 and 94) as Cyprinus auratus and again, on plate 410, as Cyprinus macrophthalmus . However, he writes about this himself: “I don't dare to decide for myself whether it is a species of its own or is just an accidental modification of the golden carp”. This species name is also not available.

The natural origin of the goldfish has long been disputed. The initial assumption, it originated with the now as neozoon globally extended crucian carp , Carassius carassius (Linnaeus 1758), from is already classic morphometric refuted comparisons. According to the prevailing, morphologically and physiologically founded view, goldfish descend from the gable which is widespread across the Eurasian continent and which Marcus Elieser Bloch first scientifically described as Cyprinus gibelio in 1782 . This freshwater fish species, which is extremely variable in appearance, was later transferred to the genus Carassius Nilsson in 1832. Ichthyologists working cladistically come to a different conclusion when they split up the Eurasian carp fish, which is not based on any phylogenetic consequences. Only comparative studies of the genome of gable and goldfish will provide final clarity.

Within the crucian carp genus, the gable stands out due to its ability to reproduce gyno . The gable spawn does not have to be fertilized by the semen of a male of the same species; the sperm from another carp fish species penetrating the egg is sufficient to initiate the development of the egg. The goldfish are also capable of this imperfect reproduction and it is a fundamental instrument in the reproduction of so-called high breeds (veil-fin breed standards). Ultimately, gynogenesis is also the most important evidence of the goldfish's ancestry.

Traditionally, pets are not given scientific species names. It is customary to add an addition to the genus and species name, which indicates the form of domestication . This is the correct scientific name for the goldfish Carassius gibelio forma auratus (Bloch, 1782).

The goldfish as a neozoon

Goldfish are typical carp fish and, with the exception of the anatomically and organically modified cultivated forms, have all the body characteristics and behaviors of the gable. In other words, they are generalists who can niche themselves in all freshwater biotopes outside the polar zones. Exposed by humans for various reasons, the goldfish is therefore a neozoon that is widespread worldwide and that competes successfully with the original fish fauna. With the exception of Antarctica, goldfish live on all continents and islands and have also developed brackish water areas due to their high salinity tolerance .

Goldfish for sale in an aquarium.

Normal goldfish and all of the varieties derived from them are the most common and traded pets in the world. In addition to the classic fish farming countries in Southeast and East Asia , large breeders in Italy , Florida and Israel also supply the world market. In its country of origin, China, and in Japan , where the breeding of veil-fin breeds began, the cultural significance as a symbol of happiness and fertility has been preserved. In the last century goldfish were important experimental animals in physiological and behavioral research. Some varieties, especially those with selected anomalies on the skull and eyes, are being discussed in Western Europe about what are known as torture breeds , because it is assumed that their expressions of life are partially or significantly restricted.

In Austria the permanent keeping of goldfish (Carassius auratus) and related species in aquariums was prohibited. In the meantime, however, this is again permitted under precisely defined conditions (aquarium size).