This article explains the music group Wings; for other meanings, see Wings (disambiguation) .

The Wings were a musical group led by Paul McCartney with his first wife Linda and Denny Laine . The band is the most successful project of an ex-Beatle and belongs to with twelve top ten singles in Great Britain and 14 top 10 singles (including six number one hits) in the USA as well as eight top 10 albums in Great Britain and eight top 10 albums (including five number one albums) in the US among the most successful groups of the 1970s.

After the Beatles Paul McCartney released his in April 1970 solo album McCartney and in May 1971 along with his wife Linda McCartney album Ram . In August of the same year they founded the group Wings, in which his wife Linda played keyboards , with the American drummer Denny Seiwell, who already worked on the album Ram , and the guitarist Denny Laine (ex- Moody Blues ) . The first album Wild Life was released in December 1971; however, it only reached number 10 in the US and received mostly negative reviews. In 1972 the group, meanwhile strengthened by the Northern Irish guitarist Henry McCullough , brought out three singles. In Give Ireland Back to the Irish (February 1972) McCartney dealt with the Bloody Sunday in Derry , similar to what John Lennon did a little later in his songs Sunday Bloody Sunday and The Luck of the Irish . Give Ireland Back to the Irish came to the index of the BBC and was therefore not play in their radio programs. The same thing happened to the rocking single A-side Hi Hi Hi , published in December 1972, in whose text the BBC's music directors believed they heard calls for drug use and unwanted sexual acts. Their B-side C-Moon , a reggae- style song, was more successful . In the meantime, in May 1972, the nursery rhyme Mary Had a Little Lamb was published.

The group also went on tour. From February 9 to 23, 1972, the Wings gave eleven concerts in British universities, some of them in front of only a small audience; there were 400 listeners in Newcastle and 750 in Birmingham . The first concert took place in the Portland Building of the University of Nottingham without Paul McCartney being specifically announced on the posters. In the same year, the Wings went on a European tour; in 1973 a tour of Great Britain followed.

With the next album Red Rose Speedway , which was released in May 1973, the Wings reached the top position in the US charts for the first time; the extraction My Love was four weeks number 1 in the US. Paul McCartney & Wings were named as interpreters; the record company hoped for better sales figures by naming McCartney.

In the same year Paul McCartney and the Wings achieved their greatest successes to date: The Oscar- nominated single Live and Let Die (June 1973) from the James Bond film of the same name with Roger Moore and the album Band on the Run released in December 1973 , which again topped the charts in Great Britain and the USA, the single Band on the Run became another number one hit in the USA, the title Jet was also successful as a single. Just before the first recordings for Band on the Run , which took place in Lagos , Denny Seiwell and Henry McCullough had left the band. In November 1973 Denny Laine released his first solo album called Ahh .... Laine , but no other member of the Wings played on it.

In the following time after the appearance of Band on the Run , the Wings released the single Junior's Farm (October 1974) and the album McGear (September 1974); it is a solo album by Michael McCartney, the brother of Paul McCartney, who gave himself the stage name Mike McGear and was also a member of the group The Scaffold . The band Wings was meanwhile strengthened with the guitarist Jimmy McCulloch and the drummer Geoff Britton. Geoff Britton was then, after a relatively short time, replaced by Joe English. 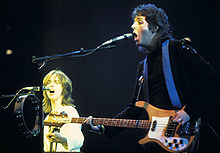 John Lennon gave his opinion on the Wings in an interview published in June 1975: “ … Wings is almost as a conceptual group as a Plastic Ono Band . Plastic Ono was a conceptual group, meaning whoever was playing was the band. And wings keeps changing all the time. It's conceptual. I mean, they're backup men for Paul. It doesn't matter who's playing. You can call them Wings, but it's Paul McCartney music. And it's good stuff…. ”

The albums Venus and Mars (released in May 1975 with the number 1 single Listen to What the Man Said ) and Wings at the Speed ​​of Sound (released in March 1976 with the hits Silly Love Songs and Let 'Em In ) marked together with the world tour, from which the successful live album Wings over America (December 1976) emerged, further commercial successes of the Wings; they played in front of over 60,000 people in Seattle . All three albums reached number one in the US charts. The concert film Rockshow was recorded in June 1976 during the world tour in North America and had its cinema premiere in November 1980.

In the summer of 1976 Paul and Linda McCartney recorded ten Buddy Holly songs with Denny Laine . Paul McCartney already owned the rights to Buddy Holly songs at the time of recording. Denny Laine took over the lead vocals and so the album was released under the name Holly Days as Denny Laine's second solo album in May 1977. The song Seaside Woman was Linda McCartney's first original composition and was first released under the pseudonym Suzy and the Red Stripes with the B-side B-Side to Seaside on May 31, 1977 in the USA and on August 10, 1979 in Great Britain as a single released. In the US, the single came to number 59 on the charts. Jimmy McCulloch and Joe English left the band in 1977 while they were recording their new album (London Town). Jimmy McCulloch died on September 27, 1979 as a result of drug use. The McCartneys and Denny Laine finished the album as a threesome. In November 1977 the single Mull of Kintyre was released , which was McCartney's greatest success in Europe and even replaced the Beatles singles from the top of the lists for the "eternal" bestsellers. This Christmas number one hit was the first single, selling more than two million copies in the UK, and remained the top-selling single until 1984; only in the USA it was unsuccessful. In March 1978, the album London Town was released with the USA number 1 single With a Little Luck . London Town is Paul McCartney's first album to reach the top ten in the German charts; it reached number 2 in the US and number 4 in the UK. 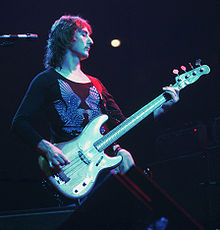 From 1979 up to and including 1984 Paul McCartney was in the USA and Canada with the recording company Columbia Records under contract. Capitol Records was able to release a compilation album by Paul McCartney in December 1978, which was titled with the name Wings Greatest .

With a new line-up (Steve Holley: drums, Laurence Juber : guitar), the Wings released the successful single Goodnight Tonight in March 1979 . The album Back to the Egg , released in June 1979, did not live up to the high expectations on two songs despite numerous prominent guest musicians, and was not commercially successful compared to the previous Wings albums. In December 1979 the Wings went on tour for the last time; there were only concerts in Great Britain. From the concert on December 17, 1979 in Glasgow, the song Coming Up was released as the B-side of the Paul McCartney single Coming Up (studio version) in April 1980. Since in the USA mostly the B-side was played on the radio, Coming Up is the last Wings single and also their last number one hit.

From December 26-29, 1979, Paul McCartney and Kurt Waldheim , Secretary General of the United Nations, hosted four charity concerts for the people of Cambodia at Hammersmith Odeon . As part of this concert series, the Wings gave their last concert on December 29, 1979. Parts of the concerts were released in March 1981 on the double vinyl LP Concert for the People of Kampuchea . A Wings tour through Japan did not materialize in January 1980 because McCartney was arrested on arrival for possession of hashish .

In October 1980 and January 1981, a compilation album with previously unreleased Wings / Paul McCartney songs entitled Cold Cuts was worked on. In January 1981 the final mixing of the album took place, but it was not released.

In February 1981 Steve Holley and Laurence Juber left the wings; only Denny Laine worked on the now new Paul McCartney album Tug of War until March 1981 . George Harrison probably re-recorded the song All Those Years Ago , originally intended for Ringo Starr , in his home studio in March 1981 as a tribute to John Lennon . Harrison changed the lyrics for this and invited Paul and Linda McCartney as well as Denny Laine to contribute the backing vocals. In March / April 1981 the collaboration with Denny Laine was ended, after which on April 27, 1981 the end of the band Wings was officially announced.

The time after the breakup 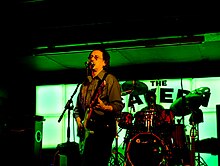 After the group split up, Paul McCartney let the songs of the Wings flow into his repertoire. So the compilation album All the Best! in November 1987 with songs by the Wings under the name Paul McCartney, and from the Paul McCartney world tour in 1989/1990 Wings songs were played live again.

In November 1985, the Paul McCartney single Spies Like Us was released; On the B-side, this contains the previously unpublished Wings title My Carnival , which comes from the recordings for the album Venus and Mars . Another Paul McCartney single ( Put It There ) with unreleased Wings songs came out in February 1990; the 12 "vinyl / CD single features Mama's Little Girl (recorded on Red Rose Speedway ) and Same Time Next Year (recorded May 1978) on the B-side .

On March 23, 1997, Denny Laine, Steve Holley and Laurence Juber played live during a Beatles convention; there was no further musical collaboration between the three former Wings members.

Denny Laine released new recordings of Wings songs in December 1999 on the album Wings at the Sound of Denny Laine . 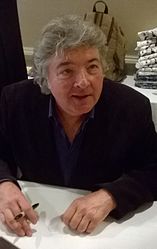 In May 2001 the compilation album Wingspan: Hits and History was released ; Paul McCartney was listed as the interpreter. The selection of songs spanned the period from 1970, beginning with the McCartney album through 1984's Give My Regards to Broad Street album, although the Wings Back to the Egg's last album was released in 1979. Parallel to the release of the double CD, the documentary film of the same name Wingspan was broadcast on television in several countries . The film's director, Alistair Donald, is the then husband of Mary McCartney, who interviewed her father Paul McCartney in the film. The documentary covers the period from the beginning of the relationship between Paul and Linda McCartney and essentially deals with the history of the Wings band up to their breakup.

In December 2007, Paul McCartney and Denny Laine met during a UB40 concert . There has been no further musical collaboration so far (as of June 2014).

Since November 2010, Wings and McCartney albums have been re-released with bonus material. Henry McCullough died on June 14, 2016.

Albums with the participation of the Wings

(1)In the US, the two sides of the single Mull of Kintyre / Girls' School were reversed, so that there was the second song listed in the charts.