Reggae [ ˈɹɛgeɪ, ˈɹɛgeː ] is one of the most important styles of popular music that originally came from Jamaica . It originated there in the late 1960s and spread, beginning in Great Britain , soon internationally, and from 1968 at the latest gradually worldwide. Jamaican reggae music has been an intangible cultural heritage since 2018 .

Reggae emerged in the late 1960s under the influence of American musical styles such as soul , R&B , blues , country and jazz , which were received on the radio in Jamaica, from its immediate forerunners Mento , Ska and Rocksteady . Since then it has developed into one of the most important directions in popular music. The original meaning of the word “reggae” is unclear. Some - including Bob Marley - derive it from the Latin word rex (king) and claim that it means something like "music of the king" (see also Rastafarian ). Others explain it much less majestically as a derivative of streggae , a Jamaican slang word for an easy girl . The first reggae title in which this word occurs was Do the Reggay (1968) by Toots & the Maytals , the first to be considered an actual reggae song is People funny boy (1968) by Lee "Scratch" Perry .

The typical basic rhythm of reggae emerged when US R&B pieces were covered in the first in-house productions of the ska and emphasized the second and fourth parts of the bar. In the transition from Ska to Rocksteady and then to Reggae, this basic minimalist rhythm was slowed down. Reggae and its forerunners emerged primarily as dance music, the spread of which was mainly driven by so-called sound systems , mobile discos. Operators of these sound systems such as Clement "Sir Coxsone" Dodd , Arthur "Duke" Reid or Cecil "Prince Buster" Campbell were among the first producers of independent Jamaican dance music. As the first major and resounding international success - v. a. in the British charts - The Israelites , recorded in 1968 by Desmond Dekker , with number one placements among others. in Germany and Great Britain ; the first real world hit of reggae.

Towards the end of the 1960s, reggae was the preferred music of British skinheads , which is why early British reggae productions are also marketed under the term skinhead reggae and many reggae artists, such as The Charmers , The Corporation , Joe the Boss or Symarip , with titles such as For example, Skinhead Moonstomp or Skinheads A Bash Dem are also aimed specifically at the skinhead community. With the increasing focus on the British pop music market (for example through the use of strings) and, at the latest, with the emphasis on specifically black topics in roots reggae , music lost its importance for parts of the skinhead scene. Early Jamaican and British reggae productions and artists still attached great importance to this scene as the consumer, and although a scene based on the original values ​​of the non-racist skinhead movement still exists today, this scene has largely become uninteresting for the reggae market; not least because of the economic success of the newer varieties. These so-called traditional skins or Trojan skins - named after the record label Trojan Records - still organize traditional reggae events, run small labels and also produce new reggae music with their own bands, which are strongly based on the Hammond sound and the up-tempo of earlier reggae numbers . 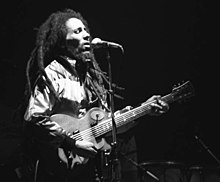 Bob Marley during a concert in the Hallenstadion in Zurich, May 30, 1980

Inspired by the most important reggae musician and Jamaican national hero Bob Marley , numerous musicians linked the music with the Rastafarian religion that already existed at the time, but was not yet widespread. The classic reggae of the 1970s is now often referred to as roots reggae . It emerged from various influences, such as ska and rocksteady or early pop reggae, which initially came mainly from Great Britain. African influences also played a role. At the same time, a form of reggae developed in Great Britain that integrated influences from other forms of music such as punk , new wave or pop and was more secular than the Jamaican style (this includes groups such as The Police , The Clash , The Jam or The Specials ).

In the meantime, many different forms of reggae have developed: Dub is important , an often very minimalist variant, which is characterized by the heavy use of electronic studio effects and almost complete renunciation of vocals. Dube effects are now an integral part of most reggae variants, and Bob Marley's songs have also been influenced by them.

Very early on, dub versions of the songs were included on the B-sides of well-known reggae singles. The Deejays began to provide these "versions" live with spoken chant texts ( toasting ). Toasting comes from scat , a type of jazz song.

Over time, toasting became a new variant of reggae: raggamuffin or ragga. At the same time, another new style of music developed from toasting in New York in the 1970s, hip-hop .

Modern reggae variants such as ragga are often referred to as dancehall reggae. This term is a bit problematic, because strictly speaking it does not designate a specific style, but rather summarizes those styles that are currently popular in Jamaican dancehalls (location of larger dance parties). “Dancehall”, however, also describes a specific, strongly syncopated rhythm in modern reggae.

The application for the intangible world cultural heritage presented by the State of Jamaica was justified by the fact that the music shaped by artists such as Bob Marley played a "key role" in the life of "the entire Jamaican society" and especially in the Rastafarian community . Reggae is a "creative expression of their beliefs, their hopes and goals". The UNESCO -Commission declared on November 29, 2018 Reggae for intangible cultural heritage of humanity. It is now included in the Representative List of the Intangible Cultural Heritage of Humanity . It was recognized as a contribution to international awareness "on issues of injustice, resistance, love and humanity". After the announcement, the state representatives spontaneously danced to Marley's song One Love .

In Jamaican reggae, the singing is mostly in Patois , an English- based Creole language with numerous new word creations (e.g. I and I = we 'we (unit of two people [and with Jah ])', to overstand , neologism instead of to understand ' understand'). The lyrics of roots reggae are often socially critical, draw attention to grievances or want to make Jamaicans aware of their African roots. Another topic that often occurs can be summarized as love, peace & unity (“love, peace and unity”), and the consumption of marijuana is also a popular motif.

The texts of modern dancehall reggae, on the other hand, are - comparable to hip-hop texts - often explicitly sexual and violence-glorifying topics ( slackness ) as well as frequently homophobic texts. As a countermovement, Conscious Reggae established itself , which brings social, political and religious issues to the fore.

Characteristic of reggae is the offbeat phrasing, in which either the guitar or the keyboard, and now and then also the wind instruments, play on the second and fourth beats, which are not emphasized in most other musical genres. In contrast to Ska , where instead of the 2/4 emphasis rather those offbeats are used that emphasize the "and" counting times, Reggae is usually slower and less dominated by wind instruments.

The instrumentation of most (classical) reggae bands consists of a drum set , electric bass , electric guitar , keyboard and vocals . Brass and percussion are often added. In the newer styles of reggae (dancehall, ragga, reggaeton ) electronics in the form of computers and samplers are used more often. The drums are mostly strongly emphasized, synthetically produced and oriented more towards rock and disco sound.

Particularly important in the sound of a reggae song is the bass line, which forms the counterbalance to the offbeats and often describes the actual theme of the piece. Aston Barrett and Robbie Shakespeare are considered to be outstanding reggae bassists .

The drums are mainly characterized by two particular styles:

One drop
The drums emphasize the third bar time with the bass drum, the other bar times are filled by the trickling beat of the hi-hat ; At the beginning of a verse or chorus, the first measure is sometimes emphasized with the kick drum, so to speak, to announce the new verse or chorus. Various short solos (especially in the intro or partly on the fourth measure) occur.
Rockers
The drums emphasize all four cycle times with the kick drum, the third cycle time is emphasized at the same time with the snare drum instead of the trickling hi-hat. Otherwise the same characteristics as in the One Drop . The Rockers style emerged in the mid-1970s and was arguably influenced by emerging popular disco music.

The drums are often assisted by a percussionist. Carlton Barrett and Sly Dunbar are considered to be outstanding drummers .

Guitarists mainly play rhythmic accompaniment in reggae, whereby the emphasis on the offbeat is also in the foreground. Every now and then the bass line is simply doubled. The guitarists can then “let off steam” in sometimes extended solos. These solos also give the music a special touch.

Mainly piano and organ sounds are used, and now and then also synthetic sounds. The keyboard players accompany along with the guitar predominantly rhythmically, of course also with an emphasis on the offbeat. Two variations are very common: on the one hand, the emphasis on the second and fourth beats, and on the other hand, this emphasis is supplemented by the following “and” counting times. Keyboard solos are relatively rare, organ solos are more common. It is not uncommon for larger reggae bands to have two keyboard players.

There are few famous keyboard men (or even keyboard women) in this style of music. But important representatives are Earl "Wya" Lindo, Tyrone Downie , Ian Wynter and Bernard "Touter" Harvey , as well as Jackie Mittoo , one of the most important organ players at Studio One.

Also worth mentioning: Augustus Pablo , made famous for his melodica playing, and Monty Alexander . The latter is actually a jazz musician, but as a born Jamaican he also plays reggae and then combines it with jazz.

The brass section of a classic reggae band usually performs in threes. The instruments played here are usually trombone and trumpet , often also the saxophone .

Since the late 1970s, reggae tracks have been published by German musicians, for example by Spliff (under its own name and as a backing band by Nina Hagen ). The first artist to achieve success with German-language (or Bavarian) reggae was Hans Söllner in the 1980s. Before that, the Aachen group Taugenixe released the first reggae LP in German in 1984 on the Ariwa label. Her album Reggae Ron , which was recorded in the studio of the London producer Mad Professor, received very negative reviews in magazines such as Spex . As a result, the album did not get through to reggae fans in Germany and there was no commercial success.

From the 1990s the number of originally German, partly German-speaking reggae bands and artists grew, and since the turn of the millennium German reggae artists have also achieved chart successes, above all Gentleman , Culcha Candela and Seeed ( Peter Fox and Boundzound also as solo artists), as well z. B. also Jan Delay (Album Searching for the Jan Soul Rebels ).