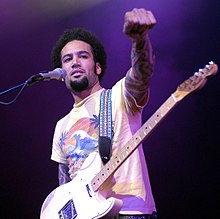 Growing up in the desert, he spent his time skating with friends as a boy . He later worked as a postman and then repaired guitars .

Harper started playing the guitar at the age of six. He was strongly influenced by his mother and grandmother, who both could also play guitar, as well as by his father, a percussionist . This enabled him to develop musically at an early stage. Influences in Harper's music include folk , blues and reggae . He was particularly enthusiastic about Jimi Hendrix and Bob Marley , whom he saw at a concert in July 1978 in Burbank (Los Angeles County) .

At the age of 17, Ben Harper received a bottleneck slide guitar ( Weissenborn ). His earliest appearances were on the LA Circuit with blues numbers. He was discovered in 1993 and signed a record deal with Virgin . His self-produced debut album laid the foundation for his career. Together with his band, the Innocent Criminals , Harper began a long tour through North America and Europe in 1994 , which steadily increased his fame and popularity.

In the following years more albums were released. Harper's musical style changed, and elements of gospel , country , jazz, and funk were incorporated into his music.

Harper also released a duet with Brazilian singer Vanessa da Mata , "Boa Sorte / Good Luck". In the jointly written song, da Mata sings the text in Portuguese, Ben Harper in English. The title was number one in the Brazilian and Portuguese charts and in Brazil in 2008 it was also awarded the prestigious Prêmio Multishow de Música Brasileira prize for "best song". In the same year he also founded the band Relentless7.

Ben Harper played the slide guitar of his colleague Jack Johnson on the video CD “Flake” and worked on his CD “Sing-A-Longs and Lullabies”. In addition, Harper often tours together with his long-time friend.

In February 2010, Ben Harper, Dhani Harrison and Joseph Arthur formed the band Fistful of Mercy . The debut album As I Call You Down was released in October 2010.

On the Nightwatchman album World Wide Rebel Songs from 2011, Ben Harper appears as a guest musician in the song Save the Hammer for the Man . In 2013 he recorded the album Get Up! Together with the blues musician Charlie Musselwhite . on. It was named best blues album at the 2014 Grammy Awards . In the spring of the same year an album with childhood reminiscences was released under the title Childhood Home , which Ben had recorded with his mother Ellen Harper.

Harper was in a relationship with US actress Laura Dern (including Jurassic Park and Die Lust der Schöne Rose ) from 2000 to 2010 and has a daughter (born November 24, 2004) and a son (born August 21, 2001) with her. The couple married in 2005. In October 2010, Harper filed for divorce because of "irreconcilable differences".