Black Afghan is a redirect to this article. For the TV crime thriller see Tatort: ​​Schwarzer Afghane . 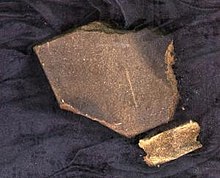 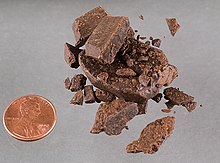 Hashish (from Arabic حشيش, DMG ḥašīš  'grass') describes the resin that is obtained from parts of the female cannabis plant . It is an extract that is often pressed into plates or blocks . Common synonymous names for it are also hash or shit . Individual pieces of the pressed hashish plate are often called "piece" (less often edges or corners) .

Hashish is a brown soft resin that is insoluble in water and burns without leaving any residue on platinum sheet. The resin dissolves in ethanol, ether, chloroform, benzene , gasoline, acetone and ethyl acetate to form a golden yellow color.

In the production of high quality hashish, the inflorescences of the female cannabis plant are mainly used. The reason for this is that, compared to the rest of the plant parts, they contain significantly more resin glands with tetrahydrocannabinol (THC), the main intoxicating component of the plant.

The possession - but not the consumption - of cannabis products such as hashish is prohibited in Austria and Germany if the respective THC limit values ​​are exceeded (for more details, see Legal Aspects of Hemp ). Consumption is also prohibited in Switzerland.

Hash is used both as an intoxicant and as a medicine . With its relaxing effect, it is one of the more "soft" drugs . Hashish is mostly smoked in pipes ( bong ) or as a joint , but it can also be consumed in food.

With the change in the law in Germany on March 10, 2017 with regard to “ cannabis as medicine ”, standardized extracts from the cannabis flower have become part of the therapeutic options and can be covered by health insurance companies.

The cannabinoids make up to 80% of the resin, whereby the content of Δ-9-THC can be up to over 30%. Hashish seized by the police in Europe contained between 4 and 28% THC in 2015. Non-cannabinoid components are flavonoids , spiroindanes , dihydrostilbenes , dihydrophenanthrenes , sterols and alkaloids .

If only the extracted resin from the female plants is used, it is called hashish. However, if the resinous dried flower clusters and leaves close to the flower are used as a whole, the term marijuana is used instead . The parent plants Cannabis sativa or Cannabis indica and their hybrids contain the largest amounts of resin that is obtained from the trichomes (THC-containing glandular hairs) of the flowers and calyxes of female plants.

The most common synonym for hashish in German-speaking countries is “piece”. A piece [ pi: s ] (English piece or part ) was originally a jargon expression for a commercial amount of pressed vegetable resin. The piece is separated from the original panels or bars and sold as such to consumers. In the meantime, the expression has become so independent that the word “piece” (or the actually false “peace”) is often used synonymously with the word hashish, i.e. independent of quantity, production and shape.

In 2003, 60 to 70 percent of the hashish used in Great Britain came from Morocco , where cannabis is mainly grown in the Rif Mountains in the north of the country on an area of ​​around 250,000 hectares. Morocco exports around 3,000 tons of hashish a year. This means that an estimated 200,000 farmers with families - around one million Moroccans - make a living. The rest of the hashish comes from other countries and increasingly from Europe itself.

Afghanistan is not only the world's largest producer of opium , but also the largest producer of hashish revenue, as the United Nations Anti-Drugs and Crime UNODC determined in 2010 . According to the UNODC study, 145 kilograms of cannabis resin or hashish are produced per hectare in Afghanistan. In Morocco, the largest cannabis-growing country in the world, it is only 40 kilograms per hectare in comparison.

Cannabis plants grown under artificial light are richer in THC than the plants from traditional growing areas due to breeding work; they mostly come onto the market as cannabis flowers , marijuana. Hashish is also offered in Dutch coffee shops , both to smoke and to eat in pastries.

Types of hashish and their processing

Medical hash from the USA

Hashish is also available in a wide variety of varieties, colors and textures. It should be noted that the active ingredient content of different varieties, plants and batches can differ considerably, which not only depends on the initial quality (1st, 2nd, 3rd, etc. sieving), but also on any extenders. Hash from traditional growing countries is often mixed with extenders such as rubber, wax, sand, damiana or henna , but also with animal fat, for example. The sale to consumers is not subject to any regulated quality assurance, mainly due to its illegal status.

In German-speaking countries, the active ingredient content of hashish does not differ much from that of cannabis flowers. This is proven by cannabis samples from the Federal Criminal Police Office, which even showed a higher average concentration of active substances in cannabis flowers in 2004. 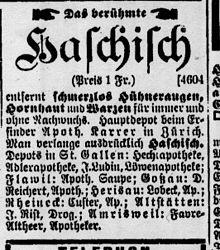 The old traditional varieties from around the 1970s were roughly divided according to growing areas or colors:

The production of hashish in Morocco and Europe is done with sieves of defined mesh size, with the help of which the very fine trichomes (those plant components that contain the most resin and thus THC) are separated from the remaining plant parts. Common sieve devices for hashish making in Europe are handhashmakers, bubble bags (Ice-O-Lators) and pollinators. The resin powder obtained through dry sieving is also called skuff or kief and is usually pressed into hashish. A lightly pressed Skuff product is also called pollen , polm or pollum , but does not contain, as the name might suggest, bee pollen. The hashish obtained through “Bubble Bags” or “Ice-O-Lator” by sieving marijuana in ice water has a particularly high content of active ingredients; however, the yield is significantly lower than with dry sieving.

The hash is heated, crumbled and (often mixed with tobacco or knaster for easier burning ) smoked in a joint, in a small pipe or bong or inhaled with a vaporizer . It will also (in the form of biscuits or cake Engl. : Space cookies or space cakes ) eaten.

Pure hashish is more potent than marijuana with the same raw material. When taken orally, a stronger or longer effect is achieved, which occurs later (about an hour after consumption, after a few seconds to minutes when smoking). Due to the delayed effect, overdose can occur more easily than with inhalation . This can be noticeable , among other things, by a racing heart and panic .

A fatal overdose in humans is impossible, and there is no direct danger to life from the consumption of cannabis.

In literature and film

In his autobiographical work Ecce homo , the philosopher Friedrich Nietzsche refers to hashish consumption in a subordinate clause: “If you want to get away from unbearable pressure, you need hashish. Well, I needed Wagner . "

Wikinews: Hashish  - on the news