The title of this article is ambiguous. Further meanings are listed under Bong (disambiguation) .

A bong is a water pipe that is smoked without a hose. Their countries of origin are Thailand and Indonesia , but also New Guinea and the Philippines , where they are traditionally made from bamboo. 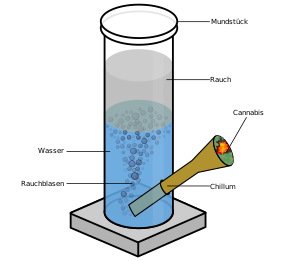 Schematic representation of a bong.

A bong consists of a mostly elongated glass, metal or acrylic cylinder (with a kettle with a bulge at the lower end) that is open at the top and filled a few centimeters with water or other liquids. Not far above the water level there are usually two holes, one to attach the shillum , the other serves as a so-called kick hole (or flash hole ). The shillum is a tube that widens towards the top to form a head (also head or hat ), similar to a pipe bowl, into which the tobacco products (often as a mix , mix , mix , mesh or mixture , sometimes also mash , majé or melange) labeled) is stuffed. The shillum is put into the hole provided for it so that its lower opening is below the water level, the head is now on the outside of the bong. Meanwhile there are also bongs equipped with centrifuges , which are supposed to filter a large part of the pollutants such as tar from the smoke.

The head is originally connected directly to the shillum . But there are also variants in which the head is placed on the coupling or directly on the shillum, in this case also referred to as a downpipe , using a screw or plug-in system . The head itself is usually cylindrical, so that a sieve has to be inserted into the head so that the smoking material does not fall into the water. So-called water heads have a conical shape and become thinner at the connection to the shillum, so that a sieve is no longer required.

The actual smoking process consists of two phases. In the suction phase, the kickhole , if there is one, is closed, the mouth is placed at the top of the cylinder, the head is ignited and then pulled vigorously and for a long time. Due to the negative pressure that is created in the bong, air flows in from the only remaining opening, the shillum . The glowing head becomes even hotter due to the air flowing through it; the smoke is drawn into the cavity by the water . This is how the characteristic bubbling comes about (hence the name bubbling ). When the cavity is completely filled, the next phase comes. The smoker takes another deep breath (through the nose, or you sit down) and then pulls the bong so hard until the head is empty and then opens the kickhole (for bongs without a kickhole, the head is raised instead) around the to draw all smoke into the lungs. Smoking the entire head in one go without putting it down is called "hit" or "shoot through". The smoking process has many different names among users. Common names for the smoking process are: smoking a head, hat or head, steaming, hitting, puffing or kicking .

Commercially available glass bongs are usually made of borosilicate glass and, similar to laboratory accessories, have standardized cut sizes for the use of a chillum, a pre-cooler or simply a bong bowl. These cuts mostly have a size of 14.5 mm or (especially with larger water pipes) of 18.8 mm. The usual smoke capacities are 250 ml, 500 ml and 1000 ml. However, the water volume of the pipes is generally much lower, since glass bongs are never completely filled with water. Glass bongs have the advantage that they hardly absorb cold smoke when cleaned regularly, and are therefore particularly durable (apart from the risk of glass breakage).

A Holland bong is a very simple variant made of ceramic, rarely also made of glass . This form of the smoking device resembles a vase of flowers , mainly due to its often brightly colored blue or red . The bottom of the bong is round and measures approx. 15 cm in diameter. Up to about 2/3 of the height, this circumference is halved in order to become a little wider again towards the mouth end piece. Very often the shillum of these very simple and inexpensive bongs consists of a piece of aquarium hose onto which a wooden head is attached. There is usually no separate kickhole.

For Holland bongs, a simple aluchillum is usually used, in contrast to glass bongs with cut systems, which also use z. B. Allow diffusers. 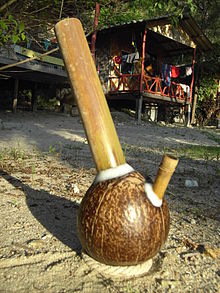 Bong made of bamboo and coconut

In Asia, bongs consisting only of bamboo or with a coconut as a cavity are very common, as the raw material grows everywhere and a usable bong can be made with a knife and a saw. Putty or wax is used for sealing. There is no kickhole.

Bongs made of acrylic are very inexpensive to manufacture and sell, but still have a long life expectancy due to the stable material. There are many different versions that differ in color, shape, size and imprint. The structure is similar to that of a glass bong, but there is no coupling through which the shillum is held, only a small raised hole with a sealing ring on the tube through which the shillum is inserted. Here is the kickhole.

A metal bong is a bong made of stainless steel or aluminum. While the body and shillum are always made of metal, there are also variants in which the foot and mouthpiece are made of a different material, e.g. B. made of rubber or acrylic. It is characterized by an extremely long life expectancy and a pleasant cooling of the smoke through the metal. In terms of functionality, metal bongs differ little from glass bongs, only the shillum is fastened with a seal similar to an acrylic bong. The metal promotes the extremely fast deposition of dirt on the inner walls and the development of an unpleasant smell of the bong, which makes regular cleaning indispensable.

An ice bong ( also known as ice bong ) is a bong made mostly of glass. The specialty of this bong is that there is a constriction below the mouthpiece (ice twist) so that ice cubes can be filled. The aim is to cool the smoke so far on the way up that it is less scratchy when inhaled. This effect can be increased even further with the additional use of a pre-cooler.

A pre-cooler is used for additional smoke cooling in a water pipe. To do this, the pre-cooler is connected to the bong with a coupling and then filled with water. So the smoke goes through two water baths, which makes it less scratchy and cools down more. In addition, a lot of impurities get stuck in the pre-cooler and do not get into the pipe, which reduces the cleaning effort.

A variation is the diffuse shillum, which has several small exits on the side of the area in the water. This distributes the smoke into smaller air bubbles, which means it is filtered more strongly and tastes much milder.

A catalyst is a glass body that is inserted between the shillum and the head and filters out the combustion residues that arise when smoking.

A large number of synonyms are common for bongs. Some examples are: Blubber, Flasch, Pief, Öck or Rohr . Often pipes are given names that are associated with the use and smoking behavior of the bong as well as the resulting intoxication experiences. However, the names are usually very individual and therefore cannot be incorporated into a clear pattern.