The following important information is missing from this article or section:
Information on the Chinese culture, history, forms of production, forms of use
Help Wikipedia by researching and pasting it . 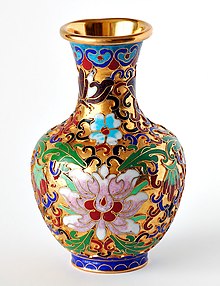 A vase (of lat. Vas, vasis vessel dishes ) is usually made of glass , ceramic or metal existing in principle but producible from any suitable material hollow vessel , the setting up of cut flowers also serves only or for decoration. Traditional vase shapes are bulbous and typically have a narrow neck. Older vases often have two opposite handles on the side (e.g. metal altar vases). Vases play a special role in the history of art in ancient Greece because the often painted vessels are the most important source of painting for us today. Ornamental vases were used in architecture , interior design and garden art as a sculptural decoration .

A cultural history of the vase has to distinguish between form (type, shape) and function (potpourri, flower vessel, decorative element) more clearly than with other types of objects.

About medieval vases we know almost exclusively more concrete facts from panel painting. In depictions of the Mother of God, especially in the scenes of the Annunciation , (glass) vessels with, for example, a lily blossom are shown as symbolic attributes of the purity of Mary. In the Renaissance the motif also appears in profane space. The flower still lifes of the Baroque period present lavish bouquets in vases, the shape of which is partly derived from ancient models, and partly shows the forms of use of cups and jugs. During this time, sets of vases made of porcelain and faience appear as domestic decorative objects in Holland and Northern Germany, which are placed in groups of three or five on top of the ledges of cupboards. The potpourri vase is a fashion of the 18th century . The vase shape, derived from antiquity, is extremely widespread in classicism, there mostly as an ornamental decorative motif, not so much as a real flower vessel. This has become more common since the Biedermeier period, and towards the end of the century it increased to lush arrangements that could often be composed of artificial flowers (so-called Makart bouquets ). Vases from the Art Nouveau period around 1900 are often decorated with flowers and floral ornaments themselves, but the typical flower vessel of these decades is the jardinière . With the new heyday of art pottery in the 20th century, the vase also gained a new status as an object of autonomous handicrafts independent of intended use. The play of colors and shapes of the glaze takes the place of naturalistic representations, a development that continues to have an impact on today's mass production. 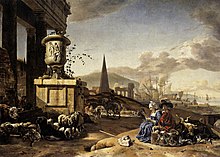 Ornamental vase as a central design element in the painting An Italian Seaport by Jan Weenix , around 1666

In the architecture of the baroque and classicism , vase shapes derived from antiquity were used to design buildings and gardens. As building sculptures carved in stone, often in marble, but also in bronze, cast metal, gilded lead, in iron, stucco and terracotta, they served as the crowning finish of magnificent facades, portals, memorials, balustrades and mantels as well as for the design of lines of sight , Terraces and parterres in French garden architecture . The French gardening theorist Antoine-Joseph Dezallier d'Argenville was one of the protagonists of the garden beautification with vases . The painting of the baroque and classicism also took up stone vases as architectural design elements.

Vases as trench work in the First World War

Vases were liked by soldiers in the months of position and grave battles of the First World War as a grave work , from faded ammunition shells produced in memory of family members in the home.