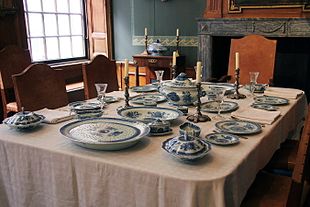 Set dining table for five, based on the lifestyle of a middle-class Frisian family around 1900

Eating utensils (also just dishes ) is the collective name for everyday objects that are used when taking meals, especially plates , cups , drinking glasses and bowls . The cutlery does not fall under the generic term crockery .

Eating utensils can be made of different materials, today mainly porcelain , stoneware , earthenware , plastic , wood and glass are common. Among primitive peoples, ivory and horn, meshes made of reeds, palm leaves, etc., as well as halved large nutshells (e.g. coconut ) or eggs from large birds are also used. In the industrialized countries, these materials for tableware are rather exotic. In addition, today z. For example, disposable tableware made of cardboard, aluminum, plastic or foamed plastic is also used for consumption on the go , sometimes made of edible (e.g. waffles ) or compostable, natural materials such as wood or leaves.

Drinking vessels, jugs and bowls were used in the early days of mankind. In contrast, plates in their current form with a recess in the middle have only been used in Europe since the 16th century, initially only in aristocratic courts. The nobility , too , previously used flat wooden dining boards or pewter plates as a base for dishes . From the writings of Erasmus of Rotterdam it emerges that even in noble houses, two eaters usually shared a plate and a drinking vessel.

The drinking cups were mostly made of metal until modern times. Towards the end of the Middle Ages, the upscale tableware consisted of serving platters made of pewter or silver, small dining boards, spice containers and drinking cups. The common people often did not have any dining boards either, but used slices of bread as a place to eat or ate straight from the saucepan or a shared bowl. Nowadays, dishes made from sugar cane and palm leaf are also widespread and can also be used as usual in everyday life, as they are both oven and microwave safe.

Tea set by the Meissen Porcelain Manufactory , shaped around 1900

The hot drinks tea , coffee and chocolate , which were new in Europe at the time , made the introduction of other drinking vessels necessary, because the previously common metal vessels turned out to be unsuitable. On the one hand, they adulterated the taste, and on the other hand, the heat conduction could easily burn your mouth and fingers. Therefore, drinking bowls made of porcelain were imported from the noble houses of China , as they were already used there. They had no handles and were also called koppchen . Since you could burn your fingers on them, cups with handles appeared in Europe , with different shapes for tea, coffee and chocolate being developed over time. In 1708, Germany's first own manufacturing facility was set up in Meissen , so that the company became independent from China.

As early as the 18th century, saucers were added to the cups , which were not just " saucers ", because at that time it was common in all shifts to drink hot coffee from the saucer so that it cooled down more quickly. Around the same time as the cups came the coffee pots , which were initially mostly made of metal, silver , tin and brass , and in the country also made of enamelled sheet metal . These jugs could be kept warm on the stove. The nobility and bourgeoisie soon introduced the porcelain jug that was placed on the coffee table . Heatable metal jugs, some of which were called coffee machines , were developed for everyday use in the 18th century . In northern Germany they were also called crane jugs , as they had no pouring spout, but small taps ( cranes ) above the floor. To keep them warm, metal vessels with smoldering coals were placed underneath; from 1900 there were also models that were electrically operated.

The complete coffee service consisted of a jug and cups, a milk jug and a sugar bowl . Working-class and peasant families, on the other hand, did not have any special coffee sets until well into the 20th century.

A complete tea set consisted of the jug, cups, saucer, milk jug and sugar bowl, which were also used for the coffee service, as well as the flushing bowl and the tea urn.

A complete tableware for several people is a set of crockery items that belong together and have a uniform shape and the same patterns (decor). It is also called the service ([ zɛʁˈviːs ] or [ sɛʁˈviːs ], not to be confused with the originally English word, the service [ ˈsøːɐ̰vɪs ]). According to the main use, a distinction is made among other things between coffee , tea and breakfast service , dining or dining service and combined service . Originally, a service was only used on festive occasions and was mostly reserved for the rich upper classes. With industrialization, tableware found its way into middle-class circles and in the 20th century was part of the equipment of most family households in industrialized countries. Commercially available sets usually contain complete place settings for 2, 4, 6, 12 or multiples of 12 people.

A tea service usually only contains tea cups, consisting of a cup and saucer, a teapot with a warmer as well as a milk jug and sugar bowl or shaker, which may be on a shared plate. As included or optional accessories, there are sometimes tea bag plates and étagères or bowls for pastries and milk jugs . A coffee service, on the other hand, usually contains coffee cups and optionally a coffee pot without a warmer as well as cake plates .

The components of a mocha service are similar to the coffee service, but it has smaller cups. In addition, there may be other special cups and mugs with and without handles in a collection that are not offered as a separate service, e.g. B. Bols . The breakfast service includes at least one type of cup, usually with a matching jug, as well as bread or breakfast plates , rarely board , and often egg cups and sometimes cereal bowls and a butter dish . Accessories such as honey and jam pots or pepper and salt shakers are rarely part of the service.

A dinner or dinner service usually does not contain cups, but at least large flat dinner plates and deep soup plates , often also a salad or dessert plate .

Bowls of various sizes and shapes , possibly with lids , and plates as well as other crockery for serving dishes must usually be purchased individually or together as a serving service. A dinner service contains the components of serving and dining services.

A combined service combines at least two other types of service, often a dinner service and a coffee service.

Dinnerware for on the go

Cutlery of the German Bundeswehr

Compact eating utensils for the military , camping or picnics became popular in the 20th century. The pail was in the 1950s and 1960s a widespread, zusammensteckbares and portable utensils for workers, which also served for storage of food, as well as the thermos for hot drinks.

So-called travel services have existed since the 17th century. Nobles always carried their own crockery and cutlery in special suitcases with them on their travels well into the 19th century, as there were no fine crockery in the inns and the use of inappropriate plates, drinking vessels and cutlery was generally not an option. Some of these suitcases contained tableware for up to twelve people. It also contained various utensils such as egg cups , spice vessels, bowls and serving plates. Particularly fine travel equipment, however, also served for pure representation and were gifts from the princes to one another. Travel mugs can be recognized by the fact that they had a lid.