Menu of a Portuguese restaurant in Lisbon, 2012

A menu is an overview of the products , services and prices of a catering establishment .

In everyday parlance, the term “card” of a company is abbreviated. It usually contains the range of food , drinks ( menu and drinks menu ) and - if offered - full menus . Some establishments put out separate menus, drinks, ice cream , desserts , cigars or wine lists . In terms of offer, price and design, menus are an informative testimony to their time. 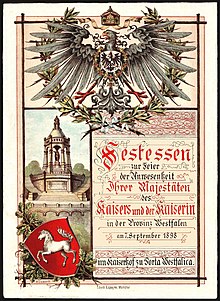 Menu for the feast for Kaiser Wilhelm II and Empress Auguste Viktoria on September 7, 1898 in the Hotel Kaiserhof, Porta Westfalica

Lists of dishes have been preserved from different eras. The Sumerian clay tablets already contained listed dishes, and the Romans and ancient Greeks probably also had their menus on wax tablets or papyrus. The oldest surviving “menu” is a long list of foods for the ten-day opening festival of the royal palace in Kalhu in 879 BC. BC, where 69,574 guests attended.

In the Middle Ages, the individual "traditional costumes" (sequence of dishes) were often proclaimed by heralds . The first written menu is known from the 16th century. From the Diet of Regensburg it is reported about Heinrich the Younger, Duke of Braunschweig, that at a festival in 1541:

“A long zedel was on the table with him, which he often looked at. In it, the kitchen mayster has recorded everyone eating and trying ".

Menus and menus as they are known today did not appear until the 19th century when the first public restaurants appeared in Paris around 1770. The first menu with price information is said to have been an invention of the Viennese innkeeper Josef Merina, who in 1784 was the first to present his guests with a “cake zeddl with tariffs” in the inn Zum Roten Apfel . In Vienna there was even an anniversary celebration for the 100th anniversary of the menu in 1884. Before that, "food slips" were (hand) written in the inns, but this was more of a menu card or a receipt in today's sense. Herbert Pirker writes in his book A certain Augustin N .: Legendary things from Austria and its capital:

“If you think of the red apple in the first district on Singerstraße 3, it should be said that the landlord here opened the first menu under the name“ Kuchlzettel ”in 1784, but that also in many other places in Austria such as in Sweden introduced the custom that in public inns there is a small tablet on which it is noted what a guest and passenger who is entertained with 4 or 6 dishes has to give in front of it. "

The menu has two basic functions:

In terms of text and presentation, the menu mostly reflects the demands of the kitchen and the overall concept offered by the innkeeper .

The shape of the menu is mostly rectangular, but there are also square, round, oval and irregularly shaped. The sheets are typically bound by cords, screws, clamps, gluing, stapling, spiral or ring bindings . The size usually varies from DIN A5 to DIN A3, special shapes and sizes vary. A menu often consists of an envelope or menu and the inside pages. A distinction must be made between different cover and interior materials, such as cardboard, paper, plastic or leather. When choosing the material, durability and the possibility of cleaning play an important role. The menu can also be presented as a book or, similar to a magazine or newspaper, consist of individual, folded or bound sheets.

Since the provision of printed menus in small numbers is relatively expensive, advertisements are sometimes integrated. In some cases, third parties, such as breweries and beverage suppliers, also contribute to the costs.

The menu can also be created in other ways, e.g. B. in a personal conversation, via a digital network or in the form of inscriptions on boards, light boxes, posters, mirrors, etc., can be presented.

According to German law, the design of a menu is subject to regulations from various areas of law. In principle, similar regulations apply in Austria and Switzerland.

The Price Indication Ordinance stipulates in § 7 that the innkeeper has to keep price lists. These are "either to be placed on tables or to be presented to each guest before orders are accepted and upon request when invoicing or to be clearly legible". In the case of beverages that are dispensed in calibrated containers ( Section 9 of the Verification Act ), the filling size in liters / ml to which the dispensing price refers must also be specified. The prices must indicate final prices, i.e. possibly include service charges, taxes and other surcharges. The separate indication of music surcharges or the surcharge for place settings that used to be common in Italy is not permitted.

At least a meaningful selection of the food and drink prices must be displayed next to the entrance to the restaurant so that everyone can easily see it.

The Restaurant Act also stipulates in Section 6 that “at least one non-alcoholic drink should not be more expensive than the cheapest alcoholic drink”, based on the liter price ( apple juice paragraph ). As a price list, the menu was also a commercial document that was subject to a retention period of at least six years , which resulted from Section 147 of the Tax Code . According to new case law (Bundesfinanzhof 2011), these no longer need to be kept.

With his menu, the innkeeper also provides information about which foods he is placing on the market. In addition, in food law, mainly laid down in the food, consumer goods and feed code , there are basic information obligations and definitions of terms that are intended to protect the consumer from deception. These must be observed in the content of the menu and are subject to penalties or fines if they are violated.

The Additive Admissions Ordinance deals with the content and designation of all additives ( § 9 ) that must be expressly identified in the menu by adding terms (such as "with color", "contains flavor enhancers") or by footnotes. This applies not only to the finished products such as beverages given to the guest, but also especially to additives in purchased foods that are processed into the dishes on the menu. The innkeeper is obliged to gain knowledge of the additives in these basic products and to mark them on his menu insofar as they have become an integral part of his end product. In view of the spread of allergies, the term should significantly thereby be more strictly. The negligent omission of such labeling obligations can also trigger direct claims for damages on the part of a customer who has been damaged by a missing declaration.

In the German Food Book and its catalog of guiding principles, but also in many other special legal provisions, the use of individual terms to denote food and beverages is defined. One example is the distinction between Wiener Schnitzel, which defines a veal schnitzel, and the "Wiener Art" schnitzel, which can be pork or turkey. Well-known definitions can also be found in wine law and on the subject of mineral water and fruit juice . Even if these term definitions have no legal force, they do reflect a generally binding consumer expectation. In addition, there is a risk of using trademark- protected terms such as “Spezi” for a product that is only offered in a similar way, ie under a different name.

By presenting the menu, the innkeeper undertakes to adhere to the quality of the products on offer. It does not matter what idea he himself has of this quality, but how it is defined in a generally binding manner according to the above principles. An incorrect declaration of the products offered will be viewed as deception according to Section 11 of the Food Act , even if it was made negligently or in ignorance of the facts. Because of the confusion of these basics, it is always advisable to contact the responsible trade supervisory authority before publishing or printing a menu.