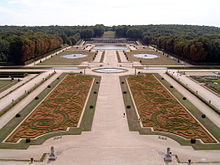 View from the dome of the chateau over the garden of Vaux-le-Vicomte . The visual axis leads into the horizon, the broderie beds lie in front of the facade, the background is designed with calm lawns

The first baroque gardens were laid out in France during the Baroque period , which is why they are also called French gardens . The formal strict gardens of the French Garden and the more natural English Garden are still one of the two basic forms of traditional European garden architecture .

The development of the baroque gardens

The idea of ​​the baroque garden goes back to the Italian gardens of the Renaissance . However, if the Renaissance garden was sometimes a little smaller, designed in a smaller space, a little less differentiated, also formed by stringing together different so-called compartments and often with an even less pronounced relationship to the respective building, the baroque garden is part of the overall architectural concept of the Castle. The development of baroque architecture and garden art ran largely in parallel, the designs of the large-scale gardens were part of the self-image of the absolutist princes, who expressed power and prosperity with the help of restrained nature. The castle and park of Vaux-le-Vicomte are to be regarded as milestones in Baroque garden art . The most important garden architect of the Baroque was André Le Nôtre . His works and the work of his students, such as Dominique Girard , influenced garden design throughout the epoch. The planning of the gardens was carried out in direct cooperation with the architects of the residences.

The palace gardens , the palace , the outbuildings and often also a village in front of the residence, as in Karlsruhe , Mannheim and Versailles , form a design whole. The garden itself is also structured geometrically with main and secondary axes formed by canals, basins or paths. Usually a central visual axis is surrounded by a system of parallel paths that intersect at regular intervals at right angles and in a star shape. The compartments separated in this way are designed by geometrically trimmed trees and bushes, hedges and flower beds in ornamental shapes, lawns and southern plants (which are housed in an orangery in winter ). In addition, accents are often set by stairs, canals, grottos, fountains and water features. In keeping with the age of rationalism , the baroque garden is an entirely artificial structure created by man. During the planning, great importance was attached to regularity and symmetry.

The construction of the baroque gardens sometimes required thousands of workers. In many places, large areas of swamp or forest had to be reclaimed, kilometer-long canals were built for design reasons, but above all for irrigation and drainage. Hosts of gardeners were just as busy growing flowering plants as they were pruning hedges. The large and small royal courts of the epoch with their enormous court holdings and large gardens were important employers and economic factors.

From the middle of the 18th century, the baroque gardens were gradually replaced by the English landscape garden , which better suited the spirit of sensitivity . Fully preserved Baroque gardens are rarely found today. In many places the maintenance-intensive baroque garden disappeared completely, often it also mixed with the new style of the landscape park.

The system of baroque gardens

Common to all areas of the baroque garden is the decoration program. The Greek and Roman mythology were favorite themes of the era, the events and figures were presented in magnificent fountains and groups of figures. At the beginning of the 18th century, exoticism also took on a greater role, and the gardens were furnished with interpretations of Chinese temples or Turkish teahouses. Since the baroque park primarily served to glorify its owner, allegories of his deeds or his rank can also be found. One example are the water basins in front of the Palace of Versailles; these are adorned with statues that represent France's largest rivers and thus symbolically announce the size of the country.

The classic French-style baroque park is divided into a specific sequence of garden areas:

The ground floor is in front of the garden facade of the palace . The terrace-like areas in the immediate vicinity of the castle are most splendidly decorated and created for the top view from the bel étage. Ornamental lawns, flower borders, box trees trimmed according to Ars Topiaria and water features create baroque elements and figures. The surfaces are sprinkled with colored gravel and imitate fine embroidery, these so-called broderie parterres are the artistic highlight of a baroque garden. They initiate the transition from the garden world to the mostly equally richly decorated facades of the palace. Farther away from the castle, fewer flower plantings are cultivated and instead lawn carpets, so-called tapis vert , or large water basins are created; these quiet areas are intended to tune the senses to the actual splendid beds in front of the main facade. A special form of the parterre is the parterre de pièces coupées pour les fleurs .

The bosket is the lower forest-like artificial hedge part of the baroque garden. Its mostly straight outer sides are formed by dense hedges or low trees cut into geometrically precise shapes. The Boskette are almost always mirror-symmetrical and are mostly parallel on both sides of the main axis of the garden. The areas structured in this way contain small lounges (garden rooms) in the open air, they to a certain extent repeat the interior of the castle in the outside world. Various uses are intended for the bosquettes, for example hedge theaters , mazes or open “concert halls” can be found here . They can also provide the framework for pavilions or small pleasure palaces .

The paths lead from the Boskette into the extensive forest area of ​​the park. Long avenues are brought together in fans or star-shaped aisles , the horizon playfully extended into the distance. Due to the axial structure, the hunting areas could easily be reached and, thanks to the large number of paths laid out, they could also be comfortably traveled by carriages. The actual forest served as a hunting area for the court society, thus fulfilling the necessary function as both a food acquisition area and a place of entertainment.

Originally based in France, some of the baroque gardens in Europe continued to develop in style. The basic motifs of the French garden were usually preserved, such as trimmed bosquets, a mythological sculptural decoration and the structure through visual axes, but the individual components were later composed differently.

The garden architecture of the Dutch was particularly influential . While the French garden, shaped by Le Nôtre, is characterized above all by the use of wide areas of water and lawns, deep lines of sight and a relatively modest flower arrangement, the Dutch gardens are more detailed and less concerned with long-distance effects, but more lavishly decorated with magnificent broderia. The extensive trade contacts between the Dutch at the time led to the intensive use of imported flowers in the gardens. The most famous work of a Dutch garden can be found in Het Loo . The grounds influenced by Dutch models include the Great Garden in Hanover and the gardens of Frederiksborg Palace in Denmark.

In the first half of the 18th century, the spacious baroque gardens developed into more intimate Rococo gardens . In the Rococo grounds, the oversized open spaces of the French gardens were mostly dispensed with and the individual areas were given more modest dimensions. The symmetrical basic concept of the classic French garden was partly abandoned and a powerful main axis was dispensed with. In the figurative decoration there was a move away from heavy, mythological motifs towards cheerful depictions with groups of putti or bacchants . The bosket was decorated in the form of playful hermitages and ruins, so-called follies .

The garden of Veitshöchheim Palace or the grounds of the Bayreuth Hermitage are examples of a Rococo garden . In northern Germany, the garden of Traventhal Castle was famous, a historicizing variant was created in the 19th century at Linderhof Castle . 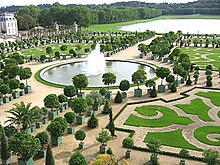 Plan of the parks of Versailles; you can see how profoundly the path system includes the landscape 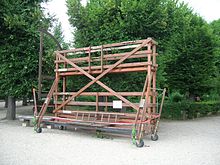 Detail of a Broderieet in the Great Garden in Hannover-Herrenhausen 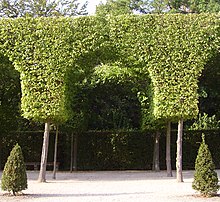 The bowling alley, Nymphenburg Palace . Historical view according to Disel, 1722 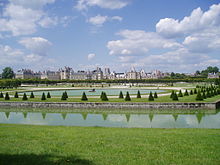 Broderie area in the garden of Frederiksborg Castle on Zealand

It should be noted that not all Baroque parks have been completely preserved and that in many places parts of the gardens have been redesigned over the centuries.

in alphabetical order by country