Both castles are among the most important baroque and rococo buildings in Germany. They have been UNESCO World Heritage Sites with the palace gardens since 1984 .

History of the castles

As early as the 12th century, the Archbishops of Cologne owned an estate with a wildlife park here. In 1284 the Archbishop of Cologne Siegfried had a moated castle built as a bulwark against the city of Cologne, which was completed in 1298. The castle was strengthened under Archbishop Walram . It became the seat of the bailiff of the Cologne Electoral Office in Brühl . It survived until 1689, when it was finally blown up by the French in the Palatinate War of Succession . 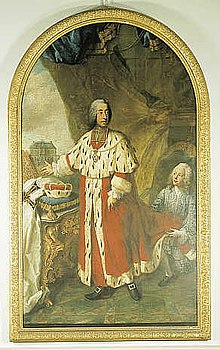 The Archbishop of Cologne, Clemens August I of Bavaria (1700–1761) from the Wittelsbach dynasty , had Augustusburg Castle built on the site of the ruins. Shortly after Clemens August 1723 had succeeded his uncle Joseph Clemens of Bavaria as Archbishop of Cologne, work on the castle began in 1725 according to plans by the Westphalian architect Johann Conrad Schlaun , with the foundations of the previous building being used for the new castle. Both the basic idea to build a castle at this point (on the ruins of the old state castle) and the inclusion of the previous building in the construction measures were concepts that Clemens August took over from Joseph Clemens. For this reason, the window axes of the side wings are not completely symmetrical, as the width of the castle at this point corresponds to the older building. This is unusual in that symmetry was one of the most important means of expression during the Baroque period . Augustusburg Palace is a three-wing complex with a mansard hipped roof that surrounds a courtyard . The east-facing front sides of the north and south wings are among the most important works of the German Baroque.

From 1728 onwards, the new building was furnished by the Munich court architect François de Cuvilliés , who designed the facades and the parade rooms in the style of the Regency and the early Rococo. The west side with the gallery wings was also built at this time. Balthasar Neumann created the staircase from 1740 to 1746, which is considered to be one of the main creations of the German Baroque (actually Rococo). The flights of stairs and platforms lie within a high, wide hall, an idea by Enrico Zuccalli for the New Schleissheim Palace , which was built for Clemens August's father, Elector Max Emanuel. Johann Heinrich Roth carried out the final interior work. The garden room on the first floor is decorated with yellow and green stucco marble and structured by pilasters . The ceiling fresco is by Carlo Carlone . The entire design of the room serves the fame of the Wittelsbach family. Carlo Carlone also designed the ceiling fresco in the stairwell. On the main wall in the stairwell, Prince-Bishop Clemens August is glorified with a golden bust and depicted in all his offices and dignities. The stucco work is by Giuseppe Artario , Carlo Pietro Morsegno and Joseph Anton Brillie . The staircase, damaged in World War II, was restored with the help of Polish restorers.

On the ground floor of the south wing are the apartments of the former prince-bishop, which open onto the garden. In the castle church of St. Maria von den Engeln , consecrated in 1493 and formerly part of a Franciscan monastery , there is an impressive high altar by Balthasar Neumann. In 1735 it was redesigned to the court church and subsequently connected to the castle by an attached oratory with the orangery wing.

Augustusburg Palace was designed as a residential and summer palace and as such was inhabited by the Elector for four to six weeks a year. The main residence at that time was the Electoral Palace in Bonn .

Towards the end of the Second World War , the castle was badly damaged. Restoration work began as early as 1946. Falkenlust also needed extensive restoration work after the war. From 1949 to 1996 the Federal President held receptions for state guests at Augustusburg Castle from March to November - in the winter months the Redoute in Bad Godesberg served this purpose. From March 12, 2008 to August 10, 2008, an exhibition entitled “A Republic rolls out the carpet - State receptions at Augustusburg Castle 1949-1996” took place in the castle.

Since the 2001 season, the management of the Brühl castles has been offering special themed tours to supplement the usual visits. Augustusburg Palace, the Palace Church and the park are also venues for the Brühl Palace Concerts . 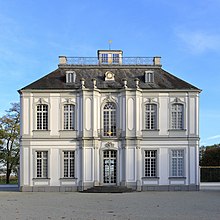 The Falkenlust hunting lodge was built by de Cuvilliés from 1729 to 1737 based on the model of the Amalienburg for the extremely popular falcon hunt . The actual castle is flanked by two flat outbuildings, from which a wrought iron lattice arches forward and separates the complex from the open landscape. The field side of the castle, opposite the avenue leading to the Augustusburg, points to originally uncultivated hunting grounds. Today, however, this view is obscured by construction work and arable farming. The ground plan of the hunting lodge is based on the Amalienburg . Like its role model, the hunting lodge has a viewing platform on the roof of the main building from which to watch the falcon hunt. In the central axis of the two floors there is an anteroom that leads to a salon. Behind it there is a bedroom, a cabinet and a cloakroom for the elector and a guest.

In the southern part of the castle is the staircase, which was decorated with Dutch tiles . The ceiling painting is by Laurenz de La Roque and shows scenes of the falcon hunt. The Falkenlust hunting lodge was set up by de Cuvilliés as a maison de plaisance and, in contrast to Augustusburg Palace with its representative claim, gave its rooms a private, homely and intimate character. In one cabinet, for example, you can find precious Chinese lacquer panels and hanging umbrellas, and in another a cabinet of mirrors has been set up. In the dining room, the life-size portrait of Elector Karl Albrecht of Bavaria , the brother of Clemens August, and the later Emperor Karl VII sits enthroned above the fireplace .

In 1730 a chapel (St. Maria Aegyptiaca) with rich shell decorations was built in the park of the hunting lodge. The small octagon was built by Peter Laporterie and decorated in the style of a grotto.

In 1760 Casanova gave a gala dinner for the Cologne mayoress vom Pütz and other women from Cologne society as part of the Brühl castle complex.

The castle belonged to the Giesler family from Brühl from 1832 to 1960. It then became the property of the State of North Rhine-Westphalia. Just like Augustusburg, Falkenlust Castle was used for state receptions for the Federal President, albeit much less often. A dinner hosted by Karl Carstens took place here on July 8, 1980 as part of the state visit of the French President Valéry Giscard d'Estaing . During a renovation of Villa Hammerschmidt in autumn 1984, the castle served as the provisional seat of the Federal President, so Richard von Weizsäcker received the Romanian head of state Nicolae Ceaușescu with military honors here on October 15, 1984 . Other guests at Falkenlust Castle were the Egyptian President Husni Mubarak, who was invited by von Weizsäcker to lunch with us on October 31, 1984, and the heads of state and government of the G7 countries who were attending the World Economic Summit in Bonn on May 2, 1985 . 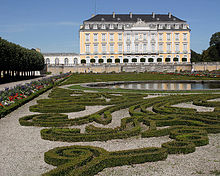 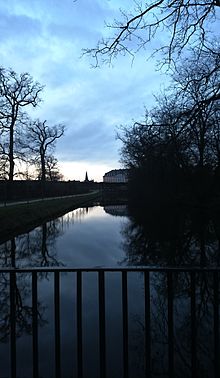 Augustusburg Castle seen from the garden 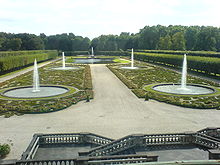 The castle has a typical castle park surrounded by bosquets . In contrast to many other contemporary castles, the splendid gardens were not positioned axially of the main facade - which in Augustusburg faces the city - but in front of the southern side wing. The designs for the garden parterres come from Dominique Girard , a student of André Le Nôtres . South of the castle, a two-part broderie parterre was laid out and decorated with two large water basins each with fountains. Another basin closes off the ground floor in the middle. A visual axis leads from the castle into the forest area.

The baroque garden was transformed into an English landscape garden by Peter Joseph Lenné in the 19th century . Attempts to reconstruct the system are difficult due to poor source conditions. Nevertheless, the main ground floor in front of the south facade of the castle was reconstructed in the years 1933–1935 under the direction of Georg Potente according to a plan from 1728. Further restoration and reconstruction work, as well as some new installations, took place after the Second World War, especially from 1983. The entire park complex contains several closed areas in addition to the main ground floor. Sun can be found below the Orangerie wing of the so-called " Secret Garden " (Jardin Secret). In the forest area of ​​the castle park, in the former zoo, was the "Chinese House", an exotic, 60 meter wide pavilion, built in 1747. This pleasure palace , following the then Chinese fashion, had to be demolished in 1822 because it was in disrepair. Parts of the canal system that surrounded the pavilion have been preserved to this day.

The main visual axis of the baroque garden is exactly aligned with the so-called Iron Man in the Kottenforst near Heimerzheim , approx. 14 km south . This arrangement is probably related to the system of paths around Herzogsfreude Castle in Röttgen that was built around the same time for the purpose of par force hunting .

Due to its careful reconstruction, the palace gardens of Augustusburg and Falkenlust are considered one of the most authentic examples of Baroque French garden art of the 18th century in Europe and a monument of garden art of international standing.

The grounds around the castles were classified as part of the Route of Garden Art between the Rhine and the Maas because of their excellent quality and historical significance .

The now natural outer part of the Augustusburg castle park of around 50  hectares with 300-year-old trees and a lush flora and fauna has been placed under nature protection.

In the front part of the palace park there is an avenue of plane trees around 110 meters long that was laid out before 1870. In 2005 tree examinations took place as part of the road safety obligation. Damage from wood-decomposing fungi was found. In order to protect the bird world (many tree cave breeders ) that live there, the responsible authorities decided to close the avenue to pedestrians. The old trees can now be viewed through a grid.

The German post office has been bringing in 2017 the series Castles - Castle Falkenlust at Brühl as 0,70- € - Stamp out.

As part of the commemorative coin series with motifs from UNESCO World Heritage sites in Germany, the 2018 gold coin with a face value of € 100 shows the castles of Augustusburg and Falkenlust.