Joseph Clemens Kajetan of Bavaria (born December 5, 1671 in Munich , † November 12, 1723 in Bonn ) was Archbishop of Cologne from 1688 to 1723 , Elector of the Holy Roman Empire , Lord of the Archbishopric of Cologne and Arch Chancellor for Imperial Italy and the owner of other imperial bishoprics and ecclesiastical dignity. His election as Archbishop of Cologne, enforced by the emperor and pope against the interests of Louis XIV , was one of the triggers for the Palatinate War of Succession . He later switched fronts and formed an alliance with France. During the War of the Spanish Succession he was placed in privation and had to flee into exile in France . It was only after more than ten years that he could return and exercise his offices in the empire.

Joseph Clemens was the second of four sons of Elector Ferdinand Maria of Bavaria and his wife Henriette Adelaide of Savoy to reach adulthood. He had six siblings and was the second youngest child. One of his brothers was Elector Max Emanuel of Bavaria . He was an uncle of Karl Albrecht von Bayern, who as Charles VII was Emperor of the Holy Roman Empire. He was also the nephew of the Cologne Elector Maximilian Heinrich von Bayern .

Joseph Clemens von Bayern on a painting in the Fürstengang Freising

From his earliest youth he was destined for the clergy and was educated accordingly. The actual entry into the clergy was initiated by his brother Max Emanuel and happened against the will of Joseph Clemens, who would have preferred to become a soldier. In 1683 he received his first tonsure and became coadjutor for the diocese of Regensburg . In 1684 he became coadjutor of the diocese of Freising , 1685 coadjutor, 1688 prince provost of the prince provostie Berchtesgaden . Although still a minor , in 1685, after the death of his cousin Prince-Bishop Albert Sigmund, he was succeeded by Pope Innocent XI in the office of Bishop of Regensburg and Freising . approved. However, he initially renounced the higher orders. This was not uncommon at the time, and it also kept the option of succeeding his brother Max Emanuel open if he had no descendants. 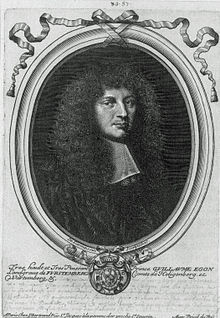 Joseph Clemens was completely under the control of his brother. The main goal of Max Emanuel was to secure the succession of the Cologne elector and archbishop Maximilian Heinrich of Bavaria through the person of Joseph Clemens of the Bavarian line of the House of Wittelsbach . However, this project turned out to be unexpectedly difficult. The influence of his nephew Max Emanuel on Maximilian Heinrich was significantly weaker than that of the brothers Franz Egon and Wilhelm Egon von Fürstenberg . They were both supporters of Louis XIV and represented his policy in the empire. The political leadership of Kurköln was in fact in the hands of Wilhelm Egon von Fürstenberg. Maximilian Heinrich wanted to secure this and not Joseph Clemens the successor in Cologne. At the beginning of 1688 Maximilian Heinrich succeeded in getting the Cologne cathedral chapter elected Fürstenberg as coadjutor and thus the potential successor of the Cologne elector. French bribes played an important role in this. Pope Innocent XI, who was anxious to prevent a further expansion of Louis XIV's influence, refused to approve the election.

For this reason, a new election became necessary after Maximilian Heinrich's death shortly afterwards. Wilhelm Egon von Fürstenberg and Joseph Clemens appeared as candidates. Since relations between Bavaria and Habsburg had improved in the meantime, Emperor Leopold I also supported the Wittelsbacher. Of the 24 eligible voters, thirteen voted for Fürstenberg and only nine for Joseph Clemens. The decision wasn't as clear-cut as it seems. For the election to be valid, both candidates would have required a two-thirds majority because they did not belong to the Cologne cathedral chapter and were already bishops in another diocese.

Nonetheless, Wilhelm Egon von Fürstenberg considered himself the elected archbishop and elector. He immediately set about creating facts. He had the royal seat of Bonn and all other important places militarily occupied. The emperor and the electoral college then turned to the pope. This declared the postulation of Fürstenbergs invalid and declared Joseph Clemens archbishop. On the one hand, the Pope disregarded the fact that Joseph Clemens had not actually reached the necessary canonical age at the age of seventeen and, on the other hand, had not received a two-thirds majority. The reason was that the Pope wanted to prevent the French influence from growing further. Soon afterwards this received the imperial confirmation. Louis XIV did not accept the papal-imperial decision and sent von Fürstenberg a strong army to help. This intervention in imperial affairs was one of the central triggers for the Palatinate War of Succession. Louis XIV was faced with an almost closed alliance between most of the European powers.

An imperial and a Brandenburg-Dutch army fought to enforce Joseph Clemens' claim to power. The war was changeable. Various cities in the Electorate of Cologne, including Bonn , were destroyed. The Brühl moated castle was destroyed by French troops as early as 1689 . Reconstruction began as soon as we returned. Since Joseph Clemens had thus lost the most important residences, he mostly stayed in Bavaria. This was criticized by the estates. During the war, Joseph Clemens founded the Order of St. Michael, which is only open to aristocrats, in 1693 and, as a counterpart, the Archbrotherhood of St. Michael , which still exists today . Ultimately, the allies prevailed. Wilhelm Egon von Fürstenberg lost power in Kurköln, but in the Peace of Rijswijk he got back his goods and offices including the diocese of Strasbourg. However, he no longer resided there and retired to Paris.

In 1694, Joseph Clemens was also elected coadjutor of the Hildesheim diocese . He became bishop there in 1702. After difficult electoral disputes, he also became Prince-Bishop of Liège in 1694 . Although he received from Pope Innocent XII. confirmation of this office, but the Pope called his accumulation of episcopal dignity inadmissible and demanded the abandonment of the episcopal offices in Regensburg and Freising. Joseph Clemens resigned from the bishopric of Freising and Regensburg, but was re-elected bishop in 1695 by the cathedral chapter of Regensburg. There was no re-election in Freising. The attempt to also become bishop in Münster , where Joseph Clemens held a canon position, failed when the War of the Spanish Succession broke out.

The actual government was headed from the beginning by his chancellor Johann Friedrich Karg von Bebenburg . The attempt to strengthen the power of the prince in Kurköln and in the Hochstift Liège met with resistance from the estates led by the cathedral chapters. The elector was unable to assert himself against this.

Although he owed power in Cologne to the emperor, Joseph Clemens did not believe he was sufficiently supported by him. After the Peace of Rijswijk , he began to orientate himself towards France. Joseph Clemens received considerable subsidies from France, which he used in particular to rebuild the destroyed castles. Shortly before the start of the War of the Spanish Succession , Joseph Clemens entered into an alliance with Louis XIV of France. He followed the course of his brother Max Emanuel. 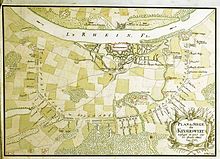 Kurköln became a theater of war again and there was considerable devastation. Bonn was then occupied by troops loyal to the emperor in 1702 and Joseph Clemens fled into French exile in Namur . In the same year he became Bishop of Hildesheim . From 1704 he stayed in Lille and from 1709 to 1714 finally in Valenciennes . Under the influence of the writings of the Bishop of Cambrai François Fénelon , he received the ordination of priests and bishops, which had previously been avoided. Although this decision might actually have something to do with his piety, this did not prevent him from entering into a relationship with Constance de Grousselier. Several children emerged from this relationship.

Emperor Joseph I imposed privation or imperial ban on Joseph Clemens and Max Emanuel in 1706. During this time of the de facto vacancy, the cathedral chapter led the government in Kurköln and in the adjoining duchy of Westphalia . The Cologne cathedral chapter under the leadership of the cardinal and cathedral provost Christian August von Sachsen-Zeitz was predominantly imperial-oriented and, together with the estates, also carried out the official removal of Joseph Clemens. For reasons of canon law, the Pope did not follow this.

In the Treaty of Baden and Rastatt (1714) he was given back all his dignities and lands. When he returned to Bonn in 1715, he also brought his lover Konstanze de Grousselier with him. He declared that he had not had an intimate relationship with her since his episcopal ordination, but that could not be true after the birthdays of his children.

From France he brought lasting impressions of the court in Versailles . The Electoral Cologne court was expanded and Joseph Clemens awarded extensive artistic commissions. He had the Poppelsdorf Palace built. The Rococo style found its way into the Rhineland. He also began planning the Poppelsdorfer Allee , which, however, was no longer laid out during his lifetime. The high building and farm expenses brought him into various conflicts with the cathedral chapter and the other estates.

At times he stayed in the Duchy of Westphalia. For the duchy he issued the regulation in 1716 that the subjects were not allowed to work as servants and maids in Protestant places. He issued road construction regulations in 1717 and new police regulations in 1723, which interfered with the previous rights of cities and freedoms.

Joseph Clemens was also interested in literature and music and is said to have written plays in French and pieces of music himself. He had a large court orchestra and concerts, operas and theater performances were often held in his day. The index of music in his estate index filled 25 pages.

Despite his life as a pompous Baroque prince, he did not neglect his church duties after his return. Under the influence of Fénélon, he rejected Jansenism . During his time, a new edition of the Cologne Breviary appeared in 1718 and a new Cologne Agende in 1720. It is also noteworthy that under his rule a new Jewish order was enacted, which remained in force until the end of the electoral state. The same applies to the police regulations of 1723.

Joseph Clemens died in Bonn on November 12, 1723. Like his Wittelsbach predecessors, he was buried in the chair of the Archbishop of Cologne in front of the Epiphany Chapel inside Cologne Cathedral . His heart was buried separately and is located in the Chapel of Grace in Altötting .