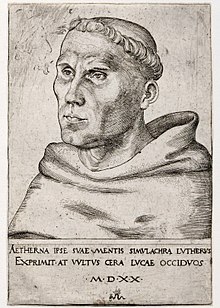 Martin Luther with a Roman tonsure 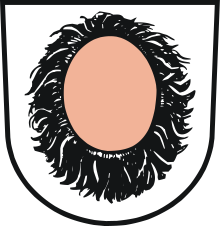 The tonsure ( Latin tonsura "scissors", from special "scissors" ) is the complete or partial removal of the scalp hair for religious reasons or the resulting hairstyle. It is known from different religions such as Christianity, Buddhism or Hinduism. Also in the ancient Egyptian religion there were priests with tonsure. It was customary for Catholic clergy to shave a larger or smaller area of ​​the scalp so that a fringe of hair was left.

The original meaning of tonsure is unclear. Penitents had their heads shaved early on. In this respect, the tonsure can be interpreted as a sign of complete turning to God in the consecrated life. An opposite position can be seen in Orthodox Judaism, which forbids members of the priesthood of Aarons any hair removal.

The first monks took over this custom from the penitents and hermits and from these it passed in the 6th century to all Christian clergy, to whom it was legally prescribed in 633 at the fourth council of Toledo .

Those who had just entered the clergy wore them to the size of a smaller coin , the priests to the size of a host , the bishops even larger, and with the Pope only a narrow circle of hair remained over the forehead. The shearing preceded the consecration and was repeated weekly or before every major festival. The execution was quite different in the orders. The Carthusians only left a narrow strip of hair horizontally over the ears and thus open on the stern side, otherwise the head was shaved smooth. Other monastic orders such as B. the Cistercians of the Mehrerau congregation contented themselves with shaving their hair. The stripe of hair was placed slightly upwards at an angle to the front so that hair still remained above the forehead. There was almost a wreath of hair. The Benedictines of the Beuron Congregation drew two parallel strips that were only millimeter wide and cut horizontally over the ears into the shaved head. The Franciscans and Capuchins left a broader fringe of hair on their foreheads.

There were often special hairdressers who went from monastery to monastery to re-cut the monks' tonsure. There were also special hats that only covered the bald part of the head to protect the monks from drafts. Most of the time, a leather belt was simply put on and both sides were shaved or shaved.

With effect from January 1, 1973 the tonsure by Pope Paul VI was in the area of ​​the Catholic Church . abolished.

It is still practiced in some old ritual Latin communities, such as the French Benedictine abbey of Sainte-Madeleine du Barroux , the Bellaigue Abbey and the Abbey of the Pius Brotherhood of Reichenstein Abbey . In Orthodoxy , too , the tonsure is still a rite of acceptance in the first and every subsequent degree of monasticism.