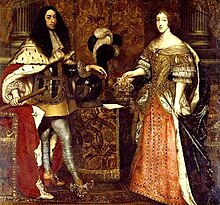 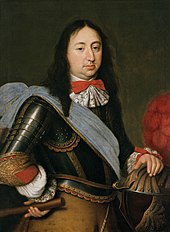 Ferdinand Maria, illustration from a coronation diary from 1658

Coffin of Ferdinand Maria in the Theatinerkirche

Ferdinand Maria von Bayern , known as the Peace-loving (born October 31, 1636 in Munich , † May 26, 1679 in Schleissheim ) was Elector of Bavaria from 1651 until his death . His government was determined by the reconstruction of the country after the devastation of the Thirty Years War and by a policy of neutrality between the Habsburgs and France. The time of Ferdinand Maria and his Savoyard wife culturally marked the arrival of the Italian Baroque in Bavaria.

Ferdinand Maria was the eldest son of Elector Maximilian I of Bavaria and his second wife Maria Anna , the daughter of Emperor Ferdinand II , who was also his godfather. In military matters Ferdinand Maria was instructed by Johann Wilhelm von Hunolstein and Ferdinand von Puech , in political science by the Jesuits . After thorough training, his father Maximilian I married him to Henriette Adelaide von Savoy, who was also only 14 years old, on December 11, 1650 by procuration in Turin .

After the death of his father in 1651 he was first under the tutelage of his mother, who was regent during this time. His uncle, Duke Albrecht , acted as state administrator. Johann Adlzreiter von Tettenweis remained secret council chancellor . Maximilian left the new elector not only with a state treasure that was once again available and free of war debts, but also with the "Memories and Admonitions" written by hand shortly before his death on the practical policy of a "good Prince".

Thanks to Ferdinand Maria's wife Henriette Adelaide von Savoy , the Italian Baroque moved into Bavaria with numerous musicians, artists and architects. As soon as the Electress arrived in 1652, the Munich court society was confronted with the fun-loving Italian court culture of the Savoyardin. In 1657 the opera house on Salvatorplatz in Munich was completed, the first free-standing one on German soil. In 1660 a tournament and redoubt house was built in the Hofgarten . The court amusements, including the opera house, remain closed to the population. Musical life at court was determined by masters such as Giovanni Giacomo Porro , Johann Caspar von Kerll and Ercole Bernabei , and from 1670 both a French and a German drama troupe made guest appearances in Munich.

After the long-awaited heir to the throne, Max Emanuel, was born in 1662, the Electoral couple commissioned Nymphenburg Palace and the St. Kajetan Court Church to be part of the Theatiners . With these buildings the Italian high baroque finds its way into Munich. Local artists were now largely replaced at the court by Italian masters. The court architect was initially Agostino Barelli , then Enrico Zuccalli and Giovanni Antonio Viscardi were appointed, whose style was decisive for many decades in the electorate. A joint four-month trip to Italy by the electoral couple in 1667 was also used to visit Rome by the Pope, but above all it meant a further cultural enrichment. At Schloss Berg on Lake Starnberg , festivals were celebrated with a Venetian fleet of gondolas around the Bucentaur , even though Ferdinand Maria was otherwise rather sparing with courtly grandeur.

The Elector Michael Wening , whose main work Historico-Topographica Descriptio is considered to be the most comprehensive description of Europe in the early modern period , employed the court copper engraver . Ferdinand Maria issued new school regulations as early as 1659, which were then valid for a century and were based on the ideal of compulsory schooling.

After the severe devastation of the Thirty Years' War, the main focus of the Elector was on regenerating the battered country. Its thirty years of peace were an essential prerequisite for the consolidation of the country and the development of the baroque in Bavaria. This included a very economical economic and financial policy, support measures in favor of the peasant class, for whom he also established the first Bavarian agricultural school in Schleissheim, and reforms of the authorities and the army.

In the 17th century, the Thirty Years' War and the growing power of the sovereign principality (according to the ideas of absolutism ) began the decline of the estates in Bavaria , which were based in the old landscape building in Munich. The state parliament, which had been suspended since 1612, was convened for the last time in 1669. The expansion to a centrally controlled official state, whereby this replacement of the Bavarian state parliament by the permanent state committee and the refusal of a state constitution for the Upper Palatinate played an important role, brought further approaches to princely absolutism in Bavaria. Ferdinand Maria also had the first Bavarian municipal ordinance drawn up.

Like his ancestors, Ferdinand Maria stuck steadfastly to Catholicism, which included the rebuilding of almost all secularized monasteries in the Upper Palatinate, which had finally become Bavarian, and the promotion of some religious orders.

Due to his cautious policy towards the Habsburgs and France under Louis XIV , the elector was able to keep the peace for Bavaria and, by introducing mercantilist economic methods, overcame the consequences of the Thirty Years' War there faster than in other German countries. Attempts to set up manufactories based on the French model, however, had little lasting success, despite some advances in cloth and silk production by Johann Joachim Becher, who was in Ferdinand Maria's service . This also achieved tariff relief for the salt trade to Bohemia.

When King Ferdinand IV died in 1654, the French Cardinal Jules Mazarin proposed to the Bavarian Elector in 1655 to be his successor. After long hesitation, Ferdinand Maria finally refused this on August 24, 1657, to the disappointment of the Electress. Instead, he committed himself in a contract of Waldmünchen on January 12, 1658, to support the election of the Habsburg Leopold as emperor (see vicariate coins 1657 ). In return, the Habsburgs decided the protracted dispute between Ferdinand Maria and his cousin Karl Ludwig von der Pfalz over the important office of imperial vicar in favor of Ferdinand Maria. After the death of Emperor Ferdinand III. In 1657, the first interregnum after the Peace of Westphalia , the dispute between the Wittelsbachers in Bavaria and the Palatinate over the vicariate had taken on almost dramatic forms, which were expressed above all in massive obstacles to the Imperial Court of Justice in Speyer and led to downright riots there. It almost came to an armed conflict between Bavaria and the Palatinate.

At times there were plans to acquire Bavarian colonies , including at Nieuw Amsterdam (now New York ), but because of the cautious policy of the elector, this project was abandoned. Between 1662 and 1664 Bavaria took part in the Turkish Wars with auxiliary troops .

In 1662, Maximilian Kurtz von Senftenau , the Elector's Habsburg-friendly advisor, died as the actual head of Bavarian politics. Kaspar von Schmid , who also became Chancellor in 1667, succeeded Johann Georg Öxle . Together with Obersthofmeister Hermann Egon von Fürstenberg and Henriette Adelaide, the three formed the so-called "French Trinity" at the electoral court, which has prevailed especially since the death of the Habsburg mother elector Maria Anna from 1665. Bavarian claims to the legacy of the House of Habsburg now led to an alliance with France. On February 17, 1670, Ferdinand Maria signed a ten-year alliance with France in Munich. In it he pledged to support the French royal family in their claims to the Spanish heritage. Due to the lack of male descendants, the rule of the Habsburgs over the lands of the Spanish crown was drawing to a close at the end of the 17th century and the Spanish succession became the subject of general attention in European diplomacy. France paid 180,000 thalers for this and pledged to pay 400,000 thalers a year if Bavaria should take part in acts of war. Despite the contract and against the wishes of his wife, Ferdinand Maria remained neutral in the Dutch War from 1672. Unlike his cousin, the Cologne Elector Maximilian Heinrich von Bayern , who was also increasingly pro-French , Ferdinand Maria did not allow himself to be drawn into the war in the West. He used the French money to build an army based on the French model. From then on, Bavaria became the spokesman for a policy of neutrality in the empire, which, however, significantly favored the establishment of France's supremacy in Europe.

In 1674, half of the Munich residence was destroyed by fire , and almost two years later, on March 18, 1676, the Electress, who had been ailing since then, died at the age of 39. Ferdinand Maria died in 1679 a few years after the death of his beloved wife in Schleißheim Palace . Although Ferdinand Maria had a Jesuit as a confessor for life, it was the Theatine Antonio Spinelli who handed him the sacraments in 1679 in Schleissheim Palace , since the Jesuit Father Bernhard Frey had left for Munich a few hours before the Elector's death.

Ferdinand Maria was buried in a coffin in the princely crypt in the Theatine Church he built. Also in the crypt his heart and entrails rest separately in a pewter vessel. The marriage of his eldest daughter Maria Anna Victoria to her cousin the Grand Dauphin the following year was a late result of the Bavarian alliance with France. When Ferdinand Maria died, the state coffers were well filled; he had increased the state treasure he had inherited from his father.

Elector Ferdinand Maria married Princess Henriette Adelaide (1636–1676), daughter of Duke Viktor Amadeus I of Savoy and his wife Princess Christina of France, in Munich on June 25, 1652 . The marriage had eight children: