The head of 2Pac as graffito

Tupac Amaru Shakur (born June 16, 1971 as Lesane Parish Crooks in Manhattan , New York , † September 13, 1996 in Las Vegas , Nevada ), also known by his pseudonyms 2Pac and Makaveli , was an American rapper , musician and actor . He sold around 75 million records worldwide. His archive recordings were also successful sales after his death.

Tupac Shakur was born Lesane Parish Crooks on June 16, 1971 in East Harlem in the New York borough of Manhattan and was officially renamed Tupac Amaru Shakur one year after his birth . He grew up with his half-sister Sekyiwa Shakur with his mother Afeni (* 1947; † 2016) in poor circumstances. He met his biological father, William "Billy" Garland, a former Black Panther member, as a grown man. His stepfather, Mutulu Shakur - brother of civil rights activist Assata Shakur , father of his half-sister and Tupac's stepbrother Mopreme Shakur - was sentenced to 60 years in prison after a bank robbery. Shakur owes his first name Tupac Amaru to the affiliation of his birth parents to the Afro-American Black Panther movement, they are an allusion to Túpac Amaru II , a South American freedom fighter against the Spanish conquerors. Shakur spent most of his youth with his mother and half-sister in constantly changing accommodations in New York.

In 1986 Afeni Shakur moved with her children to Baltimore in the US state of Maryland, in a largely white, middle-class neighborhood. There Shakur attended the Baltimore School for the Arts . He took courses in literature and ballet , read a lot and acted in the theater. At the same time he started rapping. Although he was an outsider because of his social background, he later referred to the Baltimore years as the happiest of his life on many occasions; he saw himself as privileged by fate compared to the other young people in his neighborhood and recognized the importance of education. In 1988, however, his mother moved to the west coast of the United States to look for work and settled there in Marin City , California , near the city of San Francisco . With that she uprooted Shakur, who was looking for a father figure, one more time. In retrospect, Tupac himself saw the move and the associated dropping out of school as the decisive point “at which I got off the track” ( “where I got off track” ).

In the ghettos of Oakland he looked to the successful pimps and drug dealers in his neighborhood and eventually tried his own hand in the drug trade. At the same time, however, he got together with people from the music business who helped him to a loose engagement as a roadie , dancer and finally also a rapper in the rap group Digital Underground . He drew attention to himself with an appearance in the digital underground track Same Song and received his first solo record deal with Interscope Records . In 1991 Tupac Shakur released his first and most political album, 2Pacalypse Now . Two years later, Strictly 4 My NIGGAZ followed. In addition to music, Shakur appeared in a number of films, such as Poetic Justice on the side of Janet Jackson .

At that time he got into a series of violent clashes that earned him numerous legal proceedings. On the other hand, Shakur was socially committed - he judged z. B. a helpline for needy children and adolescents. He was shot in 1994 when he met Christopher Wallace , better known as "The Notorious BIG," and Sean Combs, aka "Puff Daddy," at Time Square's Quad Recording Studios in New York to record a new title. He was hit by five bullets, one of which hit him in the head. He survived the attack and charged Combs and Wallace with the assassination attempt in what became the beginning of the so-called East Coast vs. West Coast feud. In 1995 Shakur was convicted of sexual harassment . While in prison, his album Me Against the World peaked at # 1 on the Billboard charts . Of the originally planned four and a half years imprisonment, however, he only served eleven and a half months, since he was released by the head of the Death Row Records label , Suge Knight , for bail of $ 1.4 million . In prison, Shakur, who called himself Makaveli in reference to the famous Florentine state theorist of the 15th century, Niccolò Machiavelli , wrote the screenplay Live 2 Tell , which tells of the exit of a drug king.

On September 7, 1996, Shakur watched his friend Mike Tyson's boxing match against Bruce Seldon at the MGM Grand Hotel in Las Vegas with Suge Knight and several friends . When Knight and Shakur were about to leave the MGM, a loud argument broke out in the lobby with Orlando Anderson, a gang member of the Southside Crips . He and his friends had robbed a member of the Death Row entourage in a Foot Locker branch. When Knight Shakur pointed this out, this attacked Anderson and knocked him down with a punch. Then his bodyguards also started beating Anderson. After the confrontation was ended by the security guards of the hotel, Shakur and Knight were able to leave the scene undisturbed and got into their limousine.

Shortly afterwards, at a red light on the corner of East Flamingo Road and Koval Lane, shots rang out at the black BMW 750i in which the rapper was. Four projectiles hit the tires, five the passenger door and three projectiles the window panes. Shakur was hit by several bullets in the chest, pelvis and right arm, including a projectile through his right lung . The Knight sitting at the wheel of the car suffered a graze on the head, but was still able to steer the car despite his injury and tried to escape through the heavy traffic of Las Vegas with the seriously injured Shakur and his bodyguards until he was stopped by the police. The two injured were admitted to the nearby University Medical Center of Southern Nevada. Shakur had to have a lung removed; he was then placed in an artificial coma from which he could not awaken. On September 13, Shakur died in hospital at the age of 25 from his gunshot wounds.

The fact remains unsolved to this day.

Orlando Anderson, who was believed to be the prime suspect, was shot dead in Los Angeles on May 29, 1998 .

Another suspect or at least pulling the cord was Christopher Wallace ( The Notorious BIG ). The battle between 2Pac and Notorious BIG was one of the best-documented beefs in hip-hop history, which might suggest a motive. Wallace was shot dead from another car on March 9, 1997, also sitting in the car. This murder has not yet been resolved either.

In December 2016, Tupac Shakur was honored with the induction into the Rock and Roll Hall of Fame . The official event for this took place on April 7, 2017.

As with Elvis Presley , Jim Morrison and other celebrities who died a mysterious death, rumors linger that Shakur was just faking his death, which is backed up with images of lookalikes or older photos. One police officer also claimed that Shakur paid him $ 1.5 million to fake Shakur's death. These rumors were fueled by the alleged allegation by Suge Knight, "Nobody has seen Tupac dead," which Knight allegedly said in a radio interview in 2012.

The car Shakur was in when he was shot went up for sale by Moments In Time auction house for $ 1.5 million in early 2017. The BMW had been restored, only a few traces still indicated the act. The owner at this time was Nick Alexande, the vehicle had already changed hands several times. In February 2018, car dealer Celebrity Cars offered the car for a price of $ 1.5 million.

Even after Shakur's death, works and articles containing previously unpublished material continue to appear. One example is Ghetto Gospel , which was released in 2005. The song, whose chorus contains samples of Elton John's song Indian Sunset , made it to the top of the singles charts in Great Britain and Australia. 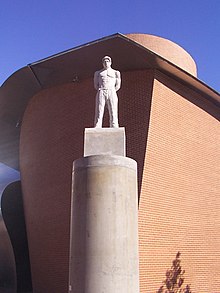 Paolo Chiasera: “Tupacproject” in front of the Marta Museum in Herford

The lyrics of Shakur's titles, for example together with the musicians Snoop Dogg , Dr. Dre and the group Outlawz , revolve around ghetto experiences (e.g. in My Block ) and racism . In doing so, he uses an explicit, sometimes violence-glorifying language. Teenage police killers said they were inspired to commit violence by his song Souljah's Story . 2Pac is politically more concrete in the song Panther Power , for example , which rejects the American Dream and uses anti-capitalist rhetoric in the style of the Black Panther left. The language, which sometimes glorifies violence, is juxtaposed with pieces with soulful texts such as Keep Ya Head Up or Dear Mama . The first song is directed against discrimination against women in general, the second is an extensive acknowledgment and is dedicated to Shakur's mother.

Since 2005 there has been a statue created by Paolo Chiasera on a column in the entrance area of ​​the MARTa Herford museum , showing the US rapper Tupac Shakur. The sculpture, which was created between 2003 and 2005, is called "Tupacproject".

In 2003 the Oscar- nominated documentary Tupac: Resurrection was released.

In April 2012, Snoop Dogg resurrected Shakur in a life-size projection at the Californian music festival Coachella with the help of an elaborate computer-aided process and presented a virtual performance in a duet with the deceased artist.

The conspiracy theory surrounding Shakur's death is the subject of the first episode of the radio play series Revelation 23 .

The Rolling Stone listed 2Pac ranked 86 of the 100 greatest players of all time .