This article deals with the Peruvian independence fighter. Information on the province of the same name can be found under Province of Condorcanqui . 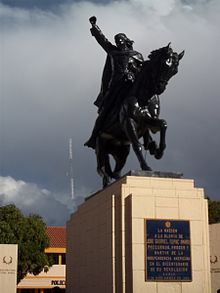 José Gabriel Tupaq Amaru or José Gabriel Condorcanqui Noguera , later known as Tupaq Amaru II ( Túpac Amaru II ; born March 19, 1738 in Tinta (today's Peru ); † May 18, 1781 in Cusco ) was the leader of an uprising against the Spaniards in 1780 . Despite the failure of the revolt, Tupaq Amaru was later glorified and became an important figure in the struggle for Peruvian independence , for various uprising movements in America and in the expropriation of the large landowners in Peru under General Juan Velasco Alvarado .

He was born as José Gabriel Condorcanqui in 1738. His mother was Rosa Noguera Valenzuela and his father was Miguel Condorcanqui . His parents died when he was twelve years old. As an orphan he was raised by an aunt and an uncle. At sixteen he received a Jesuit education at the San Francisco de Borja School. On May 25, 1758 he married Micaela Bastidas Puyucahua (born in the Abancay area ) and had three sons: Hipólito (born 1761), Mariano (born 1763) and Fernando (born 1770). There is also the story that he had offspring with Umina Berzeviczy , daughter of the Polish adventurer Sebastian Berzeviczy and an Inca princess.

As a large landowner and feudal lord, he perceived the exploitation of the indigenous population and, after unsuccessful lawsuits and lawsuits, called for an uprising against Spanish rule. He declared himself to be the heir of the Inca Empire; in memory of the last of the Inca rulers Tupaq Amaru († 1572) - from whom he claimed to be descended - he called himself Túpac Amaru II .

The uprising he led was the first serious revolt by indigenous peoples against the Spanish colonial rulers in two centuries. After the unsuccessful siege of Cusco by 17,000 troops loyal to Spain under the command of General José Antonio de Valle and the Spanish General-Visitor José Antonio de Areche , the Spaniards succeeded in capturing Tupaq Amaru II through betrayal by European comrades-in-arms. The Visitor Areche ordered to proceed against the insurgents with extreme severity: Amaru was convicted and quartered in the Plaza de Armas in Cusco , where his alleged ancestor Tupaq Amaru had already been beheaded. This was immediately preceded by the agonizing execution of his eldest son Hipólito Condorcanqui Bastidas, his wife Micaela Bastidas Puyucahua and the military leader Tomasa Tito Condemayta .

Tupaq Amaru was a Kazike , d. H. the most powerful man in his community based on the pre-colonial model. When the Spaniards wanted to finally break up the old ruling structures, he threatened to lose the title and thus the demotion from a cacique to a simple Indian. Tupaq Amaru tried to enforce his right to the title, but was unsuccessful. His involvement in the rebellion was by no means unselfish: He tried to maintain his status as a cacique. He was also indebted to the local corregidor , a kind of administrative officer of the Spanish crown. When he hanged the corregidor Arriaga in November 1780 to get rid of his debts, this sparked the start of the rebellion.

The main causes of the uprising were:

The rebellion itself can be divided into two phases: In the first phase, Condorcanqui was the leader. In the base the rebellion was indigenous, but Túpac Amaru II tried very hard to integrate other social groups of the colonial society and ultimately moved within their logic. He was supported by numerous mestizos and occasionally had Creoles and parts of the clergy at his side. The hierarchy of the rebellion clearly reflected that of colonial society: almost all of the leaders were Creoles or mestizos, only a few Indians; Blacks were completely excluded from leading participation. With this one can classify the uprising between an Indian uprising and a conflict between colony and metropolis.

In the second phase, Tupaq Katari took command after his death. Tupaq Katari had a more radical policy, which was directed against all whites, so that the mestizos and Creoles withdrew.

In general, it can be said that the Tupaq Amarus rebellion was characterized by the network of kinship, which guaranteed mutual support and loyalty. It was not the first rebellion against the Spanish colonial rulers. The rebellion under Juan Santos Atahualpa (approx. 1742–1750) lasted much longer, but did not have the same impact as the Tupaq Amarus. The advantage of the latter was that it took place in the southern Andes, where the silver mines were and which was strategically important for trade. This could seriously damage the colonial economy. One reason for the failure of the rebellions is to be seen in the fact that there was rivalry between the caciks. These conflicts between the tribal rulers already existed in pre-colonial times and then continued. The caciques split into the rebellious camp and the camp loyal to the crown. The failure to work together in the interests of the Indians ultimately led to the failure of the rebellions.

Spelling and speaking of the name