The Saxon Elector August the Strong , who was also King of Poland , held the so-called Zeithain Lustlager from May 31 to June 28 , a grandiose troop show combined with the display of royal splendor not far from the cities of Riesa and Grossenhain between the towns of Zeithain and Glaubitz and Streumen near the Saxon-Brandenburg border. In front of 48 invited European princes and their military, August presented his army in a maneuver , organized by Field Marshal Graf Wackerbarth , followed by great festivities, concluded with fireworks near Riesa. The Zeithainer Lustlager shows not only the military capabilities, but also the high level of Saxon art and culture.

The Zeithain giant stollen with the stollen knife, copper engraving by Elias Back

One of the many highlights of the festival is the presentation of a Christmas stollen weighing 1.8 tons, 18 cubits long and 8 cubits wide according to historical records , which was created by the Dresden master baker Andreas Zacharias with the help of 60 baker journeyman. For this spectacle, Oberlandbaumeister Matthäus Daniel Pöppelmann built a stove, from which the tunnel is brought to August's warehouse with the help of a cart pulled by eight horses. The large stollen knife created for this festival , a 1.6 meter long kitchen utensil made of sterling silver, is used to cut the baked goods .

At the camp there was a heated argument between the Prussian King Friedrich Wilhelm I and his son Friedrich , whereupon the latter entrusted his friend Hans Hermann von Katte to flee to France and thus to evade his father's educational powers. Katte tries to dissuade Friedrich from his plan, but then supports him in implementing it.

On August 5th, Crown Prince Friedrich was caught fleeing from his father and was imprisoned in the Küstrin fortress . His friend Hans Hermann von Katte is sentenced by a military court to life imprisonment for desertion and high treason. The Prussian King Friedrich Wilhelm I converts the sentence into the death penalty and forces his son to watch the execution of his friend on November 6th . Friedrich's page and confidante Peter Karl Christoph von Keith managed to escape to England in time with the support of the British envoy Philip Stanhope, 4th Earl of Chesterfield . He is hanged in effigy because of his involvement in Friedrich's escape plans .

Kingdom of Sardinia / Duchy of Savoy 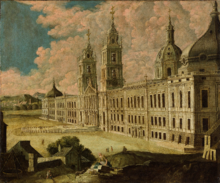 The Palácio Nacional before 1755

The first known writing of the legend

Title page of the libretto from 1730 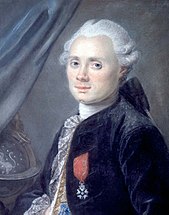 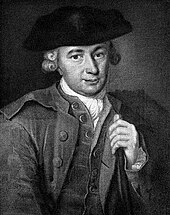