Jacob Paul Gundling , from 1724 Freiherr von Gundling (often also Jakob Paul ; born August 19, 1673 in Hersbruck ; † April 11, 1731 in Potsdam ), was a German historian , for many years at the same time court scholar and involuntary court jester in the immediate vicinity of the Prussian "Soldier King" Friedrich Wilhelm I and President of the Prussian Academy of Sciences .

Satirical portrait of Gundling and Anne de Larray. About 1725

He came from the Protestant Frankish Gundling family . His father Wolfgang Gundling , who died in 1689, was a pastor in Kirchensittenbach near Nuremberg (St. Sebald), his grandfather the poet Johannes Vogel . Shortly before his birth, the family fled temporarily to Hersbruck from marauding imperial soldiers.

Gundling attended the Pforta state school near Naumburg from 1690 to 1693 . He studied law and history at the universities of Altdorf , Helmstedt and Jena as well as in Halle and in 1699 accompanied the Nuremberg patrician Jacobus von Tetzell on trips to Holland and England. In 1705, King Friedrich I in Prussia appointed him professor of history and law at the Berlin Knight Academy and in 1706 he was appointed historian at the senior herald's office .

After the death of the king and the abolition of the knight academy, his son, the soldier king Friedrich Wilhelm I, appointed him court counselor and his newspaper advisor and historiographer in 1713 ; but the role he played at the Prussian court was more like that of a court jester , since he allowed himself to be abused too many raw jokes in the tobacco college because of his vanity in drunkenness . Under King Frederick I, the tobacco college had been a casual round of ladies, geared towards cheerful sociability and charity. His son Friedrich Wilhelm I kept the institution, but fundamentally changed its character. Now these were all men’s societies, mostly military men , who smoked, drank plenty of beer and discussed things in spartan rooms. Participants included some so-called “Funny Councilors”, scholars materially dependent on the court. They were consulted as experts, but also to excessive alcohol consumption animated and debates, which often ended for the pleasure of others present in severe blows. Gundling in particular has repeatedly been the target of selected humiliations. He had to wear a large wooden chamberlain key around his neck; he was placed in a prepared carrying chair from which the seat broke out on the way; a monkey, dressed like Gundling himself, was introduced to him as his own son, whom he had to embrace and kiss; On the way home the drunk was dropped into the frozen castle moat, where he broke in, wriggled in fear of death and was laughed at from above; once he was brought home to his bed, in which the king had put two young bears, who made him terrible. In 1716 Gundling tried to escape his misery by fleeing to his brother Nikolaus Hieronymus Gundling , professor and scholar in Halle (Saale) , but was brought back again. Unauthorized removal from the court was considered desertion.

Apparently because of the ongoing humiliation, he developed stomach ulcers, which he tried to numb by consuming more alcohol. A second escape took him to Catholic Wroclaw , where he was offered the position of tutor to Count Schaffgotsch - on the condition that he would convert to Catholicism . Gundling refused and, under pressure from the soldier king, returned to Prussia. On January 3, 1720, he married Anne de Larray, the daughter of an aristocratic Huguenot who had fled to Berlin via Holland . The court society, which Gundling's marriage probably rightly interpreted as an attempt to escape the constraints of his existence as the learned fool of the king - or at least to add a second, normal, bourgeois form of existence to the side - did everything possible to prevent the project. Satirical drawings and writings were circulated about the bride and groom , and a strong laxative should be mixed into Gundling's food before their wedding night. Gundling escaped this and other attacks planned for the wedding day by reporting sick and having the wedding carried out secretly and early.

In order to make the entire scholarly class and his institutions contemptible in the person of Gundling, the king gave him several high court and state offices, appointed him President of the Prussian Academy of Sciences and elevated him to the class of baron on September 25, 1724 . Although these honors were by no means meant to be serious, and Gundling continued to be exposed to the rough jokes at court, his titles and offices provided him with considerable income. He owned carriages and horses, had servants and could lead the life of a great gentleman. In public he used his questionably obtained titles as a matter of course, and there is evidence of a number of administrative processes connected with his offices in which he was successful. The Collegium medico-chirurgicum was founded under his presidency . In addition, he wrote and published historical and biographical texts and in-depth descriptions of the states of Brandenburg and Pomerania . This difficult to understand double existence of Gundling as a learned gentleman and a weak-willed buffoon gave rise to attempts at interpretation with very different results.

Gundling's Map of the Electorate of Brandenburg (1724)

Between 1713 and 1715 he traveled through the Mark Brandenburg to collect information for his Brandenburg Atlas and an extensive map of the Kingdom of Prussia, which he completed in 1724. After the death of his brother Nikolaus Hieronymus, he took over custody of his children, including Johann Andreas von Gundling , who was later involved in diplomatic disputes between Prussia and Stollberg.

Gundling died in Potsdam in 1731 as a result of his stomach ulcers. At the request of the king he was buried after an unworthy and, in the judgment of some contemporaries, even irreverent ceremony. For years he had had to spend the nights in his room next to a wine barrel transformed into a coffin. In this container, his body, grotesquely costumed, was first exhibited in public. The writer David Faßmann , his greatest enemy and envious at court, gave the funeral sermon - the evangelical clergy responsible had refused to attend the spectacle. Eight tailors then carried the barrel to the city limits (according to other sources the barrel was pulled by pigs), from there it went to Bornstedt near Potsdam in a cattle wagon . Gundling was buried in a crypt in the village church there. Friedrich Wilhelm I later tried to dispel the suspicion that he had disregarded the principles of religion through official descriptions of the process. The opposed clergy were strictly interrogated, but ultimately not punished.

The Jacob-of-Gundling Street in Potsdam is named after him. 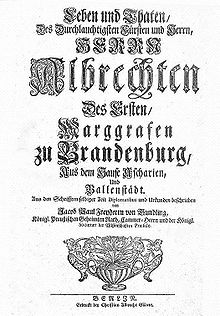 Title page of Gundling's work on Albrecht the Bear (1730)

Since then, the life and work of Gundling have been judged very differently. In most cases, he did not speak of his indisputable scientific achievements, but of his weaknesses in character and the humiliations that these - and the arbitrariness of his king - brought him at the Prussian court. For a long time the main source of these one-sided representations was a diatribe which David Faßmann had published four years after Gundling's death. Faßmann, a well-read writer at the time, had been Gundling's bitter competitor in the tobacco college for six years and after his death received all the titles and rights of the deceased. Now he tried to portray his predecessor as a baseless and foolish person who deserved all the rude jokes he had to endure.

Until about the middle of the 18th century, however, there were also more balanced judgments. Goethe's great uncle, for example, commented on Gundling: “The books he edited are all thoroughly written, but without much spirit. It therefore seems as if the king wanted to make a scholar a soldier for a spectacle ”. In the Nuremberg scholarly lexicon of 1755 it says: “... so he was a mockery of the whole court. ... In the meantime, his services to scholarship remain (= nevertheless) very great and his writings ... are considered thorough without exception ".

The further the Age of Enlightenment had advanced, the less differentiated Gundling was judged. As early as 1750, the Academy of Sciences was anxious to distance itself from its own, less glorious history under the soldier king; the person of its arbitrarily and maliciously appointed president was now only considered an unworthy example from dark, anti-spiritual times. A biography published in 1795 was content with a detailed description of Gundling's foolish, tragicomic experiences; his services as a scholar were hardly mentioned. According to the author, Friedrich Wilhelm I believed "that the sciences made his subjects too refined and softened" and therefore decided "not only to prevent them from spreading, but also to make them ridiculous". The vain and weak-willed Gundling used himself as a tool for this.

This remained the usual way of looking at things until the mid-19th century. After that, the view of Gundling changed again, in a double sense. On the one hand, liberal historians returned to the assessment from the pre-Enlightenment: Gundling's professional qualification was emphasized and it was complained that in the desolate intellectual climate during the soldier king's lifetime, "a spirit with bad intentions was destroyed by unworthy means". On the other hand, Prussian historians tried in the last third of the 19th century to retouch a historical picture in which an ancestor of the ruling Hohenzollern was responsible for the scandalous treatment of science in general and Gundlings in particular. In the end, it was found that the facts of the case "appear somewhat harmless on more thorough research" and that the poor character of the court scholar had basically caused his own fate.

Up to the present day, attempts to do justice to the historical phenomenon of Gundling have varied widely: from the almost exclusive portrayal of his vanity, his drunkenness and the resulting "funny" adventures to the source-critical, more differentiating point of view, which too his considerable scientific achievements are taken into account and the role of the king and his willing court assistants illuminated.

Gundling introduced a systematic evaluation of sources in the Prussian humanities . The Prussian school system and the mapping of Prussia were promoted by J. P. von Gundling. He also influenced the domestic and foreign policy of Friedrich Wilhelm I. His work on Albrecht the Bear , the founder of the Mark Brandenburg, contains the first known mention of the Schildhorn saga .