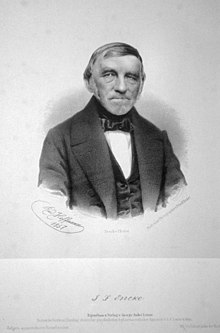 Johann Franz Encke (born September 23, 1791 in Hamburg , † August 26, 1865 in Spandau near Berlin ) was a German astronomer . Among other things, he discovered the Encke division of the Saturn ring named after him , carried out the at that time difficult orbit determinations on many comets (see also Encke's comet ) and later dealt intensively with asteroids . He also determined the solar parallax and thus the astronomical unit (distance from earth to sun) with great accuracy .

Encke, called Franz, was the eighth of nine children of the deacon of the Hamburg Jacobikirche August Johann Michael Encke and his wife Maria, geb. Misler (1755–1811), daughter of the senior secretary Johann Gottfried Misler (1720–1789). Friedrich Encke , later pastor in Eutin , and August Encke , later royal Prussian lieutenant general , were his older brothers. The father died when Franz was not yet four years old, and the family subsequently lived in poor conditions. Thanks to the financial support of a teacher, Encke was able to attend the Johanneum grammar school and later study.

Encke began studying mathematics and physics in 1811 - together with Friedrich Bernhard Gottfried Nicolai - with Carl Friedrich Gauß at the University of Göttingen . However, he interrupted it in 1813 and went to the military, as he wanted to participate as a patriot in the liberation of Germany from Napoleonic troops. After the liberation of Hamburg in the same year, he joined the Hanseatic Legion and served as a sergeant in the artillery in Holstein and Mecklenburg . In autumn 1814 he resumed his studies in Göttingen. The return of Napoleon from exile on Elba and the mobilization of the French troops prompted Encke to join the military again. In 1815 he finished his service as a lieutenant and returned to Göttingen.

During his military service Encke met the astronomer and statesman Bernhard von Lindenau , the director of the Gotha observatory . Lindenau got Encke a position as adjunct at the observatory, which he took up in 1816. In 1820 Encke became vice director and when Lindenau completely returned to politics in 1822, he took over his position. During this time Encke completed his work on the Venus transit of 1761 and 1769, from which he derived the parallax of the sun . He calculated the orbits of several comets, u. a. the Great Comet of 1680 and the short-period Encke Comet named after it . In the evaluation of observational data, he applied the method of least squares in order statistical minimize errors.

In 1823 he married Amalie Becker, the daughter of the bookseller and publisher Rudolph Zacharias Becker , editor of the German National Newspaper and publisher of the Seeberg Observatory's publications . With her he had three sons and two daughters.

Honorary grave in the cemetery II of the Jerusalem and New Church Congregation Section 2, G2

He was in charge of the production of the star map series at the Berlin Academy from 1825 to 1859 and published the Astronomical Yearbook from 1827 to 1863.

In 1844 Encke was appointed professor of astronomy at the Friedrich-Wilhelms-Universität zu Berlin . His students included u. a. the later professors Wilhelm Foerster and Franz Brünnow .

In 1837 he discovered a 325 km wide division in the rings of Saturn , which is now called the Encke division .

Encke turned to the problem of determining the orbit of asteroids . Due to the gravitational effect of larger celestial bodies, larger orbital disturbances sometimes occur . Encke applied infinitesimal calculus to the problem and in 1849 presented a method according to which the orbital elements of a celestial body can be determined on the basis of just three observations.

In July 1826, Encke joined the Monday Club in Berlin and was immediately elected archivist. From 1858 he was a senior at the Monday Club. He held this office until 1864 when he retired from public life.

In 1859 Encke suffered a stroke , the consequences of which he suffered for the rest of his life. In 1864 he asked for release from his offices and withdrew from public life. He died on August 26, 1865 in Spandau. His successor was Wilhelm Julius Foerster . 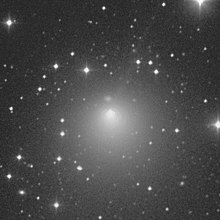 Encke has received numerous honors and awards for his achievements. He received the gold medal of the Royal Astronomical Society twice (1824 and 1830) . In 1828 the Royal Society awarded him the Royal Medal . In 1842 he was accepted into the Prussian Order Pour le Mérite for Science and Art and in 1853 into the Bavarian Maximilian Order for Science and Art . On December 19, 1825 he became a corresponding member of the Académie des sciences . In 1830 he was elected to the Göttingen Academy of Sciences , 1839 to the American Philosophical Society , 1841 to the Royal Society of Edinburgh , 1849 to the American Academy of Arts and Sciences , 1852 to the Bavarian Academy of Sciences and in 1858 a member of the Leopoldina .

In his memory, in addition to the Encke division and the Encke comet, the lunar crater Encke , the asteroid (9134) Encke , Enckestrasse in Gotha , Berlin Enckestrasse , where the Berlin observatory was located, and Enckeplatz in Hamburg.

His grave is dedicated to the city of Berlin as an honorary grave .