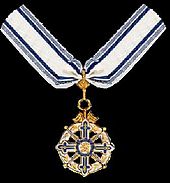 The Bavarian Maximilian Order for Science and Art , the counterpart to the Prussian Order Pour le Mérite for Sciences and Arts , founded in 1842 , is today the highest award of the Free State of Bavaria and was founded on November 28, 1853 by King Maximilian II of Bavaria . By 1932 the medal had been awarded a total of 351 times. There was no award between 1932 and 1979. In 1980 the high honor was reintroduced by the then Prime Minister Franz Josef Strauss, encouraged by the then Minister of Education and Cultural Affairs, Hans Maier , and was first awarded again in 1981. Since its reintroduction, the Maximilian Order has been awarded to 222 personalities, including 36 women. The number of living medal bearers should not exceed 100. After the award ceremony in 2018, the number of living order bearers is 95 personalities.

Since its establishment, the Bavarian Maximilian Order has not only been understood as a visible distinction, but also as a religious community in which the scientific and artistic members meet to exchange ideas. Such encounters, combined with lectures and discussions, take place annually.

In continuation of the old Bavarian tradition, the Bavarian Maximilian Order for Science and Art is created. It is intended to honor outstanding achievements in the fields of science and art.

Two words appear in this article: religious community and religious council. To make it clear what these actually are, a brief explanation follows:

The Maximilian Order should preferably be awarded to German scientists and artists, so it is not limited to citizens of the Free State of Bavaria . Its foundation took place in one stage in two departments for art and science , with a men's and women's version. The number of order holders is limited to 100 living holders, whereby the number can be supplemented accordingly due to death or other reasons (e.g. withdrawal).

Appearance, texture and way of wearing

The medal consists of a blue enamelled Gothic cross with a white border and four rays in the corners, surrounded by a white gold-braided ring. The center of the cross is formed by a round medallion with gold borders, which shows the upright Bavarian lion in the center on a white background, which is also surrounded by the golden inscription: For science and art . The reverse shows the Bavarian diamond coat of arms. On a cross arm, there was also - in earlier copies - the date of the foundation , November 28, 1853 . The medal is worn as a collar medal on a white ribbon with a blue border, where a square miniature, a blue and white rosette or a fraquette on the left lapel can be worn.

Authority to award and propose

Composition of the Order Advisory Council

The order council consists of:

The statute of the order of the Bavarian Maximilian Order for Science and Art further specifies the award moonalities and the activities of the order advisory board. The following is regulated in extracts:

The proposals which should lead to the award of the order are to be forwarded to the State Chancellery. The proposals must contain the following information:

The proposals developed by the two departments (i.e. art and science) require the approval of the majority of the order holders present in the respective department. Following the vote, the state chancellery then presents the result with a statement to the order's advisory board.

Withdrawal of the order

The Maximiliansorden is stripped to the proposal of the Religious Advisory Council, when because of the owner:

It can be revoked if the holder:

In such cases, the revocation is then pronounced by the Prime Minister. The order cross must then be returned to the State Chancellery with the award certificate.

Archiving of the award dates

The Bavarian State Chancellery is responsible for keeping the dates of awarding the Maximilian Order. It maintains a register of the order , which contains all the people who have been awarded the order. In this matriculation all data regarding name, address and date of award, together with the documents of the borrower, are archived. Finally, the number of members of the religious order (number of carriers) is specified. So people who have reached the age of 85 are no longer listed in the group of "entrusted", although they expressly retain their status or rights in the religious community (number of members).

Bearer of the Maximilian Order