from Wikipedia, the free encyclopedia
This is the spotted version , flagged on April 13, 2020 . There is 1 pending change that has yet to be viewed.

This article deals with the ancient historian and classical archaeologist. For the Romanist of the same name, his grandson, see Ernst Robert Curtius .

Curtius was the son of Carl Georg Curtius (1771-1857) and his wife Dorothea Plessing. His brothers were the future pastor and theologian Paul Curtius (1808–1833), the Lübeck mayor Theodor Curtius (1811–1889) and the philologist and linguist Georg Curtius (1820–1885). The later Romanist Ernst Robert Curtius was his grandson.

Curtius attended school at the Katharineum in Lübeck . There he made friends with the later writer Emanuel Geibel . After graduating from high school in Easter 1833, Curtius began to study philosophy with Friedrich Gottlieb Welcker (classical studies) and with Christian August Brandis in Bonn . In autumn 1834 Curtius moved to Göttingen to join Karl Otfried Müller . With his overall picture of the cultural history of classical antiquity, Müller set the trend for Curtius.

From autumn 1835 Curtius worked for August Böckh at the University of Berlin . In 1837 Curtius was hired by his teacher Brandis to Athens . Curtius earned his living there as a tutor for the children of Brandis, including Dietrich Brandis . In this house he later made the acquaintance of Ludwig Ross , Heinrich Nikolaus Ulrichs and Eduard Gerhard .

From there Curtius undertook several trips through Greece and Italy with the geographer Carl Ritter . In 1838 he met again with Emanuel Geibel, who was also traveling to Greece at the same time. Together with Geibel, he tried to adapt various classical Greek writers. He traveled to the Peloponnese again with his teacher Müller , and when Müller died on this trip, he took him to Athens and buried him there at the Colonos .

At the turn of the year 1840/41 Curtius returned to Berlin and received his doctorate in December 1841 with Moritz Hermann Eduard Meier in Halle with the dissertation Commentatio de portubus Athenarum . After a trial period at the French and Joachimsthal Schools, Curtius completed his habilitation with Anecdota Delphica on inscriptions from Delphi (he began this work with Karl Otfried Müller). In the autumn of 1844 Curtius was appointed praeceptor (private tutor) of Prince Friedrich Wilhelm, who later became Emperor Friedrich III. ; at the same time he was promoted to associate professor at the University of Berlin .

In 1850 Curtius married Auguste Besser, the widow of the bookseller Wilhelm Besser, in Berlin . With her he had the son Friedrich Curtius . On January 10, 1852, Curtius gave a famous lecture in the Sing-Akademie zu Berlin about Olympia and actually initiated the first archaeological excavations at this location. In November of that year he was accepted as a full member of the Royal Academy of Sciences in Berlin. When his wife died after a year of marriage, Curtius married Clara Reichhelm in 1853. With her he had the daughter Dora, who later married the geologist Richard Lepsius . In 1853 Curtius joined the Lawless Society in Berlin .

Between 1855 and 1867 Curtius worked as a professor at the Georg August University in Göttingen . When Eduard Gerhard died in Berlin in 1867 , Curtius was entrusted with a professorship in archeology as his successor. At the same time , he was in charge of the Antiquarium in the Altes Museum . In 1871 he became secretary of the academy's philosophical-historical class, which he remained until 1893. Due to his significant preparatory work, after the end of the war in 1871, the “private” archaeological institute was converted into a Prussian state institution, and in 1874 into a Reich institute. At the same time, the Reichstag decided to set up a department of this institute in Athens.

In 1875, under Curtius' direction, excavations began in Olympia, during which a Hermes by Praxiteles and many other sculptures were found. In addition to a few scientists, Curtius was supported by the architects Friedrich Adler and Wilhelm Dörpfeld . Curtius' collaboration with Johann August Kaupert also resulted from this work . In 1876 he was elected to the American Academy of Arts and Sciences , in 1895 to the American Philosophical Society and in 1889 to the Royal Society of Edinburgh . For his scientific achievements, he was accepted on May 31, 1879 in the Prussian order Pour le Mérite for science and the arts . 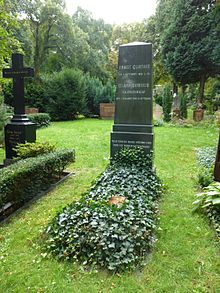 Gravesite of Ernst and Clara Curtius in the old St.-Matthäus-Kirchhof in Berlin

Ernst Curtius died in Berlin on July 11, 1896 at the age of 82. He was buried in the Old St. Matthew Cemetery in Berlin-Schöneberg, Großgörschenstraße 12-14.

Incomplete list Curtius was an honorary member of the Berlin Association in the Association of German Student Associations . His grave has been dedicated to the city of Berlin as an honorary grave since 1958. In Berlin-Lichterfelde a street was named after him during his lifetime (1895), which branches off from Drakestraße today.

See also : List of Classical Philologists at the Georg-August University of Göttingen
Holder of the chairs for Classical Archeology at the Friedrich-Wilhelms-Universität zu Berlin

Directors of the Berlin Collection of Antiquities