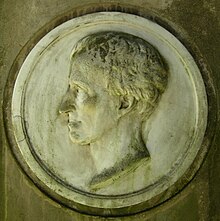 Robert Cauer the Elder : Welcker's grave medallion in the old cemetery in Bonn

Welcker was one of 17 children of pastor Heinrich Friedrich Welcker and his wife Johannette geb. Strack. His younger brother Carl Theodor Welcker was a famous constitutional lawyer.

Welcker studied classical philology at the University of Giessen from 1801, where he joined the Corps Lahnania in 1801. In 1803 he became a teacher at the pedagogy, a preliminary stage of the university, and in 1804 a private lecturer. In 1806 he traveled to Italy and was a tutor in the family of Wilhelm von Humboldt , whose friend he became and with whom he corresponded. In 1809 he became professor of Greek literature and archeology in Giessen on the recommendation of Humboldt. This is the first indication of the university subject archeology in Germany. In 1812 he founded the (Classical) Philological Seminar, which became the core of high school teacher training.

Welcker campaigned passionately for the fight against the "tyrant" Napoleon and was increasingly popular among students. He was in contrast to many other professors such as the cameraist August Friedrich Wilhelm Crome , who was an admirer of Napoleon. Since the turn of the year 1813/14 there was a political secret society in the Gießen / Mainz / Heidelberg area based on the model of the Masonic lodges (mostly named after the most important members Hoffmann-Snell-Gruner-Bund), which aimed for a unified Germany under Prussian leadership. This included the Welcker brothers and the Giessen student Wilhelm Snell . In 1814 Welcker took part in the Wars of Liberation with over 100 students from Giessen as a volunteer in a hunter battalion .

After his discharge from the Hessian civil service (in September 1816) he went to the University of Göttingen , where he was appointed full professor of Greek literature and archeology on October 3, 1816. In 1817 he was elected a full member of the Royal Society of Sciences . But barely two years later, on February 2, 1819, Welcker moved to the University of Bonn , where he worked as a personal professor of philology and archeology as well as director of the university library and director of the art museum . In 1837/38 he was the rector of the university.

Because of his liberal outlook, Welcker was arrested during the demagogue persecution after the Karlsbad resolutions .

In Bonn, in the later parliamentary and government district, a street was named in Welcker's honor; for decades the press and information office of the federal government was located there. The city of Giessen honored him with the Welckerstrasse named after him.

On October 27, 1835, Karl Marx and Emanuel Geibel enrolled in his lecture “Greek and Roman doctrine of gods”.

See also : List of Classical Philologists at the Georg-August University of Göttingen