The University and State Library Bonn (ULB Bonn) is the central university and archive library of the Rheinische Friedrich-Wilhelms-Universität Bonn . The university and state library is divided into a main library on Adenauerallee ( Südstadt , ) and a departmental library for the fields of medicine , natural sciences and agriculture in Nussallee ( Poppelsdorf , ). Taken together, the inventory is over two million volumes of books and magazines. Furthermore, numerous institute libraries of various sizes are assigned to the ULB. Part of the main library holdings have been moved to an alternate storage facility in Castell . 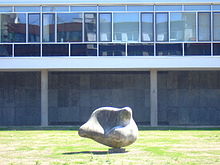 The University Library of Bonn - like the University of Bonn - goes back to a Prussian foundation in 1818. It was based in the former electoral palace , the main building of the university. At that time, Bonn did not have any previous library facilities. At that time, the basis of the library was made up of around 6,000 volumes from the closed Duisburg University Library as well as some acquired private libraries . Under the direction of the first senior librarian Friedrich Gottlieb Welcker , who was in office from 1819 to 1854, the holdings grew rapidly. When Friedrich Ritschl became his successor, the library contained more than 115,000 volumes.

Under Wilhelm Erman (1901–1920) important reforms of the library organization were made. So he introduced individual signatures and created an alphabetical card catalog, which for the first time included all inventory groups and was organized according to the Prussian instructions.

By the 1940s, the collection grew to over 600,000 volumes. During a devastating bomb attack on October 18, 1944, almost 200,000 volumes were destroyed. Above all, those departments were affected by the losses which were not believed to be able to do without even in the sixth year of the war and which had therefore not been outsourced. Only the alphabetical catalog of the library's working tools has survived.

The post-war years under the director Karl Lelbach (1946–1951) were characterized by the repatriation of the stocks that had been outsourced to various locations and the resumption of library operations, initially in temporary premises in the agricultural faculty in Poppelsdorf, then in the main university building and in the former bank opposite Schaaffhausen. Lelbach made important library decisions, such as the listing of new entries according to the numerus currens and the creation of new subject catalogs.

In the following years, large increases in the population were recorded, also through reconstruction funds and gifts. Between 1949 and 1960, 230,000 volumes were acquired that could only be insufficiently stored in unsuitable storage rooms.

Under Viktor Burr (1951–1968) the long sought-after independent library building was realized on Adenauerallee. The new building designed by Fritz Bornemann with the participation of Pierre Vago was occupied in October 1960. The building is characterized by a clear structure and transparency. The large reading room with a view of the Rhine is particularly attractive. The architectural style is reminiscent of the Villa Savoye in Poissy . The design of the gardens was in the hands of Heinrich Raderschall . Since 2000, the building stands as a monument under monument protection ; Between 1999 and 2008 it was extensively renovated and an underground storage facility was added.

Senior librarians and directors of the Bonn University Library:

From the end of the 19th century independent libraries developed from the initially insignificant book collections of the institutes and seminars, which primarily served the research interests of the professors. The number of decentralized libraries and their holdings grew continuously. At the end of the 20th century there were 160 institutions of various sizes, which together comprised 3.7 million volumes.

As a result of several projects for the spatial and organizational integration of smaller libraries and for the dissolution of dispensable facilities, the number of locations could be reduced to 56, whose holdings - with the exception of small remnants - are recorded in the university's electronic catalog. Licensing of electronic content and magazine management are central tasks of the ULB. Via campus licenses, the members of the university have access to around 25,000 electronic journals and a steadily growing number of e-books.

The ULB acquires literature primarily for researchers, lecturers and students at the University of Bonn, but also performs supraregional tasks. The annual access is around 30,000 volumes.

Despite the considerable losses in the Second World War, the ULB Bonn owns around 190,000 works that were published before 1850, including 1312 incunabula and around 50,000 works from the period 1501 to 1799. Among the collections, the libraries of Prince Georg von Prussia des Legal scholar Karl Friedrich von Savigny , the orientalist Heinrich Goussen and the sociologist and politician Ralf Dahrendorf .

Today legacies are the main focus of handwritten materials. The ULB owns 109 full and partial estates, in particular from scientists from Bonn University. Among the most important and heavily used estates are those of the Romanist Ernst Robert Curtius , the mathematician Felix Hausdorff and the philosopher Erich Rothacker .

A cabinet order from King Friedrich Wilhelm III. on December 28, 1824, the University Library of Bonn made it a deposit copy library for the Prussian Rhine Province. Since then she has been collecting and documenting the publications of the Rhenish publishing book trade. As early as 1821, the Prussian Ministry of the Interior had ordered the collection of official communications from the Rhenish government districts. Both orders form the basis of a collection that today comprises 570,000 volumes. The catchment area originally encompassing the entire Prussian Rhine Province was reduced in 1946 to the Rhenish part of the newly created state of North Rhine-Westphalia. With the Legal Deposit Act of 1993, Bonn University Library was given the title "University and State Library" and since then has only been geographically responsible for the Cologne administrative district. The amendment of the Legal Deposit Act of January 29, 2013 brought about the expansion of the collection order to include electronic online publications.

The special consideration given to Romance literature in acquisitions, also through exchange relationships with French universities, goes back to the 19th century. When the German Research Foundation (DFG) set up the system of special collection areas in 1949 , Bonn University Library was therefore responsible for general Romance studies as well as French and Italian language and literature. With funding from the DFG, the ULB has built up a special collection of more than 250,000 volumes to date, which it makes available to researchers in Germany as part of the supraregional literature supply.

Since 2016, the ULB has been developing the Romance Studies specialist information service in cooperation with the Hamburg State and University Library. In addition to the provision of analog and digital media and their in-depth indexing of content, special services are being developed for scientists, such as advice and support for handling research data and for publishing in Open Access.

Since 2009, the ULB Bonn has been digitizing copyright-free collections and individual works from its own holdings in order to make them easily accessible to all interested parties and to enable new research approaches. Works with a connection to the University and the Bonn region are primarily considered. The digitization of Rhenish newspapers is a particular focus.

The university and state library has special old works: