Former electoral palace , today the seat of the University of Bonn 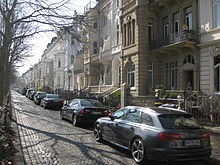 Poppelsdorf is a district of the federal city of Bonn in the city district of the same name . It is strongly influenced by the Rheinische Friedrich-Wilhelms-Universität Bonn .

The north of the district includes the university buildings, in the west their test fields form an open area. The Poppelsdorf center with shops and bars is located on Clemens-August- Strasse in the south-west.

Until the end of the 18th century, Poppelsdorf belonged to the Oberamt Bonn in the Electorate of Cologne and gave its name to the glory Poppelsdorf (also known as Endenich ), which was owned by the Cassius Foundation in Bonn . The rule comprised the towns of Endenich, Ippendorf and Poppelsdorf. After the area on the left bank of the Rhine became part of France , Poppelsdorf became the seat of a Mairie that belonged to the canton Bonn external in the Arrondissement de Bonn of the Rhine-Moselle department . Based on the resolutions at the Congress of Vienna in 1815, the Rhineland was assigned to the Kingdom of Prussia . Under the Prussian administration, Poppelsdorf became the seat of the Poppelsdorf mayor in the district of Bonn in the administrative district of Cologne in 1816 . This mayor's office existed until 1904, when the municipality of Poppelsdorf was incorporated into the city of Bonn together with the municipalities of Dottendorf, Endenich and Kessenich. The Poppelsdorf district within the boundaries of the former community still exists today.

In 1755 an electoral porcelain factory was founded, from which the porcelain and earthenware factory Ludwig Wessel (remained in the village until 1969) and the earthenware factory Franz Anton Mehlem (soon moved to the Rhine) emerged. It also had beautiful country houses and a garrison since 1885 (an infantry battalion No. 28).

For ninety years (1883–1973) the office supplies manufacturer Soennecken shaped the quarter; during the 1920s the company employed around 1000 people.

The former pleasure palace Clemensruhe of Elector Clemens August I of Bavaria at the end of Poppelsdorfer Allee was built by the Prussian King Friedrich Wilhelm III. left to the university . It now houses institutes specializing in biology and the mineralogical-petrological institute and museum. In the neighboring Botanical Garden , one of the oldest gardens in Germany, the beginnings of which date back to the 16th century, sensational specimens of the titan arum (Latin: Amorphophallus titanum ) have grown again and again in recent years .

There are numerous university institute buildings on Meckenheimer Allee and Nussallee, some dating from the 19th century. The largest of these is the Old Chemical Institute .

In Poppelsdorf and especially in the neighboring districts of Südstadt and Weststadt there are still many residential buildings from the Wilhelminian era (approx. 1840 to 1873) and historicism (approx. 1870s to 1910s) - the closer to the castle, the older the houses - in some cases excellently preserved and renovated facades. The house at Poppelsdorfer Allee 108 houses the Pfennigsdorf Foundation; events such as B. concerts take place and it can be viewed after registration. The house at Clemens-August-Straße 13 is Poppelsdorf's last residential building from the baroque period, the electoral “water carrier house” . The subsequent use of the high-rise bunker Trierer Straße 24 , which today serves as the base of a semi-detached house, is interesting .

The Poppelsdorf cemetery, founded in 1800 on the slope of the Kreuzberg, is one of the oldest cemeteries in Bonn and is home to a large number of well-known and interesting tombs.

The fictional radio character "Peter Gedöns from Bonn", who regularly calls presenter Sascha Zeus on SWR3 and gets on the nerves with his exhausting manner, lives in Bonn-Poppelsdorf.

City districts and districts of the federal city of Bonn