Draft of the Cologne city forest by Adolf Kowallek in 1895

Gottfried Raaff (born March 1750 in Poppelsdorf near Bonn ; † August 6, 1851 there ) was a German horticultural artist .

Gottfried Raaff was taken into service by the electoral gardener of Poppelsdorf Palace and trained in gardening. He received practical training in summer and reading and writing in winter. His teacher also taught him drawing, so that he could draw the layout of a garden on paper and he learned how to distinguish and classify the various plants and plants. After a few years he served as an assistant to the head gardener in the area of ​​the electoral gardens.

Drachenstein Park with a view of the Drachenfels 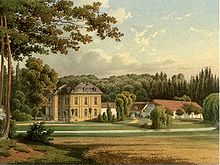 Because he wanted to put his own ideas into practice, he worked for several wealthy landlords, most recently in the service of the Cologne banker Abraham Schaaffhausen , who owned several important goods and had acquired some castles whose parks were dilapidated or out of date.

Gottfried Raaff created the facilities in Blittersdorf near Mehlem (today: Drachenstein Park) and the gardens and parks near the Kitschburg, from which Adolf Kowallek later designed today's Cologne city forest . The garden in Blittersdorf was laid out in such a way that the landscape garden directs the view of the panorama of the Siebengebirge and lies in the eye-catcher of the Drachenfels on the opposite side of the Rhine .

Abraham Schaaffhausen acquired Morsbroich Castle in 1817/1818 and Gottfried Raaff supervised the creation and design of the associated castle park.

Gottfried Raaff was married to a woman from Poppelsdorf, they had three sons together, one of whom survived him.

His obituary was written by the local writer Wilhelm von Waldbrühl .