This article covers the Bonn district. For the district of Bad Honnef see Beuel (Bad Honnef) . For the German politician see Friedrich Beuel .

Aerial view of Beuel, seen from the Rhine 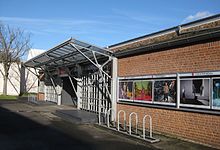 Beuel is one of the four districts of the federal city of Bonn . It includes all parts of Bonn on the right bank of the Rhine . The former rural community Beuel had from 1952 until its incorporation into the city of Bonn on August 1, 1969 town charter .

Beuel is on the right side of the Rhine . To the north it borders the Sieg estuary, Niederkassel and Troisdorf , to the east to Sankt Augustin and to the south to Königswinter . In the south of the district lies the Ennert ridge , the northernmost foothills of the Siebengebirge .

The most important cultural institutions in Beuel that are well known beyond the region are the cultural center Brotfabrik Bonn and the children's and youth theater Junge Theater Bonn in Hermannstrasse. There is also the Neue Film-Bühne cinema in the Beueler Zentrum on Friedrich-Breuer-Strasse . Beuel is the Halle Beuel in Siegenburgerstrasse and location of venues of Theater Bonn and since October 2016, the former home of the Bonn Center resident Pantheon Theater .

Beuel has a local history that can be traced back to the Middle Ages . However, the area was also inhabited earlier: graves from the 7th century BC. BC, traces of settlement in Geislar, Neu-Vilich and Vilich-Müldorf from the 5th century BC. BC, an extensive settlement from the Merovingian period between Vilich-Müldorf and Bechlinghoven, over 600 Merovingian graves in Ramersdorf (Bonner Bogen) and others.

Beuel was first mentioned in 1139 as Buiela ; other names in the eventful history are Buele and Buwele . The name is derived from the Middle High German Buehel or Old High German buhil meaning "hill" or "increase" (see. Today Upper German Buehel or Buhl for "Hill"). This indicates that the village of Beuel was built on a hill between several silted up arms of the Rhine. One of the first mentions of Beuel is in connection with a donation (donation) from Emperor Friedrich I on September 17, 1156. This concerned the possession of the Rheindorfer Hof with three vineyards.

Politically, the area had been divided since the 15th century: Schwarzrheindorf and Vilich formed a bridgehead on the right bank of the Rhine for the Electorate of Cologne , while the other places belonged to the Duchy of Berg and thus to the Office of Löwenburg . The border ran at the height of today's Kennedy Bridge .

Towards the end of the 16th century, during the Truchsessian War , a fortification, the so-called Beueler Schanze , was built in Beuel . It was in Combahn , across from the city ​​of Bonn . This hill was razed by the Spaniards in 1590 and repaired with the simplest of means during the siege by Dutch and imperial troops in 1672/1673. In the course of the Spanish War of Succession , Beuel was expanded into a fortress for the third and last time. This fortress was demolished in 1717 following a resolution of the Utrecht Peace Treaty .

1802 ends the sovereignty of the electorate of Cologne over the glory of Vilich and Schwarzrheindorf, the so-called Amt Vilich was transferred to the prince of Nassau-Usingen . In 1806 he transferred the office to the Duchy of Berg. Thus, the area of ​​today's city district (with the exception of Oberkassel , which still belongs to the Siegkreis and Holzlar , which still belongs to the Menden district) came under a single political sovereignty for the first time since the Carolingian era . Under Napoleon in 1808 the office of Vilich became Mairie Vilich. Leonhard Stroof was appointed as the first mayor ( Maire ) in 1809, who accompanied Napoleon on November 6, 1811 on the Finkenberg , where Napoleon decided against a military fortification of Bonn and its surrounding area.

The replacement of the Franco-Bergisch municipal constitution by the Prussian municipal code in 1845 led to the fact that the Mairie became the municipality of Vilich.

Even after the death of Mayor Stroof, who carried out his office in his house , the municipal administration remained in Vilich, namely in the local Eschenhof (Schillerstraße 12). It was not until December 15, 1891, that the municipal council decided to move the administration to Beuel. The new town hall (today's Rathausstraße / Friedrich-Breuer-Straße) was occupied on September 26, 1896; However, the municipality kept the name "Mayor Vilich zu Beuel" until 1921. 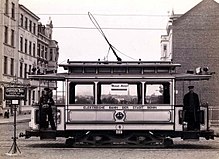 In 1902, the “Electric” ran between Beuel and Bonn

With the new Rhine bridge, which was inaugurated on December 17, 1898 after a three-year construction period, the Beueler had to undertake some modernizations:

During this time there were also cultural changes; for example, on November 11, 1912, the new Martins custom was introduced. For the first time St. Martin led a parade of children on a horse.

On February 8, 1914, the skeletons of the " Oberkassel people " from the Stone Age were found in an Oberkassel quarry .

After the First World War, Beuel was occupied by the Canadian military and then from 1920 to 1926 by the French military . The troop withdrawal dragged on until 1930.

As in all of Germany, the democratically elected local councils in Beuel were dissolved on February 4, 1933 after the so-called takeover of power by the National Socialists . In the new election, the NSDAP received a parliamentary majority thanks to the support of smaller parties. The mayor Otto Schöttler, who was in office at the time, allegedly resigned for health reasons and was replaced by a National Socialist.

There were notable successes in sport during this period; So in 1936 the Beuel stadium was inaugurated with a game between SV Beuel 06 and Schalke 04 . The game ended 2-2. In the same year, SV was Gaumeister in the Gauliga Mittelrhein , the highest football class.

The outbreak of the Second World War changed the everyday life of the population at first gradually and then massively. The first aerial bombs fell on Beuel on May 25 and 26, 1940. The area around the Beuel bridgehead was also badly hit in the most momentous air raid on Bonn on October 18, 1944. In March 1945 the German troops also withdrew in Beuel; on their retreat, the Rhine bridge was blown up on March 8, 1945. On March 19, 1945, the American 78th Infantry Division reached the community of Beuel.

The post-war period was marked by reconstruction and economic miracles . But traditional events were also revived, for example the first Pützchen market after the war took place in 1948 . One year later, on February 24, 1949, the 125th anniversary of the Beueler Weiberfastnacht took place. In the anniversary year, the power of the keys was handed over to the women's committee founded in 1824 for the first time; this was the hour of birth of the storming of the town hall, which is still practiced today . Almost ten years later, in 1958, a washer princess was elected for the first time ; their reign begins on Weiberfastnacht with a parade through the city and the subsequent storming of the town hall. With these post-war changes, the traditional Beuel Carnival was created in its current form.

On August 24, 1952, the Municipality Beuel were, following a decision by the North Rhine-Westphalian state government , the city rights awarded. The first mayor of the new city was Rudolf Holstein .

In June 1969, two months before the law on the municipal reorganization of the Bonn area came into force, the town twinning between the towns of Beuel and Mirecourt was founded. With the law, the previously independent cities of Bonn , Bad Godesberg and Beuel as well as the Duisdorf office with its associated municipalities, the Oberkassel municipality belonging to the Oberkassel office , the Holzlar municipality belonging to the Menden office (with the districts Gielgen , Heidebergen , Holzlar , Kohlkaul and Roleber ) and the districts of Hoholz and Ungarten, which belong to the municipality of Stieldorf in the Oberpleis district, have merged to form the independent city of Bonn. The right bank districts since form the district city of Bonn, with an area of 32.8 square kilometers and at that time 51,104 inhabitants. With this incorporation, what had been tried again and again since 1900 was implemented: On June 22, 1900, the entire municipality of Vilich / Beuel decided to incorporate it into Bonn; however, this was rejected by the city of Bonn. Between 1918 and 1920 another attempt to incorporate was started; this time the initiative came from the city of Bonn. The negotiations failed. Another attempt was made in 1928, again on Bonn's initiative, and again the negotiations failed.

Due to the regional reform , the city of Bonn received a new coat of arms in 1971; the Beuel coat of arms was then only of historical significance. Another consequence of the incorporation was the first extensive renaming of the streets in 1972, which was carried out in all city districts.

Furthermore, between October 2005 and mid-2011, the flood protection on the Beueler Rheinuferpromenade was renewed or improved over a length of approx. 15 kilometers. In the course of this work, the promenade between the Kennedy Bridge and Ernst-Moritz-Arndt-Straße was also renovated.

In 2006 a new police headquarters for Bonn was set up in the Ramersdorf district , and the Bonn police moved into it in October 2006 .

The 19 seats of the district council are divided as follows:

The CDU, SPD and FDP have signed a coalition agreement for the 2014 to 2020 electoral period. District mayor Guido Déus (CDU) was elected for the first time at the constituent meeting of the Beuel district council in June 2014. 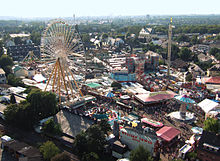 Beuel is one of the historical cradles of the Rhenish Carnival with the strongholds of Cologne , Düsseldorf and Mainz , because the Weiberfastnacht originated there in 1824 . On the morning of Weiberfastnacht, the Thursday before Rose Monday , the traditional storming of the Beuel town hall takes place. At this event, the city fathers try every year and in vain to protect the key of the city from the storming Beuel laundresses and the Beuel washer princess .

The five-day Pützchens Markt takes place on the second weekend in September . With 1.2 million visitors over five days, it is one of the largest fair events in Germany.

Exhibitions on the history and customs of the city district can be found in the Beuel local history museum .

Beuel has international restaurants , branches of various financial institutions , an indoor swimming pool with a sauna , extensive green areas and more than a dozen sports fields with (artificial) grass or ash covering.

Since 2003, extensive public investment measures have been carried out in road construction, in the renovation of old buildings and in local public transport (ÖPNV). Numerous trading and service companies , especially from the media and health sector, have since relocated to Beuel and the neighboring districts on the right bank of the Rhine.

Beuel is connected to the right-hand Rhine route with the Bonn-Beuel train station . The connection to the center of Bonn is ensured via the Kennedy Bridge with the tram line 62 ( Siebengebirgsbahn ) and the light rail line 66/67 ( Siegburger Bahn ), the latter also connects Beuel with the Siegburg / Bonn train station . Various bus routes open up the settlement area, while the industrial areas of Beuels were accessed via the Beuel industrial railway.

The right Rhine route between Troisdorf and Bonn-Oberkassel has been expanded since 2016 . From 2026 Beuel will be connected to Cologne / Bonn Airport with the S13 line of the Cologne S-Bahn every 20 minutes . In addition, two new stops will be built in the area of ​​the city district: Bonn-Vilich and Bonn-Ramersdorf.

There are the following secondary schools in the municipality (from grade 5):

City districts and districts of the federal city of Bonn