This article describes the federal highway 42 in Germany. For the street of the same name in Austria see Haager Straße . 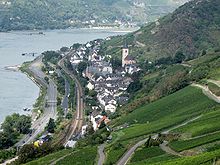 The federal highway 42 (abbreviation: B 42 ) leads from Bonn to Darmstadt .

The B 42 emerges from the federal motorway 59 at the Bonn-Ost motorway junction . From here it opens up the Middle Rhine Valley on the right bank of the Rhine via Lahnstein and Rüdesheim to Wiesbaden . Especially on the steep banks of the Upper Middle Rhine Valley and in the Rheingau, it runs directly near the banks of the Rhine and is threatened by flooding during floods. Its counterpart on the left bank of the Rhine is Bundesstraße 9 .

From Wiesbaden to the Büttelborn motorway junction , the B 42 was replaced by the 66 , 671 , 60 and 67 motorways and the B 44 . From there, the route runs again under the name B 42 to the western city limits of Darmstadt . The remaining section from there to the city center has been replaced by the new route of the B 3 .

Rhine floods and major events such as Tal Total or Rhine in Flames result in road closures of different lengths with large-scale diversions, partly through vineyard paths and high-altitude communities. In the extreme case, the places in the upper Mittelrheintal rechtsrheinisch only between Wiesbaden and Lahnstein are on the Taunus extending Bundesstrasse 260 achievable. 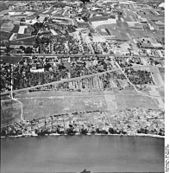 Beginning of federal highway 42, which was developed as a bypass, east of Geisenheim on August 12, 1953 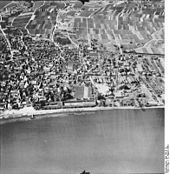 Oestrich with industrial area, quay facilities and portal crane before the expansion of the B 42 to bypass the town

The construction of the highway between Darmstadt and Mainz-Kastel was started in 1827 and completed in 1833.

In the area of ​​the Duchy of Nassau - from Biebrich am Rhein to Niederlahnstein - a continuous riverside road was only built after 1830. Before there was only a simple country road from Biebrich to Rüdesheim am Rhein , which was not improved until 1802. Until then, long-distance traffic only took place on the water. In the area of ​​the Binger Loch , the ships that could not pass here were unloaded and the goods were shipped over a high road, the Kaufmannsweg , between Rüdesheim and Lorch am Rhein over the Taunus main ridge. The construction of the Rheinuferstraße in the area of ​​the rock section was an important contribution to the creation of a modern road network in the newly created duchy.

With the original numbering in 1932, the then long-distance road 42 (FVS 42), renamed Reichsstraße 42 (R 42) in 1934, continued from Darmstadt to Aschaffenburg. This route was later replaced by Bundesstraße 26 . 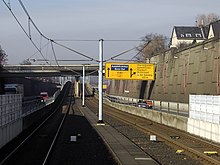 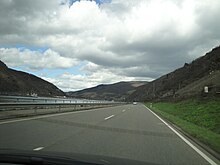 Drive on the B 42 down the Rhine shortly after Assmannshausen, on the left bank of the Reichenstein Castle and the camping site near Trechtingshausen , on the right bank of the Rhine the Wiesbaden-Niederlahnstein railway line ( right Rhine line ) under the Teufelskadrich , behind the vineyards of Lorch

In the early to mid-1980s, the B 42 at Königswinter and Bonn was given a new route in order to expand it to four lanes and to relieve Königswinter, Niederdollendorf and Oberkassel from through traffic. An expansion was not possible on the old route. The route section runs partly in a trough, partly in a tunnel. The Siebengebirgsbahn , a light rail line, was relocated at the same time in the median of the trough section. When they opened in the summer and winter of 1984, the tunnel and trough structures were the most expensive federal highway in Germany at 250 million marks (around 130 million euros). The start of construction was delayed by several years, as around 90 affected residents and smallholders sued him. In the 1990s, 160 steel anchors, each 30 meters long, were installed in the Oberkassel area to prevent landslides. The Drachenbrücke near Königswinter, which was completed in 1962, is expected to be renovated from the end of 2020 to the end of 2022 in order to repair the damage caused by the high loads. From 2021 the trough and tunnel structures will be renovated, including the "complete safety technology".

By raising the route at Erpel , which began on August 9, 2001 and was successfully completed in July 2002, the number of closures due to flooding could be reduced.

Between Bendorf and Neuwied, the B 42 has been expanded to four lanes with crossover-free connections to the BAB 48 in Bendorf and the B 256 in Neuwied . In the Neuwied-Irlich area to Leutesdorf , the road was built free from flooding. The flood-free expansion in the Hammerstein area began in 2010. A bypass was built between Rheinbrohl and Bad Hönningen . The flood-free expansion near Hammerstein was completed in September 2017 after 40 years of planning and six and a half years of construction. The expansion, including the noise protection measures, cost 14 million euros.

In Koblenz , the Glockenberg tunnel was completed on June 27, 2003 . It enables the Pfaffendorfer Bridge to be connected to the B 42 without crossing .

In Rüdesheim am Rhein , plans included relocating the B 42 to the route of the right-hand Rhine route . The railway line was to be relocated to a tunnel under the Niederwald by 2016 , which would have freed the city and the Assmannshausen district from rail traffic. The level crossing of the B 42 in Rüdesheim am Rhein, where long traffic jams often arise, would also have been omitted. The financing of the project, estimated at 234 million euros, was initially secured at the end of 2007 in agreements between the federal government, the state of Hesse, the city and Deutsche Bahn. At the request of the city of Rüdesheim and after consultation with the Hessian Ministry of Transport, the plans for the through traffic that should run on the old railway line after the tunnel was opened were changed. Even after the relocation, the B 42 was not to be a bypass , but to remain a main urban thoroughfare. Instead of pedestrian underpasses, five level pedestrian crossings with central islands were to be built. As a result, the opening of the planning approval procedure was delayed until spring 2010. It was expected that the total costs would decrease by up to 10 million euros, albeit with a corresponding delay in the start of construction and the completion of the overall project. In September 2012 it became known that the federal government had withdrawn from financing the project because it considered it to be uneconomical. Since the state of Hesse has now also declared that it will no longer provide funds, the realization is extremely unlikely at the moment.

In the years 1951 to 1961, the B 42 between Rüdesheim and Eltville was partially re-routed as a bypass road. The Geisenheim bypass took place until 1951, the Hattenheim bypass existed before the Second World War. The greatest challenge was the route of the bypass road near Oestrich, where there was an industrial area with quays. A gantry crane from Koepp AG took care of loading and unloading ships. In 1960 the so-called Oestricher Tunnel or Koepp Tunnel was finally built with a length of over 120 meters. It is a kind of elevated road on concrete stilts with an enclosure for the roadway, which enabled the neighboring companies to both cross under the B 42 and to load suspended loads without endangering traffic on the street. The quay facilities and the gantry crane have been out of operation since 1997. In July 2009 the crane was dismantled.

The route between Rüdesheim and Eltville, which is more than 15 meters wide, runs in the flood area on a raised road near the banks of the Rhine. In the 1970s, an expansion to the motorway was even planned, but this only led to a large Geisenheim-West junction in Geisenheim . However, five non-crossing connections are planned between Geisenheim and Eltville- Erbach . The plans are ready, but funding is questionable.

In 1989, after 30 years of planning, the Eltville and Walluf through-roads were replaced by a four-lane (2 × 2) bypass, which leads with four cross-free connections and three valley bridges through the vineyards north of Eltville am Rhein and Oberwalluf and near Wiesbaden-Frauenstein in the A 66 passes over.

The development of the B 42 is structured as follows:

On the section from Neuwied to Weitersburg, truck tolls have been levied since August 1, 2012. The truck toll has been in effect on the entire length of the B 42 since July 2018 .