This article covers the city of Lahnstein. For further meanings see Lahnstein (disambiguation) .

Lahnstein is a large city in the Rhein-Lahn district in Rhineland-Palatinate . It lies at the mouth of the Lahn , which flows into the Rhine five kilometers south of Koblenz . The districts are located in the Rhine Valley and on the heights of the foothills of the Westerwald and Taunus . Lahnstein is a climatic health resort with a spa center and thermal baths. On June 7, 1969, the city was formed from the previously independent cities of Niederlahnstein and Oberlahnstein . It is the seat of a local court . Parts of the city have been part of the Upper Middle Rhine Valley UNESCO World Heritage Site since 2002 . Ecclesiastically it is assigned to the diocese of Limburg (Roman Catholic) and the Protestant church in Hesse and Nassau .

The annual precipitation is 673 mm. The precipitation is in the middle third of the values ​​recorded in Germany. Lower values ​​are registered at 34% of the measuring stations of the German Weather Service . The driest month is February, with the most rainfall in June. In June there is 2.1 times more rainfall than in February. The rainfall varies moderately. Lower seasonal fluctuations are recorded at 47% of the measuring stations .

The Romans built a castle at the mouth of the Lahn in today's Niederlahnstein in 369 , which served as a border fortification and was a kind of guard post for the Fort Confluentes (today Koblenz ). The Lohenstein House, built on the remains of the Burgus, fell to Kurtrier in 1018, and the late Romanesque Johanniskirche was built on the same site in the 12th century . In Oberlahnstein , the Franconian Salhof came to Kurmainz around 900 .

Since 1226 the Archbishop of Mainz Siegfried III. von Eppstein Burg Lahneck to protect its area at the mouth of the Lahn, where the town of Oberlahnstein and the silver mine, which had been in Friedrichssegen since 1220, came to Kurmainz. The first mention of a burgrave at the castle was in 1245. The Archbishop of Trier Arnold II of Isenburg acquired the bailiwick of Niederlahnstein in 1256. The Martinsburg was built at the end of the 13th century as a base for exercising the Mainz customs rights on the Rhine.

The old town hall of Oberlahnstein was first mentioned in 1507. The plague broke out in Lahnstein in 1542. In 1569 a ferry line was built across the Lahn between Oberstein and Niederlahnstein. During the Thirty Years War , both parts of the city were occupied several times by Swedish, Imperial, French and Hessian troops. A first Allerheiligenberg chapel was built in 1671, the neo-Gothic successor building in 1895–1901. In the Palatinate War of Succession in 1688, Lahneck Castle was destroyed by French troops by setting the roofs on fire. Goethe , accompanied by Lavater and Basedow , docked in Lahnstein on July 18, 1774 on a boat trip on the Lahn and Rhine and had his lunch in the tavern on the Lahn.

During the coalition wars Ober- and Niederlahnstein were alternately occupied by Austrian, Prussian, French and Russian troops between 1795 and 1800. After the French had withdrawn from the right bank of the Rhine in the Peace of Lunéville , Lahnstein first fell to Nassau-Usingen through the Reichsdeputationshauptschluss of 1803 and then to the newly created Duchy of Nassau in 1806 . In 1852 the reconstruction of Lahneck Castle began. A first section of the Lahn Valley Railway from Oberlahnstein to Bad Ems was opened on July 1, 1858. On August 11, 1856, the first section of the Nassau Rheinbahn from Wiesbaden to Rüdesheim was opened. Because of the difficult construction work, the line was only extended to Oberlahnstein on February 22, 1862 and to Niederlahnstein on June 3, 1864, after the first railway bridge had been built over the Lahn in 1862.

After the Duchy of Nassau lost the German War on Austria's side in 1866 , it was annexed by Prussia . The now Prussian Lahnstein began work to connect its railway to the Prussian right-wing Rhine route by 1869 . Since 1873 a road bridge over the Lahn has connected the present-day districts of Ober- and Niederlahnstein. The bridge, which was last replaced by a new building in 1997, was named Rudi-Geil-Brücke in 2008 after the Lahnstein politician Rudi Geil . In 1902 Niederlahnstein was connected to the Koblenz tram. Between 1910 and 1912 Theodor Zais developed the Ruppertsklamm . After the First World War , Lahnstein was occupied by French troops between 1918 and 1929 as part of the occupation of the Rhineland . The synagogue in Oberlahnstein was destroyed in the Reichspogromnacht of 1938 . During the Second World War , Lahnstein was the target of Allied air raids in 1944 and 1945. After the war, Lahnstein came to the then newly founded state of Rhineland-Palatinate in 1946 . The barrage on the Lahn was completed in 1957.

On June 7, 1969 the merger of the previously independent towns of Ober- and Niederlahnstein to form the town of Lahnstein. Between 1971 and 1975, under the last mayor of Oberlahnstein, spa director Fritz Berlin, the new Lahnstein spa center with thermal baths and spa clinic was built on the initiative of the Lahnstein merchant Ernst Wagner (1920–1986) . It was recognized as a "mineral spring spa" in 1975. From 1977 to 1991 Max Otto Bruker was the medical director of the spa clinic. On March 30, 1977, Lahnstein became a separate district of Lahnstein on the Höhe, and in 1998 it was recognized as a “place with a mineral spring spa”. After the thermal baths were closed in 2006, this title was no longer valid in 2014.

As part of the expansion of the B 42 to a bypass road , the Lahntal Bridge and the Lahneck Tunnel were completed in 1979 . The city's cultural monuments have been part of the Upper Middle Rhine Valley UNESCO World Heritage Site since 2002 .

The city ​​council in Lahnstein consists of 32 honorary council members, who were elected in a personalized proportional representation in the local elections on May 26, 2019 , and the full-time mayor as chairman. Template: future / in 3 years

The Lord Mayor of Lahnstein is Peter Labonte (CDU). In the direct election on September 22, 2013, he was confirmed in office for a further eight years with a share of 58.9% of the votes.

Since 1956 Kettering English and since 1967 Vence , the French twin town of Lahnstein. In 1978 the West African Ouahigouya and in 1990 Hermsdorf in Thuringia were added. The fifth partnership of this kind has existed with the Italian city of Montesilvano since April 2016 . 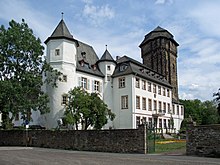 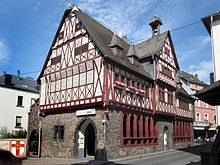 Tavern on the Lahn

Lahneck Castle
Built around 1226 by the Elector of Mainz and Archbishop Siegfried II von Eppstein with a 29 m high pentagonal keep . Spornburg with knight's hall , castle chapel , castle kitchen, tower ascent, etc. Hourly guided tours through the castle from Easter to All Saints' Day. Castle restaurant. The Rheinhöhenweg , Lahnhöhenweg , Jakobsweg (Lahn-Camino from Wetzlar to Oberlahnstein and on to Kaub ) and Rheinsteig from Wiesbaden to Bonn cross here . For a number of years, the Lahnstein Municipal Stage hosted theater performances, the so-called Castle Festival , in the side courtyard of the castle.

Martinsburg Castle
Built in 1298 by the Electors of Mainz as a customs castle and part of the city fortifications. Rebuilt several times, numerous baroque elements. Today there are private apartments, a doctor's office, a minting workshop and a carnival museum .

city ​​wall
With Hexenturm (1324) (including the Lahnstein town museum) and the remains of a Franconian royal court (977) on Salhofplatz. Parts of the old Oberlahnstein city fortifications can also be found in many other places, e.g. B. in the Hintermauerrgasse, where a branch of the city museum is located in the town wall house built around 1700.

Old Town Hall
Very well preserved half-timbered building from the 15th century in Oberlahnstein. Until 2015 the seat of the city archive, which is now located in the building of the former Kaiser Wilhelm School on Kaiserplatz.

St. James Hospital Chapel
Romanesque Jacob's Chapel on the Way of St. James - excavations found the bones of a Santiago pilgrim here, and a scallop shell was added at hip level.

Wenceslas Chapel
Building from the 14th century, in which the Roman-German King Wenceslaus of Luxembourg was deposed on August 20, 1400 . The chapel had to give way to a railway line in 1903. In 1905 the choir was built nearby using the original material and provided with a vestibule.

limes
The traces of the Roman border wall against the Teutons can still be found today over a length of 8 km in the Oberlahnstein city forest.

outdoor pool
At Lahneck Castle with a view of Stolzenfels Castle and the Rhine Valley.

John's Church and Monastery of the Congregation of the Sacred Heart of Jesus and Mary
Church from 1130 ( Romanesque pillar basilica ) on the remains of an older church from the 10th century. The private St. Johannes-Gymnasium is connected . The remains of a Roman burgus can still be found here, which the Romans built in 369 AD at the mouth of the Lahn. It served to fortify the border and was a kind of guard for the Fort Confluentes ( Koblenz ).

Tavern on the Lahn
Three-storey half-timbered building from 1697 with a customs tower from 1348. Johann Wolfgang von Goethe was a guest here on his Lahn tour on July 18, 1774, after he had written the poem Geistesgruß while looking at Lahneck Castle .

All Saints Mountain Chapel
Until 2012 the monastery of the Mission Society of the Huenfeld Oblates . Building from 1671. Neo-Gothic church from 1895. Place of pilgrimage .

Kindergarten Allerheiligenberg
Built according to the designs of architect Heinz Bienefeld and Jan Thorn-Prikker . The building was presented in the 1996 Architecture Yearbook .

Ruppertsklamm
wild and romantic gorge, which is particularly appreciated by the hikers of the Rheinsteig

Friedrichssegen Mining Museum
In 2000, the “Arbeitsgemeinschaft Grube Friedrichssegen ” opened the mining museum. Historical pit pictures (1905–1910) and more than 40 exhibits from Friedrichssegen minerals are exhibited here, including the so-called Emser Tönnchen .

Friedrichssegen hydropower plant
The power plant was built in 1906-07 to operate the Friedrichssegen mine. The three alternators from 1906 and the three Kaplan turbines from 1937 are still in operation today and generate an average of 4.8 kWh per year. The facility can be visited in the summer months.

Soccer
After the dissolution of the SG Eintracht Lahnstein club, a new soccer club was founded, the FSV Rot-Weiß Lahnstein.

swim
In Niederlahnstein there is a swimming pool where various clubs train.

Rhine in Flames
Large fireworks and ship convoy on the second Saturday in August along Spay , Braubach with Marksburg , Brey , Rhens , Koblenz-Stolzenfels with Stolzenfels Castle , Lahnstein with Lahneck Castle and the mouth of the Lahn to the fireworks display from Ehrenbreitstein Fortress in Koblenz .

Lahneck Live
Cultural festival formerly at the mouth of the Lahn (Niederlahnstein). The festival always takes place on the last weekend in May (Friday – Sunday) in the Rheinanlagen in the Oberlahnstein district and is linked to the Rhineland-Palatinate cultural summer. Entry is free!
Lahnstein municipal stage
Castle Festival
The Lahnsteiner Burgfestspiele are the oldest open-air plays in Rhineland-Palatinate. After Lahneck Castle and Salhofplatz had previously served as a venue, they have been taking place in summer on an open-air stage in front of the Johanniskirche in Niederlahnstein since 2017 .
Lehner fair
Always on the first weekend in September in Niederlahnstein
Oberlahnsteiner fair with city festival
Always on the second weekend in September
Rose Monday parade
In Oberlahnstein
Cap trip on Shrove Tuesday
In Niederlahnstein
Children's and young people's parade on Shrove Tuesday
From Nieder- to Oberlahnstein
Lahnsteiner two rivers run
Fun run on the first Friday in June along the Rhine and Lahn.
Rhineland-Palatinate Championships in Guard Dance
For children and juniors in the town hall, every 3rd Saturday in September.
Lahnsteiner Blues Festival
Annually in autumn, since 1981 as SWF-, from 1998 to 2005 as SWR-Blues-Festival with the exception of 2001.

Map of the railway facilities in the greater Koblenz area 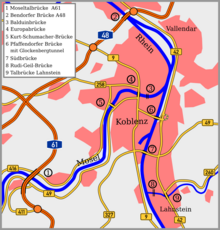 Road map of the Koblenz area