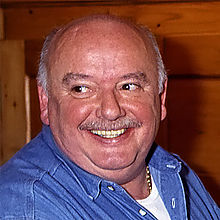 He was best known in 1983 as the author of the " Hitler Diaries " that triggered a press scandal . He had sold these to the weekly magazine Stern for 9.3 million DM, stating that they were private documents written by Adolf Hitler himself. According to a documentary about Kujau, it was “ probably the greatest Eulenspiegelei in post-war history ”.

The Kujau family was torn apart during the air raid on Dresden in February 1945. Konrad Kujau then spent his childhood and youth in an orphanage until the family members reunited in 1951.

Kujau graduated from elementary and high school in his hometown. There he was already drawing during his school days and published a. a. Caricatures in various publications such as the Sächsische Zeitung , the Junge Welt , the Frösi magazine or the Eulenspiegel . He improved his pocket money by selling autograph cards with deceptively real imitation signatures of GDR politicians at the time.

In the period after graduating from high school (1956) until July 1957, he was enrolled at the Dresden Art Academy . Then he went from the GDR to West Berlin . In 1958 he began studying at the Stuttgart Art Academy . During this time Kujau learned from painters and restorers, whom he helped. In 1961 he broke off his studies and worked himself as an artist. He lived in Bietigheim-Bissingen together with his then partner Edith Lieblang .

Kujau came into contact with the Hamburg reporter Gerd Heidemann through a group of confessing old Nazis . Through this contact, Kujau succeeded in selling 62 volumes of so-called Hitler diaries for 9.3 million DM to the news magazine Stern until the forgery was discovered on May 5, 1983. The forgeries were so cleverly prepared in terms of content and appearance that serious experts like the British historian Hugh Trevor-Roper were deceived for weeks. Only a chemical analysis of paper by the Federal Archives in Koblenz brought the forgery to light.

In the trial of the forged diaries before the Hamburg Regional Court , Kujau was sentenced to four years and six months imprisonment for fraud in July 1985 , but was released after three years for his severe larynx cancer .

Konrad Kujau in front of his work Labyrinth of Time , 1992

After his prison sentence, Kujau took advantage of his gained popularity. After the Barschel affair, he appeared as a counterfeiting expert on Spiegel-TV . He also opened his own atelier in which he officially sold "original Kujau forgeries". His fame was increased by the filming of the story about the forged Hitler diaries in the film Schtonk! . Furthermore, Konrad Kujau released an album with the Rock & Roll Junkies on Rude Boy Records in 1995 called Rebellen der Kunst . In these songs he dealt with the counterfeit scandal.

In 1992 Konrad Kujau made headlines again. On January 4th, the Bild newspaper reported in large letters "The new coup from the forger - Kujau paints phone cards for the post office minister". Under this title, a local editor of Bild Stuttgart reported on a meeting between Kujau and the then Federal Post Minister Christian Schwarz-Schilling during the radio exhibition in 1991 in Berlin. In a caricature, Kujau painted the minister as a telephone receiver that Chancellor Helmut Kohl pressed to his ear. According to the Bild newspaper, Schwarz-Schilling liked this so much that, thanks to Kujau , he was going to issue counterfeit paintings on real telephone cards of the Deutsche Bundespost.

Kujau also showed an interest in politics: in the 1994 federal election he ran for the motorists' party . In 1996 he stood for election in Stuttgart as candidate for mayor; he received 901 votes. Until shortly before his death in 2000, Kujau mainly worked as a painter in his studio, although he had previously held exhibitions in Pegnitz in Upper Franconia .

Konrad Kujau died of stomach cancer in September 2000 and was buried in the Protestant cemetery in his native Löbau in the district of Görlitz . 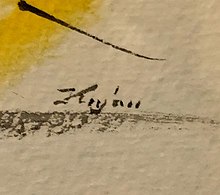 Signature on an original Kujau forgery.

Kujau also officially sold original Kujau fakes . These are images forged by Kujau by painters of various eras and styles, which, in addition to the respective artist's signature, also bear the Kujau lettering and therefore do not represent falsifications in the legal sense. These works became so popular with collectors that they were in turn forged. From 2006 onwards, a flood of counterfeit Kujau forgeries appeared on the Internet auction house eBay . According to the public prosecutor's office, revenues of up to 3,500 euros per image are said to have been achieved and total damage of more than 550,000 euros was caused. In 2010, the responsible saleswoman, according to her own statements, an extensive relative of Kujau, and her partner were sentenced by the Dresden Regional Court for fraud in 40 proven cases (out of 301 initially charged) to a two-year prison term on probation and community service. Many of the affected buyers stated in court that they still did not want to part with the purchased images. One of these counterfeit forgeries, a painting in the style of Gustav Klimt , is in the Forgery Museum Vienna .

In April 2013 it became known that Marc-Oliver Boger, a collector from Bietigheim-Bissingen, was planning a private museum with works by Kujau. The official opening of the Kujau-Kabinett in Bietigheim-Bissingen took place on Wednesday, November 22, 2017.