Nassau - Excerpt from the Topographia Hassiae by Matthäus Merian 1655 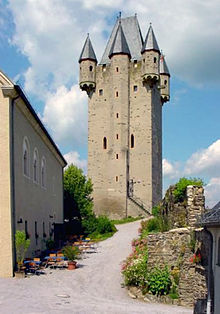 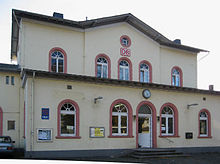 Nassau is a town in the Rhein-Lahn district in Rhineland-Palatinate and belongs to the Bad Ems-Nassau community . Nassau is a state-approved climatic health resort and designated as a basic center according to state planning . The city is ecclesiastically assigned to the Diocese of Limburg (Roman Catholic) and the Evangelical Church in Hesse and Nassau .

The city is embedded in the Lahn valley between the cities of Koblenz , Bad Ems and Limburg an der Lahn and lies on the German-Dutch holiday route Oranier Route . The federal road 260 , also called Bäderstraße, connects the cities of Wiesbaden, Schlangenbad, Bad Schwalbach, across the Taunus to the Lahn, with Nassau and Bad Ems.

Nassau was first mentioned in 915 as the manor belonging to the Bishop of Worms as "Villa Nassova". At that time it was a labor court of the German King Konrad I , the center of his estate and forest district between Sayn , Rhine and Lahn. Around 1100, the Counts built by Laurenburg the Nassau Castle , after their descendants called themselves since 1160th So it became the ancestral seat of the counts of the Nassau family , who still rule Luxembourg and the Netherlands today .

With the granting of town charter on July 26th 1348 together with Dausenau and Schüsten by Emperor Charles IV , Nassau started a clear upward trend compared to the non-privy villages in the area. Trade and industry flourished, Nassau became a court and received "rights, freedoms, honor, dignity and utility, like other cities in the empire". In this context, Nassau built its city fortifications with towers and walls, of which only two towers and a few remains of the wall are still today.

Nassau was different lines owned by the House of Nassau and belonged from 1806 to the recently completed Duchy of Nassau , which was 60 years in 1866 by Prussia annexed was. Until 1885, Nassau was the official place of the Nassau office and from 1868 until the end of World War II it was part of the Prussian province of Hessen-Nassau .

On February 2, 1945 there was a first and on March 19, 1945 a second surprise air raid by Allied bombers on Bad Nassau. This took place even though the place was designated as a spa and hospital town and the roof of the Kurhaus as well as the Cologne home and the Nassau hospital (Henrietten-Theresen-Stift) were marked with a Red Cross. In these two major attacks, almost 80 percent of the city center was destroyed by incendiary bombs ( phosphorus bombs ) and up to 300 people lost their lives, an estimated 100 of them in the area of ​​the bombed Kurhaus (250 beds). The chief physician, doctors, nurses as well as the entire staff and many unidentifiable patients fell victim to the bombs. Later the badly damaged health resort and hospital for wounded soldiers was demolished and not rebuilt. This led to the revocation of the status of a spa town. The healing spring in the immediate vicinity of the Lahn was hit by aerial bombs and has since dried up. The reason for the two air raids was given by the Allies that the Nassau train station had served as a loading station for ammunition and launch pad components for the V2 rocket in the first quarter of 1945 .

Since 1946 the place has been part of the state of Rhineland-Palatinate . The 1348 freed-up place Schänen (first mentioned in 1163 as "Schura") was incorporated into the city of Nassau on June 7, 1969 with Bergnassau (first mentioned in 1262 as "Berg Eldig"). The Verbandsgemeinde Nassau was formed in 1972 by state law and became part of the new Verbandsgemeinde Bad Ems-Nassau in 2019 .

The city ​​council in Nassau consists of 20 council members, who were elected in a personalized proportional representation in the local elections on May 26, 2019 , and the honorary city ​​mayor as chairman. By 2009 the city council had 22 council members.

The city mayor is Manuel Liguori (SPD) , who was directly elected on June 16, 2019 . The decision was made in a runoff election , as none of the original three applicants had achieved a sufficient majority in the direct election on May 26, 2019.

In the 19th century, mining near Nassau was a major economic factor.

The association TVB Nassau played with the men's table tennis team in the 2nd Bundesliga at the end of the 1980s . Today the athletes are still active in the Regionalliga Südwest. There is also the general sports club TV 1860 Nassau , which includes offers in several directions, such as athletics, gymnastics, gymnastics or preventive sports .

Personalities who worked in Nassau

Nassau in the home yearbook of the Rhein-Lahn-Kreis